For those of us up north, summer is upon us. Biking season is in full swing. And we all know what that means, right? Flirting season. Yes, bicycle flirting. 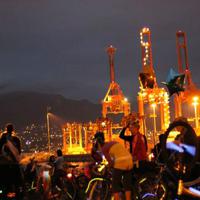 Drunk Cycling in the City

Don't deny it. We all do it: the stop-sign smile; the bike-beside-you banter; the "accidental" cut-off conversation. Let's face it. For all the endearing and often-celebrated qualities of cycling -- the health and environmental benefits, the easy-on-the-wallet and coolness factors -- the fact that cycling is the ideal vehicle for flirtation is by far one of its most grossly overlooked and unsung attributes.

It's all about the endorphins

Several studies over the years have produced statistics identifying cyclists as the happiest of all commuters. After years of rigorous fieldwork studying the bicycle flirtation phenomenon firsthand, I would argue it's no coincidence -- many of the qualities that give cyclists the most joyful commute are the very same that keep cycling high on the mode-share flirtation index.

For starters, there are the endorphins. We all know that cycling, like running or other forms of exercise, releases endorphins in our bodies that, well, make us feel good. They relax us and put us in a better mood. I don't know about you, but I'm not much of a talker -- let alone a flirter -- when I'm cranky.

Science may tell us that cycling puts us in a good mood, but I don't need science to tell me that the better the mood I'm in, the more likely I am to flirt. So, in a way, you could say that simple biology alone predisposes cyclists to pro-social and flirtatious activity.

But there's more to it than chemicals. Along with an abundance of opportunities for interaction comes an element of control over those interactions that other travel modes don't offer. Drivers and transit commuters alike report feeling trapped or out of control of their commutes contribute to their frustration. The flexibility of the bicycle gives cyclists a sense of freedom.

That sense, I think, transfers over to our interactions with other people. You may be able to strike up a conversation while walking or riding mass transit, but the nature of those modes makes it a riskier move: if the interaction is unwelcome or doesn't go well, there is no graceful and subtle exit like that which cycling provides.

Someone speeding up their pace while walking in order to get away from you after you've complimented their shoes will leave you looking and feeling like a Class-A creep, especially since all the people around you probably heard the interaction. Even worse, a bus or train will leave both you and the subject of your flirting cringe-worthily trapped in cramped quarters. Awkward.

But the natural speed, flow and flexibility of direction and route when cycling frees both flirter and "flirtee" of this conundrum, making it easier to create moments of private interaction and to exit them. Even eye contact and a little smile -- enough flirtation to mildly brighten one's day -- is less threatening when you know you won't be standing inches from the person's armpit for the next three stops.

Conversation starters are a heck of a lot easier to launch by bike as well. Compared to, say, transit riders, who don't often have a part of their identity wrapped up in their transportation mode, cyclists, as a breed, like to talk shop. Starting a chat on a bike route about traffic changes, the weather (as it naturally relates to cycling), recent bicycle politics or another cyclist's bike gear is a lot more natural than trying to strike up conversations about, say, fare hikes or the bus's new upholstery. For some reason, that's simply odd behavior.

Mix that with the natural empathetic impulse and camaraderie that comes with a shared sense of purpose, challenge and vulnerability, and you have a recipe for bonding encounters that make us feel connected and part of something -- a recipe for Emotional Cityness, in fact. And that's attractive.

So go ahead, celebrate the summer season right. Grab your bike, put on something cute and get ready to find love.

(P.S. To ensure I wasn't alone in my bicycle flirtation, I did some fieldwork on the bike route outside my house. Hear Vancouverites' personal stories of bicycle flirtation, and their in-depth analysis of the phenomenon in the videos above. There is a sad note to the stories, though: a couple hours of coyly chatting up cyclists about their flirtation habits didn't yield even a single date for me. Honestly, Vancouver.)