[Editor's note: This is drawn from an address the celebrated painter Robert Bateman gave at the convocation for Royal Roads University in Victoria on June 18, 2010. Bateman was awarded Doctor of Laws, honoris causa for his art and conservation efforts.]

Since I am now an octogenarian I am going to invoke the privilege of handing out advice and opinions. I will be quoting various people from Mark Twain to the Rolling Stones as I go along. Mark Twain said, "Growing old is a question of mind over matter. If you don't mind, it doesn't matter." That same advice could apply to so many things in life -- very Buddhist. Twain also said, "Some of the worst things in my life... never happened." 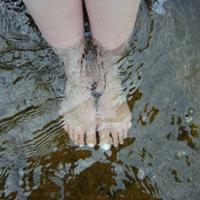 When Neighbourhoods Work With Nature

That leads me to my first piece of advice. DON'T WORRY. I mean it. Worrying makes no sense. Either do something about the problem if you can, or, if you can't do something, forget it.

I know that's easier said than done so here is my second piece of advice: PROCRASTINATE. I don't mean procrastinate about duties to be done. Don't be a shirker. I mean procrastinate about worrying. Say to yourself, "I'm OK at the moment so I will worry about the problem later." Some of the worst things in your life may never happen so why build up your own bad cortisol hormone and maybe raise your blood pressure and shorten your life for no point at all? If you keep procrastinating your worry, time will likely take care of everything (as my mother always said). I tried this a few years ago when I had a cancer scare and it seemed to work. Action is good but worrying has bad side effects. I've sometimes found it helpful to pretend that I'm in a movie.

Here are a couple of other tips in the worrying department. Try the three-breath meditation. I am a hopeless meditator but I seem to be able to be mindful for three breaths. Ten is stretching it. If you are stressed, stop, relax your toes, relax your tongue, think about your finger tips and take three slow, conscious breaths... small investment for good results.

What about the problems of the planet? I am well aware of the problems of the planet but I don't wreck my days or nights obsessing about them. If you find yourself worrying about the state of the world, go outside, take your three breaths, address a tree and quietly say thank you. If you can't find a tree a dandelion will do. Gratitude is a good idea and it is very underrated in our society. We definitely owe gratitude to the plant kingdom. They are on our side. So pick your tree and express gratitude to it as a representative of the world's flora. Go for a walk in nature even for a few minutes every day.

There is a recent practice in Japan called "forest therapy". Stressed office workers are taken for a half-hour walk in the woods -- that's all. Their bad cortisol comes down, their blood pressure comes down and their immune system improves. Research shows that this lasts for days or even longer. Nature is magic.

Do you worry about the state of the world? Personally I don't lose a wink of sleep over the disasters happening to the planet. I try to do what I can in my own way -- write letters, rant, make a donation, etc., and then enjoy life on this beautiful planet. Follow E. O. Wilson's advice; fall in love with life on earth. Love is better than fear. You are wasting your life if all you do is fret about such things. And you might only have one life.

My next piece of advice is to never, ever harbour resentment. That is like mixing a cup of poison and drinking it yourself. It will wreck the inside of your body and your head and it likely will not bother the target of your resentment at all. I never took a course in philosophy but one of my favourite philosophers was Spinoza who lived in 17th-century Holland. He refused to admit that he was ever being shafted. When people told him that he was being taken advantage of, he wouldn't listen. He said, "The sun is in the sky and God is in the heavens and those kind of thoughts are not useful to my well-being." Spinoza was kindly and did not want to hurt people's feelings. He did not call a spade a spade unnecessarily.

Being nice and having good manners is a good idea. Being angry and yelling at people is a bad idea. As a teacher for 20 years I only raised my voice once a year or never. In any given conflict situation, ask yourself, "How do I want this to turn out?" You are much more likely to get your own way with sweetness than with grumpiness. Self expression is usually good but when it takes the form of hurtful frankness or aggressive communication it is usually bad for everyone, including the aggressor. This kind of self expression can turn into destructive self indulgence.

By the way, in case you take me for some priggish goody-goody -- I don't claim to always follow my own advice. I don't give this advice so that you may help others. This is to help yourself. I may be more Machiavellian than you think.

Now I want to quote Oscar Wilde. He said, "Surely Niagara Falls is the second great disappointment in every American marriage." I disagree with Wilde about marriage but kind of agree with him about Niagara Falls. In my view marriage is a good idea (I've even had two of them). It is great to have a life companion to share things with (I'm also big on sharing). Hanging out with one person for decades can have issues. So here are a couple of ideas that might smooth the way. Limit complaining about the other to a minimum or none at all. Don't ever blame. And try to find at least one complimentary thing to say to those near to you every day.

Now, turning to Niagara Falls. It is overrated. From a visual point of view it is a long, grey blob. You don't need to go to Niagara Falls for beauty. Take a few steps in nature and admire a clump of leaves. Even a dead maple leaf has more visual excitement than Niagara Falls. To quote Stephen Fry, "There is moral force to aesthetics." And here is a quote from the movie The Colour Purple, "I think that it pisses God off if you walk by a field of flowers the colour purple and you don't even notice." Don't piss God off. Whether you believe in Him or not, it is not a good idea... again, gratitude is great.

You and I know that Royal Roads University is the most beautiful campus in the world. I hope that you realize that this aesthetic moral force has infused your being in subliminal good ways that will last you for the rest of your life. This aesthetic moral force [is] an important aspect of the Bateman Centre [opened this year in Victoria] -- the setting, the architecture and perhaps even the art.

Here is another wild, aesthetic quote from the aforementioned Oscar. When he was asked, "Why is America so violent?" (evidently America used to be violent back in the 19th century), he said, "I will tell you why America is so violent; its wallpaper is so ugly." I don't know about the wallpaper but Wilde cared about aesthetics -- we all should.

Moving along to my next advice... do not ever complain about work... that is unseemly and not helpful. You brainwash yourself with the "poor me" syndrome. You are lucky to be able to do work. Say "How wonderful!" when facing a sink full of dishes. To misquote Crosby, Stills and Nash, and maybe Young, "When you can't be with the job you love, then love the job you're with." Or the Rolling Stones... "You can't always get what you want, but if you try sometime, you will find you get what you need." Play the ball from where it lies and do not complain about it. Whining brings you down.

Finally, here is an opinion on the importance of memories. John Huston, the Canadian Inuit expert and film director, grew up at Cape Dorset. He loves to go back and travel the tundra. Many Inuit were puzzled why a white guy would leave the comforts of southern Canada and travel the wilds of the north. So they asked him, "What are you really doing here?" He said, "I am wandering around gathering fond memories." They said, "Hmmmmm... good idea." Gathering memories is what we all are doing in life... let's hope most of them are fond.

By contrast, I will now quote John Gotti, the Mafia boss. "At the end of your days, all you've got are memories. Make them."

I hope that you will always say to Royal Roads, "Thanks for the memories."

I will close with one more quote from Oscar Wilde. He was almost alone on his deathbed in a garret in Paris. He turned his head to the wall and said his last words, "Either this wallpaper goes or I go." With that, he went. And now, in a different way, I will also go.