The world has lost a renowned scholar, Canada has lost a committed citizen, and this publication has lost an irreplaceable source of wisdom, insight and support. Michael Fellman died Monday. 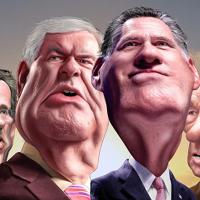 Why America's Politics Seem out of Control

Michael contributed 33 articles over the past eight years to The Tyee. Most often for our readers he fastened his brilliance on American politics and their resonance in Canada, whether dissecting elections, Clint Eastwood movies, the Blues, the devastation of New Orleans, or a trend that troubled him greatly, the rise of militarism in this country.

"Militarism," he wrote with prescience in these pages five years ago, "is seeping into Canadian ideological and institutional life, with highly dangerous short-term and long-term implications. Yet we hear precious little outcry from the public or in the media, and this relative silence only encourages those controlling the levers of power to continue this development."

This was a subject Michael Fellman was eminently qualified to comment upon. He was a giant among chroniclers of the U.S. Civil War. Even one of Fellman's most noted critics acknowledged, "No other book has had more influence on the writing of Civil War history than Inside War," published by Michael in 1989. That book, and his many other masterful social histories unflinchingly documented the toll taken on civilians -- psychically as well as physically -- by brutal war fighting measures given less attention by colleagues who preferred the Great Man theory of history.

"I disbelieve in heroes," wrote Michael, "searching as I do to understand the motives and actions of human beings rather than to present stylized paragons of good and evil."

Such hard nosed humanitarianism in Michael, always tempered by laughing wit, made him the most pleasurable companion. On the afternoon of Sept. 11, 2001, as the horrific images played over and over on the television and none of the talking heads seemed to be able to place any of it in context, Michael called and suggested we walk and talk. What a gift it was that afternoon, as it was any time Michael and I got together, to be able to spar one moment, to muse aloud together the next, and to be able to hug goodbye afterwards. The grounding guidance he afforded me was a gift that many received from Michael, for he was famous as a master teacher and mentor during his long career as a professor at Simon Fraser University.

Michael was a clear-eyed optimist whose years spent unearthing the grim record of America's internecine guerrilla war did not undermine his fundamental faith in reason and humanity. He said that he chose the Civil War as his recurring focus because its archival sources were so rich -- the last uncensored war, he called it -- and because the racial and economic inequalities so powerfully at work then so evidently had not been resolved by that terrible conflict. The wounds linger even today, and so their origins, believed Michael, were in constant need of honest scrutiny.

"What I believed I was doing ... was challenging not only the master narrative of the Civil War but of America as the land of ever-unfolding liberty and justice for all."

He wrote that in his last book, Views from the Dark Side of American History, which in some ways invented a new form, the book itself being a history of Michael Fellman's maturation as a historian, in which Michael employs reflective memoir as prefaces to various important essays from his lifetime of work. He had quite a bit to reflect upon, having written highly acclaimed biographies of Union General William Sherman, Confederate General Robert E. Lee; a post 9-11 challenge to American notions of exceptionalism titled In the Name of God and Country: Reconsidering Terrorism in American History, and the groundbreaking Inside War mentioned above. When the New York Times wanted the sharpest minds available to revisit aspects of the Civil War on its 150th anniversary last year, Michael was top of their list to contribute.

He never tapered off in his intellectual bravery and feistiness. Invited to give a talk on Robert E. Lee in the spring of 2002 in Richmond, Virginia, where to many Lee is a legend of high minded chivalry, Fellman forthrightly presented the historical record showing Lee to have been deeply racist even by standards of the day and a rallying figure for those who, after the Civil War, established a segregated South that kept African-Americans disenfranchised for another century.

Upon being told that the conference sponsors were outraged by his speech, Michael responded that he didn't give a damn. And when, the next day, supporters came forward, Michael drew hope from this sign that attitudes can change, providing "one of the most emotionally complex, edgy and ultimately rewarding experiences of my life as a historian. I believed I had spoken out of my convictions. I felt freedom."

For all his fascination with America's troubled character, Michael was a confirmed Canadian, poring over the Globe and Mail, glued to the CBC, parsing the national political and cultural life with his usual fine-toothed analyses. He well appreciated the special pleasures that life on the West Coast afforded. He was especially happy watching the deer amble by from his deck on Pender Island, or gazing over English Bay from his apartment in the West End.

Michael leaves behind his soul mate Santa Aloi and children and grandchildren about whom he was always bursting with pride whenever we talked. Here is the statement about Michael's passing prepared by friends and family and circulated yesterday:

"Suddenly after a brief illness on Monday, June 11 at the age of 69. Michael was born in Madison, Wisconsin and completed his undergraduate studies at the University of Michigan. After receiving a PhD from Northwestern University he moved to Vancouver in 1969 to take up a position in the History Department at Simon Fraser University where he taught until his retirement in 2008. He was renowned as a historian of the American Civil War, a bold and provocative scholar who challenged the academic status quo constantly and put forward new and illuminating interpretations in such books as Inside War: The Guerrilla Conflict in Missouri During the American Civil War and In the Name of God and Country. Michael spoke out passionately in the press on various political issues and embraced humanitarian and liberal causes throughout his life. He was a board member of the College of Psychologists and Dancing on the Edge Festival, and a past board member of Jewish Family Services Agency. Michael was a fiercely devoted husband, brother, father, grandfather and friend. He was passionate, generous and lived life to the full embracing with gusto everything that interested him -- his second home on Pender Island, baseball, the West End farmers' market, the arts, walks on the seawall, fine food. He is survived by his wife Santa Aloi, sister Laura Fellman, sons Joshua (Mei Ning Chang) and Eli (Liz Scanlon), granddaughters Sara and Becky, grandsons Sam and Isaac. Michael enriched the lives of many and all those who knew and loved him mourn his loss."

In his final book, Michael reflected on his approach to scholarship, and in so doing, I think, he described his stance towards life:

"Truly engaged history writing is anarchic or at least irreverent. It challenges authority; it is the assertion of freedom of thought against the constraints of received wisdom; it is the individual declaration that one need not be neutralized by the powerful fear of being isolated or derided, that one can find one's own voice."

Michael's voice lives on in the genius of his many writings. To have been able to share that voice with others has been one of the great privileges of my life. Michael's voice lives on, too, in the fine counsel and support he has given so many, myself among those blessed. Michael's voice remains at once special and exemplary, infused (as it was every time we met and talked and hugged) with hard-won knowing, humour and loving spirit.

A memorial service will be held to honour Michael Fellman at 1 p.m. on Friday, June 15 at Mount Pleasant Funeral Home, 306 E. 11th Ave., Vancouver. In lieu of flowers, donations can be made to Knowledge Network, Dance Centre, Crisis Line, or Jewish Family Services Agency.