It's been the weirdest couple of weeks in Europe that I can remember in quite a while. The odd natural phenomenon that grabbed everyone's attention is a cloud of volcanic ash from Iceland. It blanketed Europe and shut down all aviation traffic over the continent for an unprecedented six days (twice as long as the shutdown of American air space after "9/11"). Toward the end of the week, planes were mostly back in the air, and airline officials in London, Paris, and Frankfurt were scrambling to deal with the backlog of hundreds of thousands of stranded passengers. 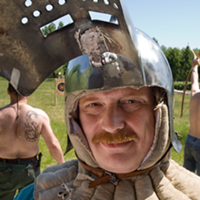 The ash cloud was a traveller's nightmare, of course. As the British poet laureate, Carol Ann Duffy, who weighed in with a short poem published in The Guardian, put it, "the grounded planes mean ruined plans / Holidays on hold, sore absences at weddings, funerals... wingless commerce."

Apart from producing the ultimate Holiday From Hell, the cloud was spooky. Over Europe, it was invisible. It was an unseen object poised between intimations of Armageddon (an ominous "what next?" feeling) and the sort of surrealism you might run into in a Rene Magritte painting. Poet laureate Duffy wasn't the only one inspired to poesy. The headline of a Sunday newspaper I glanced at last weekend while strolling through the marketplace square in the German town of Erfurt, declared, "The sky is free," meaning free of noisy, polluting airplanes. And one did notice, with a sort of aural double-take, that something was strangely absent. The ambiant, sporadic roar of jet engines that we all simply become inured to in urban life had temporarily fallen silent.

In Iceland itself, the ash cloud was neither invisible nor poetic. The spewing ash from the almost unpronounceable Eyjafjallajokull volcano (its first eruption since 1821) was not only visible as a giant cloud, but the heat melted glacial ice, causing flash floods, visibility was reduced to a few metres as ashes clogged the air, and the sulphuric smell of rotting eggs choked the atmosphere. It was one more mess to add to the island's already messy collapsed economy.

Back on the European mainland, the ash cloud, poetic or just a pain in the butt for people trapped in airports, was mostly an object of economic contention. Although European Union air traffic officials had grounded planes because the volcanic ash clogs jet engines and endangers flight safety, the airlines themselves were insistent that commerce comes first. The aviation companies claimed that the danger was minimal, that they were losing hundreds of millions of euros a day, and that they might be driven out of business or have to demand government compensation for their mounting losses. As far as the airlines were concerned, they were perfectly happy to flood the ash-clogged skies with their big machines. If a few planes crashed, well, hey, stuff happens. (No, they didn't actually say that, but you read it between the balance sheet lines.)

The airline pilots association was, understandably, somewhat less enthused about the proposed policy to restore profits. In the end, airplane manufacturers came to a dubious rescue by assuring everyone that maybe the ashes wouldn't cause the planes to crash. Whatever. The flight ban was lifted.

The lesson (about business and morality) was reasonably clear. The EU public officials may have been a bit over-cautious, but if the safety decision had been left in the hands of private enterprise, flying travellers would have been putting their lives in the hands of corporate accountants. The other minor lesson, although no one is going to do anything about it, is that there are simply too many airplanes doing too much flying, all in the name of business. The "budget" airlines that fly people short distances within Europe are a completely unnecessary menace and source of pollution. The one thing Europe has is a great train system that efficiently and with minimal ecological disruption gets people from place to place. Filling the sky with giant Sports Utility Vehicles for short hops is solely a commercial proposition. Okay, okay, this is an argument I'm not going to win, even among the iPod-listening, cellphone-chatting, texting-and-travelling public.

One of the things that media coverage of the volcanic ash cloud blotted out almost completely was reflection on the April 10 air crash at Smolensk, Russia that killed Polish president Lech Kaczynski and 95 others, including a large contingent of the country's military and governmental elite. Kaczynski and his party were on their way to a memorial ceremony marking the 70th anniversary of the Soviet slaughter of 22,000 Polish military officers in the nearby forest of Katyn in 1940, at the outset of World War II.

For years, the Soviets had denied causing the massacre, and only in recent times had Poland and Russia patched up the historical dispute with Russian recognition of responsibility for the atrocity. A couple of days earlier, Russian Prime Minister Vladimir Putin and his Polish counterpart, Donald Tusk, had met at Katyn to acknowledge the belated agreement on what had happened. The decision to hold a larger ceremony to memorialize an historic tragedy produced only an additional contemporary tragedy, or as one New York Times headline had it, "Where history's march is a funeral procession."

In the immediate aftermath of the catastrophe, it quickly became clear that it was one of the stupidest air crashes imaginable. The weather was foul and foggy; the air traffic controllers had warned off the Polish plane and recommended they land elsewhere. But either somebody decided to risk it, or there was a failure of communication, or... who knows? The plane clipped the tops of trees near the Smolensk landing field and the tragedy of 96 lost lives was added to the ashes at Katyn.

Most media attention to the crash was focused on the late president Kaczynski and the national outpouring of grief that surrounded his controversial burial at Wawel Castle in Cracow, Poland, the burial site of Polish kings and heroes. A lot of people thought that Kaczynski’s accomplishments hardly merited internment among Poland's major historical figures. Even former Polish president and former Solidarity leader Lech Walesa, 65, acknowledged the burial anomaly, remarking that since it was a decision of the Catholic Church, he would have to accept it.

Although Kaczynski was widely praised in death as "our president," in life, the right-wing leader had a less than 30 per cent approval rating among Poles and was considered unlikely to win re-election this year (the election has now been moved up to mid-year). Both Kaczynski and his twin brother Jaroslav, a former prime minister of Poland, were known for politics that were economically conservative, strongly nationalistic, and blatantly homophobic. When he was mayor of Warsaw, Lech Kaczynski had attracted notoriety for shutting down gay pride parades.

Most Poles I've talked to in the wake of the crash emphasize that their grief is directed to the large number of prominent fellow-and-sister citizens who perished, and not to any particular elected official. As Polish novelist Olga Tokarczuk put it, "From death's perspective... there are no presidents or flight attendants... There is just the person, always dear."

As it happened, I knew, however faintly, one of those who died in the Katyn crash. She was 80-year-old Anna Walentynowicz, the heroine, in 1980, of the Solidarity trade union strike at the shipyards in Gdansk, Poland, that presaged the end of communism in Poland a decade later. She, along with Walesa and others, was among the leaders of the most significant workers' revolt against a "workers' state" in a half-century. I interviewed the then 50-year-old former welder and crane operator in Gdansk in spring 1981, just months after the trade union strike that would eventually transform Polish society.

"Pani Anna," as she was known to everyone in the shipyards, was a soft-spoken, small, middle-aged woman in a floral print dress. When I asked her, since I was attempting to construct a journalistic account of the historic events in Gdansk, she gave me a minute-by-minute account of her experiences during the first day of a strike that would flash the famous "Solidarnosc" logo around the world. What one couldn't discern simply from her appearance was that Walentynowicz was a veteran political activist. She'd begun as a Communist Party member, stormily quit when the communists so obviously failed to live up to their ideals, and became part of the workers' opposition, one committed to the creation of a genuine workers’ council-type society.

Walentynowicz was unlike many of the people associated with Solidarity. She was not a right-wing anti-communist, a strident nationalist, or a religious activist, all of whom could be found in the divergent Solidarity coalition. One of those conservative figures, by the way, was future president Lech Kaczynski, then an advisor to strike leader Walesa and eventually a Solidarity member of the Polish parliament as a result of the first free elections in 1989. By contrast, Walentynowicz broke with Walesa as the labour leader who became the first modern Polish president drifted to the right.

For a journalist, meeting her was a brief but memorable brush with history. Certainly, the circumstances of that encounter were headier and more hopeful than Poland's trudge into post-communist capitalism turned out to be. Yes, you mourn real people when the plane goes down, but you also mourn dreams, and want to be sure that the dreams as well as the people aren't forgotten.

There was scant time to remember before the volcanic ash cloud arrived. It prevented international leaders, including U.S. President Obama, from attending the Polish burial services. And now that the planes are back up, our distracted attentions will no doubt be directed elsewhere. For a moment, though, a pause to consider the mortal course of ashes to ashes.