When Jerry LeBourdais learned that big agribusiness couldn't handle the Cariboo potato, he knew he'd found a variety that he wanted to support. The name didn't hurt either. If there was a potato out there named "Cariboo," it had a natural home on the back-to-the-land commune near Williams Lake that LeBourdais had founded. 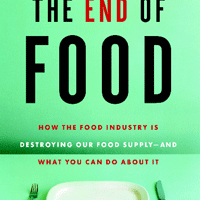 Will We Ever Eat Well Again?

All he needed was some seed. It sounded simple enough.

"Jerry wanted to get a hold of some, and asked me where," recalls John Ryser, a prize-winning seed potato farmer who lives south of Prince George. Ryser told him it wouldn't be easy, because the potato had been decertified for seed production in 1976. By the time LeBourdais came calling in 1983, the Cariboo spud had been banned for seven years and Ryser had given up growing the variety.

"I kept the Cariboo going for years," says Ryser. "The big cheeses de-listed it because it would hang on to the vines." Government officials may prohibit varieties for reasons ranging from disease susceptibility to a tendency to snarl farm equipment; industrial potato farmers want plants that harvest easily with machinery. "Once a variety is de-listed, if you grow it, they'll cancel your seed grower's licence."

But chance and luck launched a new chapter in the history of the Cariboo potato. During a spring meeting at the government experimental farm in Prince George in 1984, a visiting horticulturalist showed up with samples of all kinds of varieties, including Cariboo potatoes from the former Vancouver Research Station in Pemberton.

"Before it was all done, I got four or five of his six Cariboo potatoes and gave them to Jerry," says Ryser. "Then Jerry got in hot water because he was bragging about it, and they started calling it the 'Outlaw Potato.'"

The Cariboo region is known today for beef and alfalfa, but a richer farming history stretches back to the gold rush of the early 1860s. Settlers began farming to feed the miners, who otherwise had to pay a premium for whatever fresh foods could survive being mule-hauled up the Cariboo wagon road.

The Cariboo gained a reputation for quality potatoes, explains Denis Kirkham, a retired seed potato specialist who worked in B.C. for the federal Ministry of Agriculture for four decades. In the "heyday" years after World War Two, he says, there were 35 seed potato growers in a belt spanning from McCleese Lake, just north of Williams Lake, to Hixon, just south of Price George.

Yet the Cariboo potato itself has roots about as far from gold-rush country as you can get without leaving Canada. The variety was first bred at the federal Potato Research Centre in Fredericton, New Brunswick, which each year sent seed potatoes out to be tested at a network of experimental farms nationwide. In 1963, one such variety did unusually well in central British Columbia's tough climate. Mike Van Adrichem, then a horticulturalist with the Prince George experimental farm, gave it the Cariboo name. It became popular just as small-scale farming in the region began to face its most challenging times.

"There are lots of reasons potato production in that area declined starting in the '70s," says Kirkham. The Cariboo had a labour shortage, he explains, made worse for farmers by the fact that there was more money to be made in logging and the mills. Freight was costly, too, and made it difficult for the region's family farms to compete with emerging industrial producers in places like Washington and Alberta, and later, global suppliers such as China.

Many potato leek soups taste thin and weak. The key to this rustic recipe is to use a strong homemade broth and organic heritage potatoes (such as Cariboo potatoes) which have more and better flavour than their supermarket counterparts.

Dice one potato and add to broth. Bring to a boil, then simmer until potato can be mashed into broth. Meanwhile, melt butter in a fry pan at medium-low heat. Add sliced leeks, including leek greens, and a pinch of salt, then cover and fry until leeks are soft and golden (about 20 minutes). Add leeks to broth. Add the remaining potatoes, cut into cubes. Stir in remaining ingredients. Bring just to a boil at medium heat, then simmer until potatoes are tender to the fork. Serve immediately. Fried sauerkraut makes an excellent garnish.

"Small farmers couldn't compete -- but they certainly did in terms of quality for a bit. They had high disease freedom and quality and that gave them a premium for their extra work," says Kirkham.

John Ryser, who tracked down the Cariboo seed potatoes for Jerry LeBourdais, is one of the area's two remaining seed potato farmers. He remembers starting out in 1937 or '38, getting heck from his dad for not taking proper care of the potatoes on the family farm. At its largest, Ryser's seed potato operation spanned little more than a dozen acres -- tiny by industrial standards.

"Now I've got just a few acres, and have trouble selling what I've got," he says. "All south of Quesnel was growing at one time. Now it's all shipped in from Vancouver and Alberta. They're all buying them from Superstore and Overwaitea, which don't buy local."

It took a rebel to go up against the tide of history. Jerry LeBourdais, who died in 2004, came from a pioneer Cariboo family and was a lifelong social activist, leading a strike at the Burnaby refinery in his early years and later running several times for political office. Yet today, he might be most widely remembered as the Cariboo potato's greatest promoter.

"They grow really well for the northern region," says Jerry's daughter Lorraine LeBourdais. "They're a beautiful white potato, almost yellow, with pink eyes. They have smooth skin, and they grow tall -- you can pick them out in a patch because they're half a foot taller than other varieties. They pull out and then fall off the vine easily, which is exactly what you want for hand harvesting, but they're a nuisance for commercial harvesting -- they tangle in the harvester," says Lorraine. Cariboo potatoes are also known as excellent keepers, with a good size, shape and texture for baking.

Lorraine is a resident member of CEEDS (Community Enhancement and Economic Development Society), the commune that her father founded, in its original form, in 1971. Today, CEEDS operates three farms near Horse Lake, each on rented or leased land, as the commune does not support the notion of private property.

In 1982, while searching for Cariboo seed, Jerry LeBourdais wrote to the Ministry of Agriculture and was told, "the variety Cariboo can no longer be sold under any name and cannot be grown as seed." The letter continued: "I suggest that you select and grow varieties that can be legally grown in Canada."

CEEDS now grows about a half ton of Cariboo potatoes each year, walking a fine line along the official ban. In 1994, Harrowsmith magazine published an article on the Cariboo spud and CEEDS received letters from across the continent. Rather than sell the spud, they gave away free seed potatoes to everyone who wrote.

'Anything you can eat or smoke...'

The Cariboo isn't the only potato to have its own underground movement. Currently, momentum is building to save the Nooksak potato, another variety that has proved to be a regional standout in the Cariboo. To maintain a strong gene pool in their crops, seed potato growers must bring in new seed from another grower every seven years -- and John Ryser appears to be the last seed farmer growing the Nooksak. If so, this year's crop will be the last to be certified, and the Nooksak potato will live on only in the gardens of citizen seed-savers.

Backyard spud-saving is a Northwest tradition that goes back farther than almost anyone would expect. The Makah Nation of the Olympic Peninsula in Washington has been gardening the Ozette potato -- named for a Makah community -- since at least 1791, the date when it is believed the potato was brought from South America by Spanish explorers. The potato wasn't recognized outside the Makah community until the 1980s. Likewise, Haida Nation growers raise a fingerling variety, the Haida potato, which may have been acquired by trade or travel even before the Haida met their first Europeans. During the conflicted years that followed, gardeners alone saved the Haida potato from extinction. History is repeating itself with the Cariboo potato today.

"I'm not saying it's the greatest potato that ever lived, but it's got culture and associated history. It's very important and symbolic for what it represents more than anything -- biodiversity and independent local culture," says Bob Sarti, a retired reporter and longtime friend of Jerry LeBourdais. He notes that the legacy of the Cariboo potato is now inseparable from the commune that LeBourdais founded, and its philosophy.

"They're anti-capitalist. They never own land, and always had to move for this reason," says Sarti. "They've been doing continuous, uninterrupted agriculture, and are unique in the fact that very few can support themselves entirely this way.

"Jerry was a larger-than-life person," Sarti continues. "He had quite an impact in the Cariboo with the back-to-the-land movement. Jerry always said anything you can eat or smoke, you should be allowed to grow."