Halloween is getting scarier. It's starting to rival Christmas in toxicity without so much as a "boo." It's the costumes, mostly. And somehow, along with going less green, they've also become more boring. 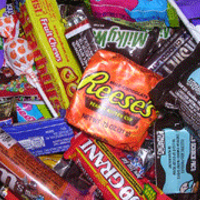 Look, I don't want environmentalism to spoil the party -- I'm hoping it can save it, in fact. Because it's hard to keep up enthusiasm for the big fright night once you've been to supply stores.

While people used to rummage around in their basements, thrift stores and fabric stores for costumes that were sometimes lame and sometimes surprisingly creative (and many people still do), if you go to local haunts like Vancouver's Dressew (cheap fabric) and Value Village (cheap used clothes), you'll see that most people are in fact lining up to buy tacky, pre-packaged, disposable costumes.

I complained about this to a friend who said maybe it's just time Halloween withered away. But Halloween is too important. And it's too ironic to let it be killed by conventionality, when historically and currently, it's about celebrating the antithesis of that.

Halloween is a night when you get to exercise your fantasies, fetishes and alter egos with encouragement instead of sanction. When shy people feel OK about letting their inner demons and divas out of the closet. Or when people who just love a good dress-up get to do so without having to find a boring theme party excuse (Hawaiian barbeque again anyone?). It's also the only holiday that really celebrates what is dark and devious about human nature. Without its counterbalance, would the sometimes sickly-sweet holidays like Valentine's Day even be possible?

I'm crappy when it comes to costumes and dress-up (embarrassed, pathetic, "don't have time"), so I asked a few friends who actually freak me out. One specializes in vegetables. Last year, he cut the roots off beetroots, stuck them to his face, then put fake blood on top. What was he? I don't know. And I hate to encourage it because, frankly, it grossed me out. But it was very cool and scared lots of children.

Another friend dresses up as a character every year -- like Hermione from Harry Potter -- using only what she can find in her basement and used clothing stores. She thinks about it for most of the year. And she decorates her house top to bottom for most of the month of October using the same stash of decorations with just a few yearly updates -- like what people do for Christmas.

A few other friends, who happen to love dressing up their kids, each buy or make a costume every few years, then swap them around in an unofficial costume library.

And a few adult friends always rent costumes –- and though it's got nothing on my friend's pregnant nun outfit, a gorilla outfit that gets used dozens of times is still greener than a plastic hulk mask that gets dumped after one use.

I heard of someone else who pulled cereal boxes out of his apartment's recycling bin, pinned them to his clothes, and stuck a knife into one of them that was oozing with fake blood. Yes, he was a "cereal" killer. That's way wittier than I could be. And is way more likely to kill his and others' inhibitions. Welcome to the whole freaking point of the holiday.

What about you? What are the best homemade Halloween costumes you’ve seen? Post them below!