The subject of shame came up the other day in conversation with a friend who recounted how in Grade 4, his entire elementary school class had picked on a pair of brothers who’d recently emigrated from Germany with their family.

“They were weird kids, they had accents. Also, they were German, and after World War Two the Germans weren’t looked upon very well. Everyone did it, so I did it too.”

One day, he bumped into the boys’ mother on the street. “I still remember the spit flying out her mouth,” he says, as she demanded to know why her kids were being picked on.

Every time my friend said the word “picked,” an image of chickens flashed across my mind’s eye.

Chickens ganging up to peck and attack other chickens isn’t uncommon. But such behaviour has largely been consigned to the barnyard — until now. In restaurants, on airplanes, in stores and the halls of power, bad behaviour and a lack of remorse about it are everywhere.

This degeneration is most apparent in the realm of politics, where bald-faced lies and bullying have long been common practice. But it’s the total, unabashed rejection of other people’s rights that feels like a new thing. Actually, “rejection” doesn’t quite do it justice. More like the violent and ongoing repudiation of even the most basic common courtesy and civility. Worse still is the lack of shame about it all.

What happens when people lack this internal speed limit? The thing that says, “Go stand in the corner for a while, face the wall, and think about what you’ve done.”

We’re witnessing it in real time, big and small, like chickens grown large, armed and storming the capitol.

The New York Times’ deep dive into the events of Jan. 6, recreated by forensically analysing cell phone footage taken by those in the heart of the scrum was yet another reminder, as if we needed more, about what happens when shame goes away and is replaced by anger and a strange species of righteous indignation.

Add in a little Trumpian incitement, a dollop of white supremacy, a bucketload of toxic masculinity, and heyo! You’ve got a mob. It was a veritable chicken coop from hell, right in the heart of American democracy. In poured the insurrectionists, high on the fizzy octane of riot and blood lust. Confederate flags held jauntily aloft, beaks hungry for pecking, feathers flying.

It’s unsettling and terrifying to witness people give over their rationality and descend into a fury.

In a recent interview about his book It Can Happen Here: White Power and the Rising Threat of Genocide in the U.S., author Alexander Laban Hinton describes the very real potential for catastrophic violence in America, given the rising number of angry groups.

There are the “white Christian fundamentalists, which we saw clearly during the January insurrection, agitated and mobilized,” he writes. “You also have the ‘Stop the Steal’ people very upset and feeling increasingly desperate. Then, we have QAnon, which went from barely existent at the time of Charlottesville to a movement of millions strong.”

An essay in the Atlantic came to a similarly chilling conclusion, that when people talk a big game about killing folk, sometimes they carry through with it.

“Since 2015, Republican leaders like [Mitch] McConnell have plainly been hoping that Trump’s movement and its violent rhetoric would somehow just go away,” writes Hussein Ibish. “They ignored, and thereby effectively condoned, it. But it didn’t go away. Instead, it ripened into actual violence on Jan. 6 and seems ready to burst out again in a far more savage manner during some future confrontation.”

Anyone who watched the New York Times video probably came to similar conclusions: the point was to do some serious hurt and that appetite hasn’t yet been slaked. The thirst is still out there and spreading, popping up in Floridian estates and school board meetings.

Canadians are not immune, as recent clashes between anti- and pro-vaccination folks in Alberta have demonstrated. A full-on descent into madness doesn’t seem entirely unlikely.

This widespread rage has prompted a number of essays and articles about what is making everyone so angry.

Chickens offer some lessons. Pecking often ensues over a lack of resources. Victims are chosen and then sacrificed. Jared Diamond came to similar conclusions about mass atrocities in his book Guns, Germs and Steel.

All of this has brought home some deep-seated questions about what it means to be human. Most people who’ve inflicted harm, on purpose or accidentally, feel a deep remorse about it. Even 40 odd years later, I still remember the face of a girl who got bullied in elementary school, and her expression of animal suffering as she clambered off to the school bus to a chorus of jeers and insults. I don’t remember why we all decided to pick on her, other than she was awkward and smelled weird, but I still feel badly about it.

So too, my friend and the weird German kids. The feelings of remorse are still vivid, the sense of profound shame still reverberating decades later. Of the experience, he says, “I never picked on them again. In fact, I became friends with them.”

I wonder if the American insurrectionists who trooped home after storming the U.S. Capitol ever wake up in the middle of the night with a sick feeling coursing through their chests, thinking, “What did we do?” Or can you only give yourself licence to behave in a certain way if you banish all shades of doubt and go full cult mind? What degree of compartmentalizing or cognitive dissonance is required to be an evangelical Christian or a member of the GOP?

Anger and aggrievement are understandable to a certain degree — we are only mammals after all — but the congealing of angry feelings into something that resembles poured concrete, that is much more frightening. As many intelligent people have noted, hatred was always the point. But once folks have tasted this bitter fruit — not only tasted it but eaten bushels of it, sucked it down like mother’s milk and felt the heat bloom in their throat — is there any hope that some cooler emotions might prevail? 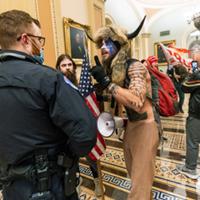 The Capitol Insurrection Had Me Back on My Grade School Battlefield

If people abandon the fundamental lesson of do unto others, does this free them to commit atrocities? The answer might be a very clear yes, but it’s not an immediate path, more a slow build. It might start by watching too much Fox TV, but it ends in full-scale fascist insurrection.

When foundational human stuff like remorse for causing pain to other people gets turned off when the mob mentality descends, how do we get it back? The question keeps me up at night. There aren’t any immediate or obvious answers.

And still the chickens are crooning low in a corner of the pen, building up resentments and anger, sharping their talons, clucking angrily about immigrant chickens and the Big Chicken Government imposing its will on the flock. It’s always some other chicken’s fault, whether they’re chickens from a different party or simply chickens of another colour.

Shame used to be a very effective teacher, staying with a person with a nuclear half-life akin to uranium. Of all the lessons people were supposed to learn in kindergarten, it was one of the most enduring and hardest to escape. It is fundamental to learning harder lessons, not just the immediate sting of insult or failure but the deeper feelings that uncoil at 3 a.m. and demand to be acknowledged.

Without it, we fail to learn what we really need to learn, which is how to be fully human, empathetic for other people’s suffering, knowing that it’s not any different from our own.