When Cornelia Hahn Oberlander passed away on May 22, we lost an inspirational, trailblazing landscape architect, a fierce environmental advocate and a friend to many. With her big personality and enthusiasm for a greener future, she made visible the practice of landscape architecture, a profession that is often invisible.

COVID-19 has shed light on the value of gardens, parks, plazas, green rooftops, play areas and streetscapes — the types of spaces Oberlander has been creating in Vancouver since the 1950s. Of course, she always understood the value of these spaces, and she left us with invaluable gifts throughout the city.

For seven years I studied Oberlander and her work, writing Cornelia Hahn Oberlander: Making the Modern Landscape. It was an incredible experience to get to know her. I also got the inside scoop on some of her most famous Vancouver projects. She always said landscape architecture was the art of the possible. I learned from her that it was surely her powerful determination to make things possible that led to her most poignant work.

Underneath her smile and sunny disposition was a force of nature. Arthur Erickson once remarked, “No one could strike the fear of God into a contractor like Cornelia.”

Since Oberlander’s passing, several people have told me they never knew about her involvement with the logs on Vancouver’s beaches. In 1963, Oberlander noticed giant plumes of smoke rising from Jericho Beach. Upon closer inspection she found that park workers were burning logs that had broken away from a log boom. While this burning was common practice, she thought it was polluting and a terrible waste.

She called Vancouver Park Board superintendent Bill Livingstone and advised that the logs be saved and spread out on the beaches for people to sit on. Livingstone thought this made sense and followed her advice. For over half a century people have enjoyed relaxing and socializing on these logs. But this is only one of many gifts that Oberlander has left Vancouver. Here are five more.

1. The rock on Cambie Street

Have you ever noticed the large rock outcrop in front of a house on Cambie Street near Queen Elizabeth Park? When Oberlander moved here with her husband, Peter, in the 1950s, the city was rapidly expanding its housing stock. Many of Oberlander’s first projects in Vancouver involved the design of gardens for apartments and single-family homes.

A 1954 encounter with a housing site on Cambie Street presented an interesting challenge. At the time every other lot on the block had been developed, and only this one lay vacant. The main impediment to construction was a huge rock outcrop, created by volcanic activity that resulted in nearby Little Mountain (now Queen Elizabeth Park) millions of years ago.

Since this geologic fragment intruded into the sidewalk, the city required that any development of the site require blasting the rock. The owners of the property were originally from China where rocks are cherished, and the family loved it. They asked Oberlander to save it as they planned their new house with architect Harry Lee. Oberlander argued the city should lift its requirement. Saving the rock and situating the house behind it would reduce traffic noise from Cambie Street, she noted, and also create a visual barrier. Keeping the rock would avoid added costs, environmental damage and loud disruptions to the neighbours.

Oberlander prevailed; the rock was saved, and she began design work on the new garden.

Today this part of Cambie Street has been completely redeveloped. Multi-story residential structures have been built on either side of the property, but the modest house and the rock remain, framed by these buildings.

Have you ever walked down Hornby Street on the two blocks between Robson and Nelson streets, beside the law courts and Robson Square? You might have felt a little calmer looking at the beautifully planted wall of the court building, and the street trees that create a green, tunnel-like space. If it was warm out, you may have felt protected from the sun and a bit cooler too, enjoying the dappled light created by the trees.

The landscape at Robson Square is Oberlander’s most famous Vancouver project. She began working on it with Arthur Erickson and his team in 1974, and many people have admired the unique stramps — stairs with incorporated ramps — dramatic water features, the towering earthen mound at the corner of Robson and Hornby streets, and the thousands of plants, many growing on the structure below.

Oberlander was responsible for the planting design for over 50,000 shrubs and trees, and her street trees along Hornby were a special gift. At the time, street trees in the city were to be planted approximately 10 metres apart, a spacing often practised today. However, Oberlander felt the trees should be spaced about five metres apart. She wanted to make the street experience feel like part of the landscape she was creating for Robson Square and the law courts. Again, she argued with the city and won. Combined with the planted facade, these tightly-spaced street trees have created one of the best streetscapes in downtown Vancouver.

If you have ever visited the Museum of Anthropology at UBC, you may have noticed the series of large, planted earthen mounds in front of the museum. You might have walked through them to reach Oberlander’s beloved Yosef Wosk Reflecting Pool.

Oberlander began her work with Arthur Erickson on MOA shortly after starting the Robson Square project. She researched native grasses and other plants in the area, and she used some of the massive amount of soil excavated to build the Robson Square site to create the MOA mounds. Given the museum’s proximity to a busy street, the large mounds blocked roadway noise, and Oberlander’s use of unmown native grasses announce the uniqueness of the project when compared to the other highly manicured landscapes at the university.

Just a few blocks away from MOA is the C.K. Choi Building. If you ever pass by it in early spring, you’ll notice the brilliant yellow blooms of iris flowers amongst the sedges and reeds between the building and sidewalk, which is lined with a row of gingko trees. The beautiful planting is not simply a floral display. It was an ecological solution that involved NASA.

In 1992, Oberlander, Matsuzaki Wright Architects and Keen Engineering were selected to design the C.K. Choi Building as a model for sustainable design and building practices. Working with architect Eva Matsuzaki and mechanical engineer Jeanette Frost, Oberlander helped realize a building that had no connection to the university’s stormwater or sanitary sewers. Water was recycled in interconnected systems throughout the building. One of her chief tasks was finding plants that could filter the water used in the building as well as rainwater from the roof.

The water filtration plants were planted in the trenches between the building and the sidewalk. While landscape architects frequently create these “bio-swales” today, this was new territory in the 1990s. It led Oberlander to consult with Bill Wolverton, a scientist with NASA’s John C. Stennis Space Center in Mississippi. Based on his advice, she selected irises, sedges and reeds to filter the water. The signature gingko trees played an ecological role too. Highly valued in traditional Chinese medicine, gingko trees are excellent absorbers of air pollutants. 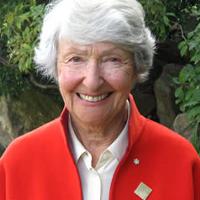 If you’ve ever passed the VanDusen Botanical Garden visitor centre on Oak Street, you’ve likely noticed its undulating planted roof. Since Robson Square, Oberlander had been involved in many green roof projects, but this roof was the most dramatic. She consulted with Sharp and Diamond Landscape Architecture and architectural group Busby Perkins Will to help create a visitor’s centre that demonstrated how plants support our livelihood. For the architects, there was no better way to express this idea than a building whose very structure recalled plant life.

Inspired by Oberlander’s research on the white bog orchid, the architects translated the petals of the orchid into a roof structure, a virtual building-sized corolla with a single petal raised above the others to signal the building’s entrance. At the back of the centre one of the giant petals almost touches the ground, and transports water to a rainwater garden. Of course, Oberlander planted the top of this roof’s rolling lanceolate-shaped topography.

This is only a small sample of the gifts that Oberlander left for Vancouver. As she liked to remind people, landscapes take time, and we will be appreciating these gift for years to come. Next time you lean up against a log on the beach or enjoy the shady respite offered by a tree, think of Cornelia Hahn Oberlander. She was surely thinking of you.