Growing up in the Cree community of Maskwacis, Alberta, Jesi Whitton was always in the kitchen, watching her aunts and kookums make food for feasts and big family dinners.

“Watching my older cousins bring home meat, watching them cut up all the game meat from scratch and seeing the process of it always intrigued me,” said Whitton.

After working in restaurants in Edmonton and Vancouver and starting her own catering company, Whitton became the head chef at Friendship Catering Services last September.

The Vancouver Aboriginal Friendship Centre has been closed since the pandemic started, and Whitton was searching for a way to bring the community together in a safe way to give people a taste of home.

“A lot of people look forward to coming to the Friendship Centre,” Whitton said. “The doors are closed, so how can we bring back that sense of community?”

Prior to the pandemic, Whitton said, people gathered at the Friendship Centre to connect with their culture and to celebrate everything from Christmas to Hoobiyee, the Nisga’a New Year.

When Whitton posted about the takeout service on Facebook, the response was immediate: a long lineup down East Hastings Street on March 23, the first Friday her team tried out the idea.

Friendship Centre Catering ran the service again on April 16 and quickly sold out. With such a strong community response, Whitton said that she’ll continue to offer it.

“This was our culture, our community, so it’s good to come here to just connect,” said Corinne Stone, a social worker with the Vancouver Aboriginal Child and Family Services Society who was at the Friendship Centre to order Indian nachos to bring back to her workplace on April 16.

Stone, who is Tsilqot’in and Shuswap, said foods that remind her of home include sockeye salmon, deer meat and moose meat.

“We smoke it, we shave it and season it,” she said. “A lot of my family, they have smokers in their backyard.”

At the Friendship Centre, Whitton said, many Indigenous people are looking for the buffalo burgers, salmon and seafood that remind them of home.

“Fry bread is a must,” she added. “A lot of people didn’t get a chance to learn how to make it, so when they can acquire it somehow, they love it.” 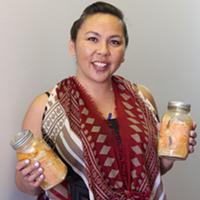 At ‘BigHeart Bannock,’ Resilience and Resistance in Food Made Well

A fisherman recently dropped off 70 pounds of clams, for instance, which Whitton turned into a Louisiana-style gumbo soup.

Whitton previously worked in restaurants like the now-closed Bin 100 Tapas Parlour in Coquitlam, where she learned how to cook food from many different cultures.

“Any time I worked in a kitchen that had a certain ethnic cuisine, I would become enthralled in it and would learn all the flavour profiles (associated) with that one culture,” Whitton said.

“I do a lot of different fusion with different things,” she said. “In Canada, you can do that, there are so many people here, it’s like a melting pot. And then to incorporate the Indigenous aspect, it’s just phenomenal.”

But cooking for the Friendship Centre has given her renewed purpose.

“Here it’s a sober environment, it’s culturally based, and I feel like I’m making a difference in other people’s lives,” she said.