Goodbye, Soho! COVID took you away too soon.

I never thought my favourite Vancouver restaurant would close. Not after all the busy nights I lined up with my friends on Cambie Street, alongside hungry families, church groups, school clubs and sports teams, waiting to get in. Our parties of 10, 20 and sometimes 30 people were Tetris-ed into the seats by skillful managers, and we’d sip fruity teas and scarf midnight spaghettis until closing time at 2 a.m.

Alas, with the pandemic, it was not at a table but in the car that I ate my last supper from the Soho kitchen, shovelling rice into my mouth with a plastic spoon from a foil pan.

It’s been a rough year for restaurants. Among the losses in Vancouver, Campagnolo and Au Petit Café vanished from Main Street, and Federico’s and the Storm Crow Tavern vanished from Commercial Drive. The banquet industry was hit particularly hard without any celebrations to host.

As a customer, I’ve felt rather powerless to help my favourite dining places. I don’t eat out or order in as much as I used to. When I do, I double or triple my tips, and I try to avoid ordering on parasitic apps. But even then I wonder what a few dollars can do to offset the losses. According to Restaurants Canada, eight out of 10 restaurants are losing money or barely scraping by.

Other than hugging loved ones, it’s sharing a table with them that I miss the most. Now I’m worried how many of the tables that once hosted us will be there when the pandemic ends.

Sadly, my beloved Soho won’t be. I’ve always thought of it as a very Vancouver restaurant, one that could only exist in our Canadian city. Here’s why.

The main section of its menu is dedicated to dishes from cha chaan tengs, a kind of restaurant in Hong Kong born at a time when the former British colony saw cuisines from distant shores wandering into local kitchens.

Why do cha chaan tengs serve borscht? It’s thanks to White Russians who fled the revolution. Why is there chicken in turmeric sauce? It’s thanks to the Portuguese in nearby Macau. Why is the tea made with cans of evaporated milk? It’s thanks to British troops ordered not to go for the fresh stuff due to fear of tuberculosis.

At the cha chaan teng, the imperial frictions of the 20th century come together on a mosaic of a menu. The dishes tell stories of migration: the egg sandwiches, the seafood rice gratin, the Florentine sole with spinach and, one of my favourites, the French toast, deep-fried Hong Kong-style.

At Soho, the French toast was five dollars, with a complementary drink at teatime, and the chefs made them spectacularly. I spent many afternoons in a Soho booth, swooning with a sugary fever, biting through the crispy golden top, soaked with butter and syrup, to the fluffy centre, filled with kaya, a coconut custard. I’ve seen friends in sweat-soaked jerseys tuck into them as a post-game pick-me-up, even ordering them à la mode.

Admittedly, these combos are a bit Frankenstein to the uninitiated. Even Anthony Bourdain — the beloved late chef, writer and culinary documentarian who’s dined on everything from shark to cobra — didn’t know what to make of the cha chaan teng. When visiting such a spot in his Layover show, his reaction was: “Wah?!”

Such dishes are a cornerstone of Hong Kong comfort food, though I don’t blame Bourdain for being bewildered, as they’re different from the city’s more obvious offerings like barbecue and dim sum.

The cha chaan teng has its origins in a time when western food was a luxurious thing, served in hotels and fancy dining rooms for expats and out of reach for working-class Chinese. In 1860, a restaurant called Chui Lo Ko in Canton is credited for being the first to try recreating western dishes for Chinese palettes — steak marinated in soy sauce, for example — and at cheaper prices.

This fusion, sometimes called “soy sauce western,” took off in Hong Kong post-war. The evolution didn’t stop there, as restaurants added Singaporean, Malaysian and Thai flavours to their menus. It was a world of food made affordable.

Even as someone growing up in Vancouver decades later, I could relate. My family often ate at cha chaan tengs, which were cheaper by half or more than western restaurants. When we did dine at places like Earls for a special occasion, we’d skip the drinks and share dishes to keep the bill down. Over the years, I’ve watched waiters give our Chinese family shaming stares as they confiscated our wine glasses and ignored us in favour of chatting up tables that ordered more.

Those cold experiences make me nervous about western dining to this day. So it’s a good thing for me and my wallet that Metro Vancouver, a region of some 72,000 Hong Kong immigrants, has about three dozen cha chaan tengs, ranging from cushy dining rooms down to humble stalls in neon-lit food courts. Twenty dollars can get you a three-course meal with surf and turf. The names of the restaurants nod to locations in the former colony, from Kowloon Bay to Café Gloucester to Kingspark Steak House.

I loved Soho because it took the concept of a cha chaan teng even further. Harmony Cheung, the manager who’s served me countless times, told me that Soho’s massive menu is thanks to her father Eddie, whose first job after immigrating to Canada in the 1970s was with BC Ferries, washing dishes and helping with the kitchen pantry.

His uncle nudged him to continue in the food industry. Eddie recalled his advice: “Everyone has to eat.” After taking classes at Vancouver Community College, he honed his craft at establishments like the Bayshore Inn and Four Seasons Hotel. From there, he became a meat supplier and restauranteur, opening a number across the city with various partners and with his wife Eva. They ranged from western cuisine, like Sonoma Café on Fourth Avenue, to more eastern, like Flo in Marpole, where Harmony started helping out in her mid-20s.

“Growing up, we didn’t get to see our parents very much,” said Harmony. Their restaurants meant long and late hours. She knew it was tough work, but she too caught onto the joy of experimenting with food and feeding customers.

In 2012, the family opened Soho. Harmony, a graphic designer by trade, designed the signage down to the cups. And, in the spirit of ever-evolving cha chaan tengs, Chef Eddie expanded the menu beyond Hong Kong offerings.

“The good is that there’s a lot to offer customers, but the bad is that we have to stock everything,” said Harmony. “My dad likes to add a lot to the menu, but he doesn’t like to take stuff out!”

Soho served the food of Taiwanese migrants too, dishing out their classics like hot pot and fried chicken with basil and white pepper.

“I’m not a chef at all! But I like creating things,” said Harmony, whose contribution was another treat you could find in Taiwan: toast boxes, a jewelry box of a dessert. You could have your bread cube dressed with honey and fresh fruit, or black forest-style with chocolate ice cream and cherry filling.

Chef Eddie also showed off the culmination of his hotel years at Soho, bringing out lobster bisque, salmon wellington and, for Thanksgiving, turkey with chestnuts and sticky rice — truly Chinese Canadian. Eddie offered to debone them too.

With all these influences, Soho was, quite literally, an only-in-Vancouver melting pot. By the time it closed, a typical meal and drink came to around $12, and people of all ages packed the booths.

It took an artful athleticism to cook in a kitchen like Soho’s, particularly for the dishes that require a wok. Harmony tells me that many of the chefs doing this workout are over 50.

“Your left hand is holding the wok, but it’s heavy and you got to move it up and down. Your right hand is working the ingredients. Your knee is controlling the intensity of the flame. So it’s very tiring for the chef, not to mention being really hot. People expect quick turnarounds, so it’s high pressure in a hot environment with not that much room to move. And in the summer, the heat is excruciating!”

When the pandemic hit, meeting the restaurant’s overhead costs amidst changing public health closures and reopenings was simply too difficult. Harmony and the rest of her family, with their dad’s health in mind, gently suggested retirement.

“He’s a bit of a workaholic, a never-wants-to-retire type of guy,” said Harmony. “But we, the whole family, encouraged him. He’s never really been ready until more recently. It’s bittersweet, but I’m happy that he’s finally ready to let go of Soho, even though we’ll miss it so much.” 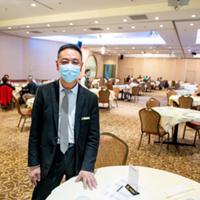 Last Wednesday, Harmony announced that Soho would be closing in five days. The restaurant was bombarded with calls and lineups of loyalists wanting a final bite of pasta or sticky rice and lobster, which Eddie would pick up fresh from Chinatown in the mornings. The buckets of Bolognese prepped by the chefs were emptied.

My last supper? A grilled pork chop over a bed of fried rice, covered with cheese and tomato sauce and baked. I washed it down with a milk tea, a toast to the Brits.

It’s a unique kind of pain, crying over pork chops served to me by special people in a place that’s no more. I’m going to miss the hospitality.

The age of mass media and the celebrity chef have led us to think of fusion as bravery that only a wild genius would attempt. But cha chaan tengs prove that fusion is something more universal — quite simply, more good food on the table for more guests. In each of their kitchens is a Prometheus like Chef Eddie, dishing out the world from a wok.

Goodbye Soho! Without you, I’ll be ever hungry.