Haiti, the poorest country in the western hemisphere, usually attracts our attention only when it’s hit by yet another disaster: an earthquake or a cholera outbreak. We ignore it as too dangerous for tourism and lacking in strategic value to the United States.

But if we were honest, we’d admit we also ignore it because for 200 years Haiti has posed a threat to all countries whose wealth is founded on Black slavery and oppression. And just as the American and French revolutions were raising the banner of “liberty,” a Black Haitian called their bluff by asserting that Africans also qualified for liberty, equality and fraternity.

Toussaint Louverture is the Black rebel leader who forced the abolition of slavery in Haiti and paved the way to independence for the island nation. A new biography about him makes fascinating, important reading today, as the Black Lives Matter movement and pressure for reparations to descendants of enslaved people build steam.

Author Sudhir Hazareesingh reminds us that Toussaint remains a formidable person for Latin American rebels and Black scholars everywhere. Hazareesingh notes that Fidel Castro, planning his ill-fated attack on the Moncada Barracks in 1953, was inspired by Toussaint. Castro’s long rule looks like what Toussaint might have achieved: social equality at the cost of considerable personal liberty.

Toussaint also inspired the philosophers of negritude like Frantz Fanon. And Toussaint’s followers, having been termed Black Jacobins for their heightened French revolutionary ideals, are the actual inspiration for the American socialist journal Jacobin.

When Toussaint Louverture was born around 1740, Haiti — then known as Saint-Domingue — was the richest colony in the Caribbean, the jewel in France’s imperial crown. It was a major exporter of sugar, coffee and the dyestuff indigo, all thanks to the labour of half a million African enslaved people. Working conditions were so lethal that the demand for new enslaved people was constant, and African-born enslaved people (bossales) formed about 60 per cent of the adult population of colony by 1790.

It was a complex society: French-born whites, locally-born Black and white creoles, free Blacks, runaway enslaved people known as marrons, and ethnic divisions among enslaved people. Toussaint, for example, was born an enslaved creole person on a plantation; his father had been a royal functionary in the kingdom of the Allada people of Benin, but most enslaved people were of the Kongo or Angolan peoples.

For all their differences, the enslaved people were ruled by the Code Noir, a set of draconian rules that amounted to state terror against its workforce. Toussaint as a boy flirted with death on a couple of occasions when he fought a white boy or dared a white to hit him. Even his devout Catholicism was a kind of drawback: the Jesuits who taught him annoyed the authorities by supporting ideas like marriage between enslaved people.

But after a sickly childhood, Toussaint became an athletic young man and a brilliant horseman; as an adult he was considered the best in the colony, routinely outrunning his escorts in his travels across Saint-Domingue. In his 30s he was freed, but remained on the plantation; his wife and children were still enslaved, and he held an influential position as coachman to the attorney who ran the plantation.

Toussaint was tied in to the intelligence network that carried news to enslaved people across the colony. They were very aware of the social unrest in France in the 1780s that led to the revolution. Their masters debated revolutionary ideas over dinner, ignoring the enslaved people who served them the next course. Toussaint himself was reading important Enlightenment books and pamphlets. But he drew a conclusion even the revolution shrank from: not only were men equal, but Blacks were equal to whites.

When an enslaved revolt broke out in August 1791, Toussaint must have been aware of it; Hazareesingh argues that Toussaint, a master of deception, was among the ringleaders, but kept his role secret. In the ensuing chaos, however, he emerged as a major figure.

The Vietnamese lawyer Võ Nguyên Giáp became a general who could beat the French and the Americans in the 20th century; Toussaint Louverture was a coachman who became not only a brilliant general but an 18th-century nation builder. He built a small, ragged army as disciplined as any in Prussia, mocking the French belief that “savage” Africans could not stand against white troops. His soldiers moved with impossible speed, defeating superior forces. In 1794 France abolished slavery in the colony, but the battle was far from over.

The revolt had immediately brought Spain and Britain into the colony to try to seize French resources. Toussaint fought for Spain for a year, then made deals with the British. But his ultimate goal was both radical and conservative: a Saint-Domingue in which Blacks, whites and people of colour were free and equal — and French. He wanted autonomy, but not independence.

By the end of the 1790s, Toussaint was the master of the whole island of Hispaniola; having gained control of Saint-Domingue, he invaded the Spanish part of the island to implement a treaty ceding it to France, and promptly freed its enslaved people too. The French were both alarmed and awestruck, but too preoccupied with the rise of Napoleon Bonaparte to act against him.

Meanwhile, Toussaint was creating the archetype of a Latin American liberator/dictator. His senior officers were often his own relatives, and he was a micromanager whose approval was needed for the most trivial matters. He promoted the Catholic Church, but drew on vodou and its supporters as well. He protected the whites and people of colour, staffing both his army and the government with both.

Most of the surviving white landowners thought he was a gift from God. Not only had he saved them from slaughter, but he insisted that free Black labourers remain on their plantations and work hard to restore the shattered economy. While his achievements drew praise in the U.S. and Europe, they also caused intense alarm: the Europeans and Americans alike regarded slave revolts with horror. Not only was the vast wealth of the Caribbean at stake, but the prospect of Black people in power seemed like a ghastly perversion of the natural order.

Toussaint played the slave powers off against one another, now supporting Spain against Britain, then welcoming American merchants, then making a deal with Britain by promising not to export his revolution to Jamaica or other British colonies. While he remained loyal to France, French commissioners sent out from France to govern the colony found they served at his pleasure.

In the early years of the 19th century, events came to a head: Toussaint produced a new constitution for Saint-Domingue which Napoleon regarded as a declaration of independence. Actually it was an inspired attempt to reframe Saint-Domingue as an autonomous part of France, but Napoleon’s response was to send a task force of 20,000 men to retake the island.

Toussaint was disappointed but prepared. Though vastly outnumbered, he and his army of 6,000 waged an effective guerrilla war and counted on endemic yellow fever to further weaken the French troops. Napoleon won through guile what he couldn’t win by force: invited to a ceasefire discussion, Toussaint arrived without even a bodyguard, and was summarily arrested and carried to France. He spent his last months in solitary confinement in a castle, where his health deteriorated and he died in 1802. In his exile on St. Helena, Napoleon said his capture of Toussaint had been a disastrous mistake; he would have been wiser to have made him viceroy and kept the colony in the empire.

With the removal of Toussaint, his generals took over the campaign, especially the violent Jean-Jacques Dessalines, who defeated the French, declared independence and himself emperor, and ordered the massacre of the remaining white settlers; he also created a national flag, the French tricolour with the white removed. Dessalines was predictably assassinated in 1804. The nation he had named Ayiti was set on the turbulent course it has taken ever since.

If Toussaint Louverture had led the country to autonomy or independence, it would still have been treated as a dangerous pariah by the slaveholding empires around it. It could have been an example of a successful multiracial, multicultural state; that’s precisely why it was a pariah. 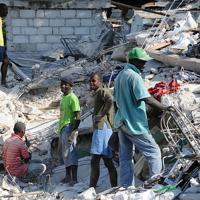 The Haiti that Canada Decided to Freeze

Haiti continues to be a pariah, studiously ignored by North Americans and Europeans when not exploited by them. But Toussaint was a hero to countless Black people throughout the 19th century. “Toussaint” was a popular name for Black boys; Elias Toussaint Jones was one of B.C.’s pioneering Black miners in the gold-rush era.

In 1893 Frederick Douglass, the Black abolitionist and author, gave a memorable speech in which he explained U.S. hostility to Haiti: “Haiti is Black, and we have not yet forgiven Haiti for being Black or forgiven the Almighty for making her Black.”

As white North Americans reluctantly contemplate the origins of their wealth and power in Black slavery, and Black North Americans and people of colour contemplate their future, Toussaint Louverture offers us all a vision of what could have been achieved in a slave state. It would be so much easier in states at least groping toward freedom and equality.