[Editor’s note: It’s the season of wildfires in our province, and so we are grateful to publish this timely excerpt from Claudia Cornwall’s forthcoming book 'British Columbia in Flames.' The book documents, with interviews and photographs, one of B.C.’s worst wildfires on record, which occurred in 2017. Look for it next month, published by Harbour.]

On Sept. 12, Gus Horn, a rancher who lives close to 100 Mile House, posted a video of what he saw when he flew over a number of nearby lakes with a couple of friends. Sheridan Lake, Watch Lake, Green Lake, Thomas Lake, Jack Frost Lake and Pressy Lake all unfolded below him. There was no voice-over, just the steady thrum of the engine. I found it heartbreaking to see the scorched land, the black lifeless stumps. Great swaths where there wasn’t even a blade of grass, just the naked scarred earth burned to a light grey colour. Without its normal green cloak, you could see every crevice and hummock. The land’s contours were all exposed. I felt its vulnerability.

I met Gus on his own place, which was untouched by fire. A busy man of broad interests, he was also the proprietor of Critical Mass Pop-Up Gallery, a venue in 100 Mile House for shows of photography, paintings, musical performances and films. We had a hard time arranging when to meet; Gus didn’t want to take time away from work to talk to me and suggested that I interview him while he was doing something else. His first idea was that I should accompany him on a trip to take some of his cattle to an abattoir. The timing didn’t work out, so in the end our discussion took place during what was for me at least a more conventional errand, while he drove into town to gas up and do some other errands. We rattled along in his truck with his faithful dog, Torch, sitting quietly behind us. Only after his chores were done did Gus allow himself to sit down in his living room. I also met Gus’s mom, Helen, a spry 93-year-old. (Actually, “spry” hardly does her justice. For her 93rd birthday, she went whitewater rafting on the Fraser River for nine days, from Soda Creek to Yale, and pronounced it “the trip of a lifetime.”) While we sipped the homemade smoothies Helen served us, I noticed that multi-tasking seemed ingrained in the Horn way of life. Their furniture was like that too: a dog cage doubled as a coffee table. 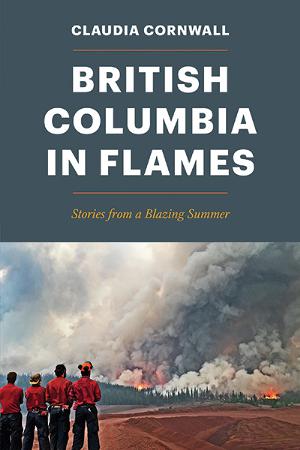 Gus’s grandparents homesteaded near Roe Lake around 1912. In 1947, his father bought the ranch just east of 100 Mile that Gus now runs. It turned out that we shared a connection. Gus’s great uncle was Carl Nath, who settled on the north side of Sheridan Lake and was helpful to [my husband] Gordon’s mom when she and our friend Jane bought property on the south side. Carl was the pioneer who walked from Ashcroft to Sheridan, using the same route that the Elephant Hill fire later followed. He and another early settler, whom I know as Old Man McNulty, built our boathouse. In our cabin, we have a photograph of Carl and his wife, Sarah — the black-and-white picture hand-tinted in soft pastels.

In September, Gus went riding with a friend, Ron Eden, to help drive the cattle Ron had in the fire zone south of Sheridan Lake. (Ron and Gus go back a long way: Ron’s father was the best man when Gus’s father got married.) About a dozen of Ron’s cattle had burned to death, but as he and Gus rode through the countryside, still pocked by fire and smoke, they discovered that most of Ron’s animals had managed to save themselves. “Cattle at that time of year, especially yearlings, are in little batches,” Gus said. “You’ve got three head or five head or six head together. Occasionally there’s one by itself. You know where the water holes are and they find water regularly. They move around all the time, but it’s not that they’re trying to escape from you.” Ron and Gus set up temporary corrals behind the lines, brought the cattle they found to the nearest set, and then transported them out with a truck. Gus also took videos and pictures while driving cattle through the smouldering rangeland.

“The fire was moving slow enough while I experienced it. If it was burning hot in the bush, if it was candling, usually that was in the evening, when things warmed up during the day. You might be riding or driving on a road, you’re a hundred yards away or maybe even closer than that. There were lots of clear-cuts, lots of open areas. It will burn across those areas. You get used to riding with flames.” Gus and Ron kept an eye out for trees at risk. “Certainly, we took it upon ourselves to cut lots of trees off the road. But if there is a tree fallen on the road and you’re cutting one off, there’s a chance that another one might come down. You don’t want to be there when it’s windy, no doubt about that.” And they were always conscious that the full-throated blaze was not far away. Gus recounted, “At one point, a conservation officer said, ‘Turn off your vehicle.’ So I did. He said, ‘Hear that?’ We were close enough, you could hear the fire. It was a roar. It was really heavy. You’re aware and you’re not going to hang around there.”

Gus spent two weeks in The Zone. “It was horrible. You have to be careful, it’s dangerous,” he said, “but after coming out, everything seems so banal. After such a big crisis, it’s hard to get used to the day-to-day. I had a buddy who was in Vietnam, who went back for a second tour. I couldn’t see why, but now I have a glimmer of understanding.” Gus had hit upon something I had not thought about much — that sense of excitement you got when being in The Zone, just being away from the “day-to-day.” Jeremy Vogt, the pastor of the Cariboo Bethel Church in Williams Lake, had mentioned something similar. “You know, Claudia, some of it was just fun. I mean the empty city. The mill was shut down. I was the only one in my house. I was the only one on my block and it was just dead quiet. One of my friends had parked their big motorcycle in my garage so I took it out for a drive. Big empty streets, you know? All the RCMP were out of town.” He chuckled at the memory and I smiled too. I had this image of a pastor on a Harley gleefully roaring through Williams Lake, robes flying, and no one around to check him.

This excerpt was taken from 'British Columbia in Flames' by Claudia Cornwall, with permission from Harbour Publishing.

*Story updated on Aug. 31 at 12:15 p.m. to correct that this story’s main photo was taken by Kevin Haggkvist, not Gordon Cornwall.