When one thinks of good manners, images of place settings might appear — knives and salad forks placed just so. Or maybe the holding of doors, doffing one’s trilby to passing ladies. Most people know the basics, please and thank you and can you pass the salt, but etiquette can seem kind of fusty and old-fashioned.

Until now, that is.

We’ve entered a new age of thoroughly modern manners, courtesy of COVID-19. Some issues aren’t huge departures from previous ways, but others are decidedly different and take some getting used to.

With this rapid shift in social customs comes a degree of confusion and uncertainty. That’s normal. Things aren’t codified yet, and the landscape is still fluid. Sometimes you don’t realize how much things have changed until you are mid-gaffe.

For example. If you run into an acquaintance and you’re wearing a mask and they’re not, should you remove your mask in order to talk? If you leave it on, are you virtue signalling?

In an elevator, how many people at a time? One, two? Is talking allowed? What should you use to press the button: elbow, knee or the tip of some other body part?

If you want to communicate wordlessly with another masked-up swaddled person, is it sufficient to beam your good intentions through your eyeballs? Should you follow up with a jaunty salute that indicates, “I see and honour your commitment to public health and safety?”

Sometimes it’s the smaller, stranger moments that are the most confounding. Here’s where manners come in, to direct and smooth things over so that society can flow more easily.

Please, don’t stand so close to me

Masks are the issue that folks seem most divided on, but it’s actually social distancing that contravenes the foundation of sapiens behaviour, namely sociability. To be told that we can’t touch or be close to other people can bring on primal feelings of despair and dislocation.

COVID-19 has done away with things like handshakes, hugs and smiling broadly in someone’s face to connote, “I am no threat. I will not attack.” People are forced to make do with things like elbow bumps, air hugs and smizing above their masks, which means essentially crinkling your eyes until they resemble crumpled up chip bags.

Some of these things work better than others. Worse, some will probably be with us for a long time.

If handshakes arose as a way to demonstrate to strangers that you had nothing in your mitts that could hurt another human — no knives, machetes or broadswords — now they are just the opposite. A deadly conveyance of an invisible enemy.

So, how best to demonstrate welcome and peaceability? There doesn’t appear to be a consensus yet on how to greet others, and the resulting confusion is kind of amusing. Think of it like a contemporary dance performance, as people wave, flail and contort to convey goodwill. Merce Cunningham, c’est moi.

Line up for your life

I like a good queue. A well-ordered, clear demarcation between you and the next germy person is quite calming. It’s always driven me slightly mad to be crowded at the checkout counter, and now I have licence to say, “Please allow for more space between us and our grocery items, fellow human. Your bagged spinach is touching my tub of mayonnaise, and I cannot allow it to stand.”

It used to be that extra space at the checkout was a way to hide your PIN number from others, but now you’re protecting your very continuation on the planet. It’s okay to ask, in the politest fashion possible, that people maintain the two-metre rule and stand on their little circle of social distance. Just don’t get Kareny about it.

In pre-pandemic days, the sight of a youngster’s painted brows, troweled on like a bricklayer’s work gave me pause, but now I see it as a great and useful thing. You can say a lot with your eyes, but you can say even more with your eyebrows. Think of them as the Tom Cruises of your face, able to leap up, crunch together and do a barrel roll off a burning building.

Make those hairy little suckers do the heavy lifting for the rest of your face, dancing across your forehead like Fred Astaire on ice skates. Whatever your current state of being — happy, angry or constipated — you can convey a galaxy of information with the cocking of a single arch. Look to Mr. Spock as your ultimate eyebrow god.

The importance of enunciating clearly is even more important now that most folk are wearing masks in public. Think of Henry Higgins forcing poor Eliza Doolittle in My Fair Lady to form clear lucid vowels and consonants around a mouthful of marbles, and you’ll understand that you have it easy.

Leaving aside that film’s sexist and paternalistic interpretation of Shaw’s original play Pygmalion, there is something to be learned from speaking like a trained thespian. Do it from the diaphragm so as to make sound come clearly through the layers of cloth, visor and sundry that swaddle you like The Invisible Man.

For some reason, Zoom calls make me incredibly sleepy. Maybe it’s the energy exerted in trying to read a room, or the fact that muted dead air kills conversation, or maybe it’s everyone staring fixedly ahead like they’re in a terrorist hostage video. Whatever you do, try to remain awake and upright, and put on pants so that if something catches on fire in the other room, your workmates won’t be treated to the sight of your holy gaunch running to put out the blaze. 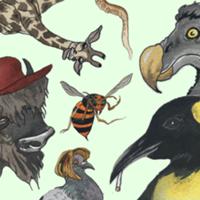 Eight New Species of the Pandemic

A number of recent essays have placed blame on modern selfishness for the continued viral rampage in certain countries. The point of wearing a mask in public is as much to protect others as it is to protect one’s self, and really, manners are the same thing: a system designed to safeguard’s people’s tender feelings as much as your own.

In short: Don’t spit on folk, refrain from peeing on the floor and hold off issuing death threats on social media. Essentially, don’t give into your inner rage and terror. If you must act out, wait until you are away from all humanity, go stand in the shower and shriek for 20 minutes. Afterwards you’ll emerge cleaner and less aggressive, which is good on all counts.

Humans are nothing if not adaptable, and in the face of viral invaders we’ve adopted all manner of different manners, but the fundamentals remain the same. Be truthful, be compassionate, forgive others’ trespasses and try to conduct yourself like a proper lady, gentleman or whatever gender identity you so desire. This doesn’t mean walking around like you’re balancing a teetering pile of books on your head but making certain that other people feel safer, more secure, less afraid.

Like provincial health officer Dr. Bonnie Henry keeps saying, “Be kind. Be calm. Be safe,” so that we never have to hear the word “droplets” ever again.