The arts are supposed to be good for you, right? They ennoble and uplift, offer comfort to the sad and angry, give joy to those in most need of it. Some of the greatest moments of my life have arrived through film, music and books.

But there’s another side to the story.

If you’ve worked in the arts, you may have a different view of life in the cultural trenches.

As the number of arts organizations imploding under the pressure of structural and systemic issues indicate, the reality is not a pretty picture.

The PuSh Festival, Toronto’s Images Festival and Telefilm have all faced scrutiny and a fair amount of condemnation around issues of race, diversity and gender.

And the issue extends across all disciplines and borders.

In New York City, an open letter cited numerous incidents of “covert and overt white supremacy at major institutions including the Metropolitan Museum of Art, the Museum of Modern Art and the Guggenheim.” More than 200 people, both current and former employees, signed the letter.

While leadership in the arts continues to be largely white, it isn’t only cultural organizations facing these issues. Non-profits also suffer from similar problems.

In other institutions, a climate of toxicity and abuse has resulted in even thornier situations.

The Carousel Theatre in Vancouver was the centre of a recent media storm over its artistic director’s alleged toxic bullying of employees. And a report released yesterday detailed “pervasive and systemic racism” at Winnipeg’s Canadian Museum for Human Rights. Even the queen of niceness has fallen from her throne, as both former employees and other celebrities tell tales out of school about Ellen DeGeneres’s mean girl ways.

In some workplaces, this kind of toxicity has reached such a state that, according to an interview with public relations/marketing strategist Esther Buchsbaum in the Montreal Gazette, “I have heard stories of people defecating themselves.”

I don’t remember pooping my pants while working in the cultural sector, but I’ve certainly come close to losing my shit in other ways. As have a number of friends and colleagues over the years.

When I started working in the arts, I did so with the naive and somewhat soppy idea that art could change things. I still believe that to be true. Music, cinema, literature, theatre and dance are still the highest and best things to which we grubby crazy humans can aspire.

But the question lingers. In an industry designed to create beauty and joy, why is there so much suffering and pain?

To understand the underlying issues, you have to look at the culture within culture, which is often one of precarity, fear, insecurity and ego. All the heated pressure involved in producing events can easily curdle into anger and rage, creating wounds that don’t easily go away.

Money might not solve all problems or remediate every social ill, but it goes a long way in making for better working conditions, and often less racism, sexism and other forms of discrimination, by encouraging a more diverse and accountable field of workers.

It’s not my place to speak to issues of race, but I can talk about money. After decades of working in the arts, I know full well the cost of a career in culture. There is a price to be paid. But you don’t always realize it until much later.

When you first begin working in culture, it can feel like being a member of the clergy: you work for a higher cause, take a vow of poverty, and get flagellated by senior members of the organization. This scenario, coupled with conditions that are endemic to many organizations — long hours, poor pay and extraordinary levels of stress — can combine into explosive stuff that leaves people with something akin to PTSD, all for the sake of making and presenting stuff that’s supposed to bring other people joy and pleasure.

Megalomaniac choreographers, executive directors run amok, and rogue boards of directors are only a few of the things one might encounter.

Then there are the darker, even more troubling things like abuse, sexual harassment and racism, all shunted aside sometimes in the ethos that the show must go on.

But increasingly, it seems that people have had enough. Whether the world-changing nature of a global pandemic is behind this great outpouring, or simply that there is nothing left to lose, a great many people have decided now is the moment to speak some truth.

I would argue that it also has a lot to do with money.

An open letter calling on the federal government to create a system of basic income for artists and cultural workers, released a few weeks ago, was signed by a broad array of different institutions and a staggering number of individual artists.

In plain language, pulling no punches, the call for guaranteed basic income draws correlations between cultural workers and other forms of precarious labour.

“The gig economy is undermining decades of worker protections,” it said. “As participants, many arts-and-culture-sector workers are subject to precarious short-term contracts, without access to benefits, paid sick leave, or even employment insurance. Today, the world of general labour is looking a lot like the way art labour has looked for decades. We write to express our collective concern regarding the precarious state of labour that is in urgent need of reform and redress.”

Spearheaded by artist/organizers Craig Berggold, Zainub Verjee and Clayton Windatt, the campaign is picking up speed with a number of major events and calls to action planned for the fall, including marches in cities across Canada on Sept. 19.

Columnist Tim Schneider wrote about the letter in Artnet News, referencing the annual Out of Reach report that is produced by the National Low Income Housing Coalition in the U.S. The report assesses the affordability of home rentals for low-income workers. Schneider makes the case that artists and minimum wage workers are in the same boat, and that boat appears to be sinking.

“The world of general labour is looking a lot like the way art labour has looked for decades. From Canada to New York to the U.K. and beyond, too many of us are all facing the same structural peril for the same structural reasons. Arts workers’ rights are human rights, just channelled through one particular prism.”

The Canadian movement’s organizers believe a guaranteed basic income can help artists, and potentially offer a new way forward for society at large.

“Canada is at a crossroads. The government can continue to look the other way, allowing our most vulnerable to fall through the cracks of a systematically broken social safety net and perpetuate a history of economic insecurity, anxiety and fear,” they write. “Or, we can take this opportunity to bring about much-needed change and make a meaningful difference that will lead to a brighter future. Establishing a Basic Income Guarantee will help to create a healthier, more equitable social safety system that provides financial support, elevating people and ensuring that no one is left behind.”

In this aspect, artists function like canaries in the coal mine, the first to feel the effects of poverty, but also the first to lead folks up and into the light.

In B.C., the level of precarity is especially grim. Arts organizations here have been woefully underfunded for decades. At the same time, the province is home to the largest percentage of artists per capita in Canada.

Duncan Low, who wrote his doctoral thesis on federal arts policy, has some insights into how economic insecurity has manifested in other types of problems.

“We can all agree that systemic racism should be eradicated at all levels on all fronts (in every employment sector and other areas), but the arts presents a particularly challenging arena,” he wrote. “Only by ending the inherent funding disparities that have built up over many decades across the country can the not-for-profit arts sector successfully face the challenge that confronts it now.”

Countries are contending with this issue in different fashions. In Germany, the government committed billions of dollars to the cultural sector. In other countries, the approach has been more piecemeal.

The Guardian has focused on the state of the arts recently with a series of articles about culture in peril, with a recent piece about the “largely unprotected freelance workforce,” laying out the racial divide in blunt, clear numbers. In the theatre world, freelance workers make up some 86 per cent of all people of colour employed by cultural organizations, whereas the permanent workforce is largely white (82 per cent).

At the end of the article, author Tosin Thompson somewhat plaintively asks: “Why can’t the arts be a stable and viable career? It will only survive if it does away with elitism and democratizes, creating a self-sustaining ecosystem in which each faction is supported by the other.”

Guaranteed basic income might not have all of the answers, but it would be a positive step towards a better, more equitable industry. Before we get there, we must go through the fire, which is where we currently are, in the midst of a great bloodletting, truth-telling, transformative moment. It’s not fun or pleasant, but it’s also necessary. 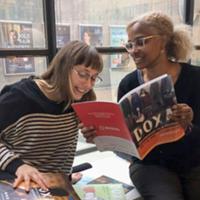 Leah Sandals, writing about the call for universal income in Canadian Art magazine, quotes a petition signed by 1,120 artists and citizens thatmakes explicit the connection between the health of the cultural industry and the greater social fabric. “Artists are the driving force behind the cultural industry and the goods it produces, one of the largest industries in the country, with direct and indirect impacts on many industries, whose profits depend on this cultural content, which is essential to the well-being of all communities.”*

The fact that Canadian Art recently suspended its online publication to look at issues that have arisen in its own coverage makes this statement perhaps even more pertinent.

I think some good will come from this moment of self-reflection and analysis, but a great many difficult conversations need to take place first. It will be messy, unpretty and painful. In a city like Vancouver, where people in the cultural ranks have worked closely together for years, relationships both personal and professional are on the line. But it’s time to tell the truth.