Three Things is a short and snappy live-streamed interview series where we ask people in The Tyee family about what’s on their mind, and look for the connections, both personal and thematic, between their stories and work. 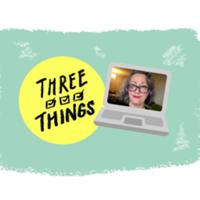 Dorothy Woodend on COVID Creativity and Other Silver Linings

We are pleased to feature award-winning education and youth reporter Katie Hyslop in our next interview. Katie is known for her deeply-researched reporting on B.C. education, foster care, Indigenous issues, housing and poverty. Less well-known is the fact that she is the Tyeester with the best patterned leggings and hula hoop skills.

Like many Tyee journalists, Katie prefers to put her head down and do the work. She isn’t one to bask in praise. Her focused hustle, however, has earned her the honour of being named the 2019 “Champion of Child and Youth Rights,” awarded by First Call BC Child and Youth Advocacy Coalition. Previous winners include Cindy Blackstock and Raffi, so she is in good company. Katie also holds the respect of many working in child welfare, and many more across the country who care deeply about the quality of life of children and youth.

For her Three Things interview, Katie will contemplate how the pandemic has affected young people. She has written and thought about how child and family poverty will deepen; international students lack support; and the public elementary, secondary and post-secondary systems will suffer financially from lack of international students next year.

This begs the question, will the pandemic change school permanently, and for the better?

Join us for a lively and personal interview hosted by yours truly on Wednesday, June 3 at 1 p.m. PST to find out. Register here for the webinar or follow us on Facebook and YouTube where the livestream will be broadcast.

Want to know a bit more about Katie? Originally from Newfoundland, she has been with The Tyee since 2010. She’s appeared on CBC Radio, CKNW, News 1130, Global BC, Fairchild TV and Roundhouse Radio; was republished on Salon.com; and was (briefly) followed on Twitter by former The Simpsons executive consultant Brad Bird.