[Editor’s note: We bring you this piece by a Tyee reader, the latest in our Extremely B.C. series, here in the dead of winter, to remind you of warmer days ahead and adventures they allow.]

My wife Lynne and I were a week into a 250-kilometre kayak trip from Bella Bella to Port Hardy as we explored the Hakai Lúxvbálís Conservancy — 120,000 hectares of land and sea managed under an agreement between the Heiltsuk Nation and the province of British Columbia. The conservancy is ecologically and culturally rich. It has an amazing variety of marine life from grey, humpback and orca whales, seals, sea lions and dolphins to flourishing intertidal organisms. Islands in the area along B.C.’s central coast are known for beautiful lagoons, wide bays and iconic white-sand beaches and they are home to a wide variety of marine birds and animals including wolves and bears.

As we rounded Superstition Point, overcast sky reflected on the glassy ocean. Entering the northern mouth of a large channel we noticed two orcas in the distance, diving and surfacing in the calm waters ahead. As it’s prohibited to approach marine mammals, we stopped paddling and watched them through our binoculars. After a while, the orcas swam out of the far end of the channel and disappeared into a low fog.

About an hour later we arrived at Triquet Island, one of the most isolated islands in the area, recently confirmed to be one of the few areas on the central coast to escape glaciation during the last ice age. Free from ice, the island offered safe and protected village sites for ancient peoples 14,000 years ago. It’s amazing to consider that these village sites are three times older than the pyramids.

Slightly ahead of me, Lynne paddled into a small bay. I tried to follow but the tide was dropping and the water was rapidly draining out and I made little progress. After a short battle with the rushing water, I decided to just put down my paddle and drift, enjoying the serenity.

I was floating about five metres from the rocky shore in three or four metres of water when I heard a very loud whooshing noise directly behind me. I turned to look and was stunned. Two orcas, possibly the ones we had seen earlier, were heading directly towards me at an incredible speed. The whooshing was an orca expelling air after surfacing.

Two huge black fins sliced through the water. I had no time to react. In my kayak I was basically sitting level with the water line. One of the pair shot between my boat and the island while the other torpedoed directly toward me. I was convinced it would ram my boat and there was nothing I could do.

Lynne had just come out of the small channel and had a perfect view of what was happening. She later told me that the two whales split on either side of my boat; one to directly confront the boat, the other to box the boat in and prevent escape to shore.

I sat frozen as a huge black fin swept towards me as if to cleave my kayak in two. Then, at the last instant, it swerved away. The whale seemed to turn off as soon as it realized what I was, or perhaps more importantly, what I was not. The other orca continued to manoeuvre between the land and my boat, then joined its partner as they both passed in front of my boat.

The orcas continued following the shoreline and disappeared around the next corner. The entire incident was over in about a minute, leaving me with mouth agape and scrambling for my camera.

In the moments after the encounter, while I was still tingling, it dawned on me that this was not a chance encounter. Rather, I had been hunted, the prey in a perfectly planned and executed ambush. I was given no chance to react. If I had tried to escape towards shore to avoid the main attacking orca, the blocking orca would have easily picked me off. Had I been a seal or other marine mammal that the orcas must have mistaken me for, I would have doubtlessly been their lunch.

Orcas on the B.C. coast are classified into two different ecotypes as residents or transients, also called Bigg’s whales. Resident orcas do not migrate great distances and generally live in the area from Vancouver Island to Haida Gwaii. They mainly eat salmon and are somewhat smaller than the transients. Conversely, transient orcas, the ones I met, migrate long distances along the coast from northern California to Alaska. They are excellent predators and eat salmon as well as marine mammals including seals, sea lions, dolphins and even other species of whales.

Since my boat is white, we assume the transients must have seen me sitting still in the water and thought it was a dozing or injured marine mammal and the attack was on. We had seen seal pups lounging on the shoreline of many of the islands and the orcas were probably seeking a tasty snack as they cruised the shorelines.

Looking on, Lynne was struck by the intensity of the attack. In retrospect, I was both humbled and awed by the precision and speed of five-tonne mammals working in tandem. The lead orca broke off a mere metre from the front of my boat without grazing it. Although I was surprised and shocked by the encounter, I didn’t have time to be afraid and, in retrospect, I felt the focus of the attack was the boat and not me personally. Indeed, while there have been other incidents when orcas have rushed humans that were in or on the water, only once, anywhere, has an orca actually bit a human.

As natural ecosystems are being degraded around the world, we are incredibly privileged in B.C. to be able to travel some of last intact wild areas in North America. But, all is not well here either. The southern resident orcas are in peril due to loss of their main food supply — Chinook salmon. The transient orcas are doing better and in some locations, populations are increasing. Conservation efforts to save these amazing marine mammals and indeed all whales must be a priority locally and internationally. 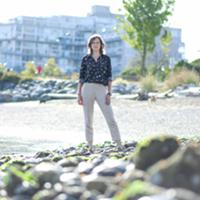 Travelling B.C.’s beautiful central coast in a kayak is an amazing experience and there is no way to get closer to the ocean and its wild creatures. In the following two weeks of our trip we had many more amazing adventures, and, thankfully, we continued to see whales and other marine mammals almost every day. None of our experiences, however, came close to matching the brief moment two transient orcas took an extreme interest in this daydreamer bobbing on a placid sea.

Do you have an Extremely B.C. true story to share on The Tyee? It could be amazing, terrifying, sublime, hilarious, life changing. We publish written essays like the one above, or may be willing to interview you and convert the conversation to an ‘as told to’ written or audio piece. In that case send an email telling us the basics of your tale. If you prefer to share a video or audio piece, please do. We can’t guarantee we will publish every one, but we do pledge to review all we receive and get back to you. Send it to info (at) thetyee.ca with the subject line ‘Extremely B.C.’ And yep, we pay!