What if our governments — or maybe even a well-heeled developer — took a sum such as that spent on one spinning chandelier under the Granville Bridge, close to $5 million, and spent it on affordable portables? Not the ones that cost up to $300,000 each that we are producing in pathetic numbers now, but hundreds of pre-manufactured units, at a much lower price?

Here is just one example: Weizhengheng Prefabricated Modular Container House. You can have one of these ready to go for under $6,000 CDN, which means for $5 million you could buy more than 800. What if we placed five or six of these in various laneways, strung a wire for light bulbs, put a porta-potty at the end of the lane, and called it... some small step, at least.

Because we are stepping away and turning our backs from the needs of the city’s homeless citizens, as anyone who has recently visited Vancouver’s Downtown Eastside knows. Science-fiction writer William Gibson has been there and noticed.

The Vancouver-based author shares his reaction in a recent New Yorker profile by Joshua Rothman: “Instead of fantasizing about virtual worlds, Gibson inspected the real one. Storefronts in some Vancouver neighbourhoods were strangely empty — the drawback before the tsunami of global capital, as though the city itself anticipated the future. ‘Have you been to Vancouver’s Downtown Eastside?’ he asked me. ‘It’s one of the poorest per-capita postal codes in the entire country, and it is absolutely brutal — well, brutal, Canadian style. Addiction, prostitution, street crime...’”

Gibson’s larger point was that we accept this type of thing here in Vancouver and, in slightly different forms, in other global cities. We accept situations that would have been unthinkable only 30 or 40 years ago. We accept it because, again in Gibson’s words, the “Fucked up Quotient,” or F.Q., has steadily risen here and elsewhere until we’ve become inured to the chaos around us.

Gibson suggests that the “future” as we once knew it no longer exists. Why? Because the present is too unstable a base from which to securely posit the existence of a different future in the way we once could. The F.Q. of the present is so high, and rising, that present and future mix into what would be an otherwise interesting hallucination were it not reality itself. 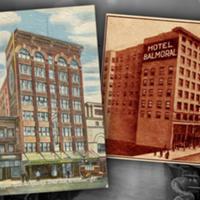 Vancouver’s Nightmare SROs Were Havens for the Rich

In Vancouver, we now spend hundreds of thousands of dollars per marginalized person on addiction responses, hospital care, safe injection services, meal services, shelters, and police management of this chaos. The budget grows each year. But we don’t do the one thing that would make the biggest difference for these struggling souls. We won’t put a roof over their heads. Gibson might note this as visible evidence of Vancouver’s high F.Q.

One Weizhengheng Prefabricated Modular Container House costs less than a three-day hospital stay. Sure it’s not pretty, but at least your stuff is safe. And if public art is your thing, hire 100 artists to work with the residents to personalize the minimalist roofs over their heads. Fight for beauty! Fight to lower Vancouver’s F.Q.!

Happy holidays, readers! Our comment threads will be closed until Jan. 2 to give our moderators a break. See you in 2020.