Does your vagina need some scripture? Some holy writ? Does it, in fact, need a bible?

Dr. Jen Gunter is preaching the good word in her new book, The Vagina Bible.

The Tyee had the opportunity to sit down and have a heart-to-vagina talk with Gunter in advance of her lecture at North Vancouver’s Capilano University last week.

First, a point of clarity. The vagina refers to the interior portion of female genitalia, essentially the canal that connects the outside to the inside. Gunter’s book is equally concerned with the vulva, made up of the labia majora and minora, the mons pubis and our old buddy the clitoris. The book’s subtitle says it all: “The Vulva and the Vagina — Separating the Myth from the Medicine.”

In addition to writing regular columns for the New York Times and hosting the CBC docuseries Jensplaining, Gunter is a Twitter warrior, getting into scraps with everyone from Gwyneth Paltrow to the U.S. president. The woman could talk the hind legs off a horse, but she’s funny, honest and unafraid to call bullshit.

And lord knows there’s some serious bullshit going down at the moment. Any woman in her right mind should be swearing a blue streak given the climate of misinformation being perpetrated about the poor old vagina.

Gunter is a one-woman campaign to stem the tide. Her “vagenda,” as she terms it, is laid out in chapters that detail the proper care and maintenance required for the vagina, everything from cleaning to the lowdown on lube, all of it presented in a matter-of-fact fashion that’s neither pandering nor frightening. She doesn’t spare herself and is frank about her own habits, whether that’s cute underpants or the occasional freak out about some weird bump. 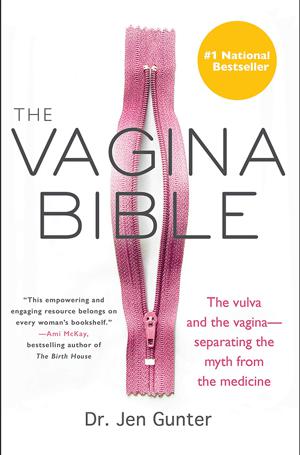 One entire section of the book could have been subtitled “Don’t put that up there!” The things women have been advised to put in their vaginas to make them somehow more palatable is mind-boggling. It’s a veritable supermarket aisle of grocery items — garlic, yogurt, parsley, coffee, etc. As Gunter explains, the best thing to do for your vagina is just leave it alone. It’s a self-cleaning oven that doesn’t need to be steamed, waxed, douched or vajazzled.

Things have been especially rough in recent years. The attack on women’s bodies has produced a laundry list of idiotic pronouncements made by male politicians about rape, ectopic pregnancy, conception, etc.

My big question for Gunter was: why is there so much misinformation?

“It’s a way to control half the population,” Gunter says. “To convince women that their bodies are dirty, that menstruation is dirty.” As she points out, without a woman’s reproductive cycle, humans wouldn’t exist.

But more than simply misleading, misinformation is dangerous. In response to an article published by the Federalist website entitled, “Is Abortion Really Necessary for Treating Ectopic Pregnancies?” Gunter tweeted: “STOP TRYING TO MAKE ‘ECTOPIC PREGNANCIES ARE BABIES TOO’ A THING. If you have never treated a woman with a belly full of blood from an ectopic you should shut the fuck up and sit down and learn before you get someone killed.”

It isn’t only men who are perpetrating myths about women’s bodies. Gwyneth Paltrow is also guilty of some serious flimflam, all of it coming with a considerable price tag. Goop, Paltrow’s lifestyle site, attracted attention when it entered the arena of women’s health, maintaining that underwire bras caused cancer and that steaming one’s vagina with mugwort and wormwood was a good idea.

But it was the jade eggs that drew the most ferocious fire from Gunter. When Paltrow suggested that concubines in ancient China had used such items to keep their vaginas in shape in order to enhance the pleasure of the emperor, Gunter went to town, giving the poop on Goop’s pseudo-science. (The Goop-Gunter battle ended rather decisively this year when a consumer protection lawsuit brought by California prosecutors resulted in $145,000 civil penalties against Goop.)

She admits that she’s been attacked by politically motivated hate sites but says, “It usually goes away.” The medical establishment, too, initially “looked down” on her for her swearing and outspokenness, she says.

But that never changed her commitment to arming women with the tools to communicate more effectively with the medical system, a system that has not always listened to women. In The Vagina Bible, she writes: “The misinformation women are given about their reproductive organs, internet mythology, and the difficulty women face having non-sophomoric discussions about their vulvas and vaginas make accurate communication hard.”

Today more positive developments are afoot, with young women demanding real information about their bodies and making informed decisions about their own sexual health. The Vagina Bible is an important evolution from earlier manuals like Our Bodies, Ourselves, which also perpetrated some questionable practices (yogurt and garlic again). “They were just less informed in the ’70s” noted Gunter. “But at the time, it was a trusted source of information.”

Medicine is a constantly evolving practise. Nothing makes this clearer than the emergence of the clitoris. Fully mapped for the first time in 2009, the 3D model only became available in the last few years, with the shape and size still regularly stumping folk. Contrary to popular belief, the clitoris wasn’t a cute little doorbell but a large internal organ that resembles a praying mantis, an upside-down tulip or a banana peel.

When I express my surprise about how long it took to map the clitoris, Gunter explains that prior to MRI imaging it was hard to get a good scan. Conventional medical research undertaken on cadavers didn’t exactly lead to the best sense of the clitoris, in action.

The myth of the vaginal orgasm is well-covered in The Vagina Bible, but, as Gunter says, it might be just a matter of the right tool for the job. “Think of it as a rotary phone: would you rather dial a phone with a penis, your tongue or your finger?”

Helping your kids — or friends — deal with the tricky stuff starts with being open and honest, Gunter says. “Talk about desire with your kids.” Gunter has two teenage sons and makes a point of being candid and forthright, even about things like her own dating rotation. As one of her sons noted recently, “No one man can tame you.” She keeps a big bowl of condoms in her house, available with no questions asked, and urges her sons to hand out them out to anyone who’s engaging in risky behaviours.

Whatever the problem, Gunter explains, she has always defaulted to logic, whether that’s learning how to properly insert a tampon as a teenager or taking on the U.S. president. The rise of virulent anti-choice legislation in the U.S., seemingly bent on returning women to the dark ages, took an even more sinister cast with Donald Trump lying about abortion in his State of the Union address.

The cruelty of Trump’s pronouncements prompted Gunter to write an essay for the New York Times about her experience losing a child: “Politicians who twist the memory of a birth followed by a death to score political points and mislead about the reality of both abortion and newborns who are born to die should be ashamed of themselves.”

The thing that resounds most profoundly after reading The Vagina Bible is a deep and pervasive sense of agency. This is your body, and you are in control of it. It’s a strange new feeling of ownership. Sometimes it’s the right tool for the job, whether that’s writing a book or casting a vote.

Here is where the vagina gets political. Gunter urges everyone to vote and look critically to find candidates they can support. “Canadians have a bad habit of rage voting; it’s really cutting your nose off to spite your face,” she says. “All politicians need to be better.”

Gunter’s candour and down-to-earth manner have earned her the title of Twitter’s resident gynecologist, with an enthusiastic following. When she counteracted Trump’s lies, the story hit the mainstream media. A woman watching the news story in a bar, leapt to her feet and yelled, “That’s my goddamned gynecologist!”