When the writer Shulamith Firestone published her feminist manifesto, The Dialectic of Sex: The Case for Feminist Revolution, in 1970, it became a publishing sensation. Half a century later, it’s her call for the development of artificial wombs for which she has become, often mockingly, remembered.

But with abortion rights and reproductive technologies both urgent issues today, her arguments about the exploitation of women’s reproductive labour remain very relevant.

The Canadian-born Firestone was an art student and leading figure of the emerging Women’s Liberation movement in Chicago and New York when she published her manifesto. She’s known as a second-wave feminist, part of the vanguard of women organizing in the 1960s and 1970s for a regeneration of the feminist movement that had begun in the late 19th century. Her book sold widely and attracted both praise and condemnation from both mainstream commentators and other feminists.

The reason for the controversy was that Firestone announced that “pregnancy is barbaric” and identified women’s childbearing role as the source of female oppression. And, as part of her imagining of a utopian future that had solved the problem of gender inequality, she proposed that biological reproduction be replaced with ectogenesis — the development of embryos in artificial wombs — in order to free women from “the tyranny of reproduction.” 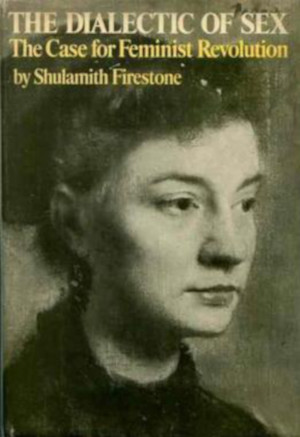 Cover of the first edition with a portrait of an anonymous woman by Edgar Degas.

In 1970, Firestone’s proposals were easy to dismiss as the stuff of science fiction. But in 2017 scientists succeeded in making a “biobag” that gestated a lamb fetus for several weeks. The ethical and political implications of any potential human ectogenesis are only starting to be reckoned with. For example, artificial wombs could radically change the terms of the abortion debate.

Firestone saw them as an opportunity to increase women’s reproductive choices and autonomy. But it’s equally possible that this technology could be used to justify new forms of control over the bodies of pregnant persons, with anti-abortionists arguing that abortion is no longer necessary if fetuses can be transferred into artificial gestation.

Firestone believed the historical origins of women’s oppression lay in the uncontrolled pregnancies undergone by fertile women before effective contraception became widely available. The fact that most women of childbearing age would be caught up in a constant cycle of pregnancy, childbirth and nursing small children, meant that women became dependent upon men for provision of the necessities of life such as food and shelter and excluded from other social functions. This created the first class division among humans — male producers, female reproducers.

Firestone’s point was that all this could be changed. Developments in reproductive technologies including reliable contraception, safe abortion procedures and emerging IVF technologies created the potential for women to gain control over their reproductive capacities. They could choose to enter into motherhood, or not, according to their own wishes and designs.

But the problem was that in 1970 the technologies that promised this autonomy were under the control of patriarchal and conservative forces that denied women abortion, or allowed contraception only to married women. Borrowing from political theorist Karl Marx, Firestone called on women to temporarily take “seizure of the control of human fertility” — to appropriate technologies of reproduction for themselves, just as the proletariat must seize the means of production. By this she meant that women themselves should have control of abortion and IVF, and not be dependent upon male-dominated institutions of politics and medicine.

With women freed from their traditional roles in reproduction, Firestone believed that a different kind of parenting could emerge. The nuclear family, which she saw as a symbol of male power, could be abolished and replaced by a diffuse structure of parenting in which children would be raised by groups of adults, named “households.” Sharing parental responsibilities would enable women to become mothers without having to sacrifice their former occupations and identities. Children would benefit from having nurturing relationships with multiple adults, while parenting would open up to people unable to become biological parents themselves.

The evolution of feminist theory since the second wave has revealed serious flaws in Firestone’s work, among them a blindness to the historical abuse of black women’s reproductive capacities, and a fear of the body that led her to focus one-sidedly on the physical challenges of pregnancy. She characterized childbirth as being “like shitting a pumpkin.”

But today, her manifesto is nonetheless being returned to by feminists such as me. This is partly because her work resonates with the principles of the reproductive justice movement, which demands the right not only to end an unwanted pregnancy but also to parent under conditions that allow both children and parents to flourish.

Firestone is also increasingly being cited as an influence by xenofeminists, who advocate the “hacking” of technologies for progressive purposes, and by those seeking to rethink kinship and caring beyond the biological family, such as queer theorists and “full surrogacy” advocate Sophie Lewis. 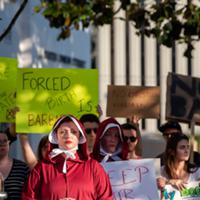 The War on Women Enters a New, Even More Dangerous Phase

Shortly after the publication of The Dialectic of Sex in 1970, Firestone retreated from the feminist movement and from public view. It appears that she concentrated on her career as a visual artist, while also coping with recurrent mental illness for which she was sometimes hospitalized. She died in New York in 2012.

While it’s the call for artificial wombs that Firestone has been remembered for, her vision of a progressive society was always much richer than a desire to abolish pregnancy entirely, and included recognition that some people might wish to continue reproducing in the “old-fashioned,” biological way. What was most important to her was that “the decision not to have children or to have them by artificial means” become “as legitimate as traditional child-bearing.”

What makes her book worth returning to is its central recognition that the capacity to become pregnant is the ground upon which much exploitation and inequality still operate, and that addressing this will require society to think in radical ways.