In the film Maker of Monsters, legendary Kwakwaka’wakw artist and activist Beau Dick tells a story about a piece of wood.

The wood in question was a chunk of red cedar that had washed up on a beach in White Rock. The owner of the beachfront property had sawed the cedar log into firewood, but was so struck by the beauty of the wood grain that he kept a good-sized block of it in his basement. There it sat for years, until a friend of Dick saw it, and asked if he might have it to give to the Haida carver. The chunk of cedar took up space in Dick’s studio, where it was variously used as a table and doorstop, until one day, the artist suddenly took notice.

As Dick, who died in 2017, says in the film, “I stopped and looked at it one day, and I said in my playful manner, asked it, what do you want to be? I touched it, and I closed my eyes and whoof! This image of a crooked beak appeared in my corneal cortex so clear… I said ‘Hey, I know what to make out of this piece of wood!’ I grabbed it and went at it…I nailed it, but wait a minute how did that happen? Hey, wow! Something else was making this all happen, it wasn’t me, I was only a part of it.”

The curious life of objects is on full and glorious display in a number of exhibitions in Vancouver and Whistler at the moment, including the Museum of Vancouver’s Haida Now, the Museum of Anthropology’s Culture at the Centre, and the Audain Art Museum’s Beau Dick: Revolutionary Spirit.

All of these different shows have one thing in common: to make visible the extraordinary cultural and social history of Indigenous people in British Columbia.

The critical importance of being seen emerges throughout Haida Now, a new exhibition at the Vancouver Museum. The show, guest curated by Kwiaahwah Jones in collaboration with Viviane Gosselin (MOV’s co-curator and director of collections and exhibitions), brings together 450 objects from MOV’s permanent collection, many of which had been sitting (unidentified) in the museum’s archives for years.

On a pleasant Friday afternoon, curator Jones walked me through Haida Now. She is an ebullient presence, filled with knowledge and bubbling with energy and excitement about the exhibition as well as what it represents, namely, an opportunity to share Haida culture with a wider audience. The MOV show, created in partnership with the Haida Gwaii Museum, is not simply another exhibition of baskets and sculpture. There are film elements, interactive displays, a place for people to hang out and read, and a section where kids can draw and colour. There is even a selfie wall.

It is a massive show, requiring more than a couple of visits to take in all of the detail, different narratives, and the remarkable beauty and design on display. Divided into six different sections, the show is brimming with extraordinary physical objects — hats, clothing, jewellery, sculpture, and masks — but it also contains 42,000 years of history, much of it captured in story and myth. The naming story of the Two Sisters, otherwise known as the Lions, is a case in point and a gentle reminder that the place we call British Columbia is a relatively recent notion. A blip, if you will, on the history of the land.

As Jones notes, the show was the result of many people working together, not only museum and curatorial staff, but also people from the Haida community, who contributed their time and knowledge to identify some of the objects in the MOV’s collection. She says there was a huge sense of excitement and recognition in seeing certain objects, a sense of coming home. As she described these emotional reunions, I had a flashback to inheriting my grandmother’s cooking bowls. Well-used and kind of beaten up, these humble, ordinary objects were nevertheless imbued with her spirit. Every time I use them, I think about her.

Suddenly, it struck home, how strange it must be to have your family’s stuff scooped up, taken away, and stored in a basement thousands of miles away. Removed from their history and culture, these orphaned objects cry out in the same way as Beau Dick’s piece of red cedar, demanding that their real identity be acknowledged. Jones is open and frank about the palpable aura that is given off by different pieces in the collection. Even walking around, you can feel it, like heat waves coming off a summer road.

As Museum Associate Paola Merkins says in one of the show’s short films, the range of emotion was a revelation and gave the exhibition a very personal touch: “Oh, my grandma did this. My nanny did this. It’s fantastic. It’s a different way of looking at our collection. It gives it a new dimension. It gives it life.” This personal, familial connection is embedded in the very design of bowls, spoons and baskets, embellished with clan emblems that reminded Haida people of who they were and where they came from.

The experience of visiting the Haida Now exhibit gives you only the barest sense of what it must be like to have your sense of family, history and personhood simply excised. But museums have a role, not only in facing this problematic history, but also in helping to heal it. As Jones says, the repatriation of objects taken from Indigenous people is an ongoing topic in museum culture, but in the Haida Now show this debate is very much in the public realm.

One of the short films included in the exhibition explains that visitors to Haida Gwaii used to break off pieces of totem poles or dig up caches of jewellery from gravesites to take as souvenirs. This kind of grave-robbing had long been legitimized by collectors and curators, who stuffed their findings into museum archives. But objects, created and imbued with a spirit of their own, have a curious way of finding their way home again. As Jones explains, “With truth and reconciliation, we’re trying to build a better future. It’s going to be doing projects like this and making change for the future, so that we don’t have to suffer cultural differences.”

As much as Haida Now is filled with history, it is the future that is most readily apparent in the way the show is constructed and positioned. The image of a child’s rattle used for the show’s poster contains a multiplicity of ideas, including family, community and most importantly the transfer of knowledge. In this, museums like MOV act not only as conservators and repositories of knowledge, but as active conduits from one culture to another. As Merkins explains, “It’s a transfer of knowledge in a very palpable way. We’re transferring knowledge from the Haida Nation to us as museum people. And we’re going to transfer it to the general public through our exhibition and to the future when we have the new and younger artists. Younger Haida people who are coming to learn about their culture.”

As Haida carver Corey Bulpitt says, his 10-year-old son is part of the first generation born proud to be Haida every day.

Haida Now runs at the Museum of Vancouver until June 15.

Another stunning exhibition, running concurrently with the MOV show is Culture at the Centre at the Museum of Anthropology.

Divided into three main thematic sections — Land and Language, Continuity and Communities and Repatriation and Reconciliation, the exhibition launched with a bang March 18 with an opening ceremony in MOA’s Great Hall that featured singing, dancing and a procession. As Jill Baird, one of the show’s co-curators says, there was not a dry eye in the house that day.

The exhibition features some truly remarkable pieces including an ancient walrus skull, a ceremonial copper, a button blanket bearing the insignia of different clans, as well as maps, multimedia displays, film and audio components. But one of the most critical things that the MOA show does is to identify the makers of these objects, to give names and faces to the artists who made the work. In the case of domestic objects like woven baskets, and other household items, this was not always easy to do, as women were rarely given credit for their work.

I asked Baird if it was common for museums to not know the provenance of the pieces in their collections, and she said, “It’s a little too common, unfortunately.” Older institutions such as the Museum of Natural History or the Smithsonian have a particularly difficult time, whereas the MOA, with the majority of its collection dating from the 1950s onwards, has been able to deal much more directly with this form of erasure. But as Baird notes some things will never be known.

Baird and co-curator Pam Brown talked about how quickly the show came together (eight months) with many of the different First Nations communities actively collaborating with each other for the very first time. The exhibition is also a clear reminder that history can easily be lost, disassembled, or repurposed to fit whoever is telling the story.

It is a long road back to piece together stolen and lost histories, but again, museums can play a pivotal and positive role. Baird cites the example of the British Museum (home to the infamous Elgin Marbles) giving long-term loans of objects in their collection to Indigenous communities and cultural organizations around the globe. 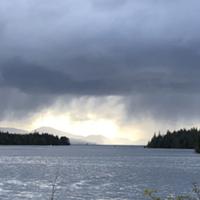 Life and Breath on the Skeena River

Returning Haida objects to their place of origin is only just beginning. But, increasingly, it is part of a museum’s job. As Jones explains, repatriating objects after an exhibition is over is also part of Haida Now. The mortuary pole, famous from an Emily Carr painting, greets visitors to the exhibition, but once the show wraps in June, it will be returned home.

Another reminder of the fragility of history is Marie Clements’ film The Road Forward, screening at the Pacific Cinematheque on Monday, April 16 as part of Harry Killas’ amazing series The Image Before Us. As Clements makes clear in her film, the little-known parts of First Nations history were a revelation to her, in particular the role of the Native Brotherhood and Sisterhood, the Native Voice Newspaper, and George Manuel’s cross-Canada train protest aboard the Constitution Express. As Clements recalls, flipping through old issues of the Native Voice newspaper was the starting point of her film. These too, are objects of Indigenous culture, perhaps, not as visually stunning as a cedar chest, or an argillite sculpture, but nevertheless, every bit as precious.

Even the most mundane objects have a life of their own, but it takes an artist to free the spirit trapped within, to make it visible, and clear so that everyone can see and understand.