Thom Henley hasn’t stopped moving for 47 years. Best known in B.C. as co-founder of the Islands Protection Committee that helped pave the way for the creation of Gwaii Haanas National Park in Haida Gwaii, Henley tells his own story in Raven Walks Around the World: Life of a Wandering Activist, a memoir of his life as the littlest hobo of activists.

At a time when Indigenous rights — or lack thereof — are at the forefront of Canadian political discourse, Raven serves as a reminder of the resilience of Turtle Island’s first peoples. Some readers might also think it hews too closely to the white saviour narrative often found when white authors chronicle their work alongside Indigenous peoples. It’s a question Henley grapples with.

Like many American draft dodgers, Henley came north in 1970, dividing his time between cabins, couches and campsites in Alaska, Yukon and eventually Haida Gwaii. Stunned by the beauty of the northwest islands, and embraced by both the hippies and Haida who lived there, Henley co-founded the Islands Protection Committee that began the successful campaign to save South Moresby Island from logging and eventually helped create Gwaii Haanas National Park.

Henley used what little time he had left over to create Rediscovery, camps for kids to impart Indigenous knowledge and strengthen bonds between Indigenous and non-Indigenous campers through exposure to nature. The program’s popularity led to offshoots in other regions, and today there are more than 30 Rediscovery camps in operation. Today he operates similar wilderness camps for elite students from international schools in Southeast Asia, aiming to influence future world leaders.

The Tyee spoke to Henley during a brief respite at his home in Victoria, B.C., about the race, class and environmental politics of Raven, and how Canada could become a global leader in environmental conservation and Indigenous rights through alliances with Indigenous groups.

The Tyee: You live a pretty nomadic lifestyle. But a person of colour or Indigenous person would not have had the advantages you did: you got work when you needed it, a place to live, rides. Did that thought occur to you when you were writing this book?

Thom Henley: If anybody doesn’t think there’s a privilege in being white in this world, they’re seriously mistaken. But it’s my story: if I was First Nations or black it would be a different story.

One thing I found interesting was the work you do with international schools and giving lectures on cruises for wealthy people, because many activists resent or distrust wealthy people.

I believe we all share so much in common as people. It’s crazy how we exaggerate differences between us. But you can always find that place where you can connect with people. These people were all ultra-conservative — at least on the National Geographic Endeavour they were all American conservatives. But they had a lot of money and they loved wildlife and adventure, so that was our common area.

I’m not trying to rub shoulders with the wealthy and the privileged, I’m trying to influence the way they see the world. That’s why I’m working with their sons and daughters, too.

Indigenous people and environmentalists have common goals. But there are a lot of unsettled Indigenous land claims, particularly on unceded territory. How will that impact the partnership? 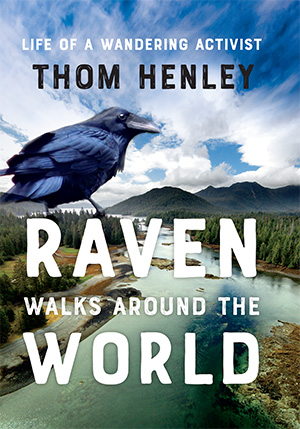 And these rulings that we’ve had here in Canada, going back from Delgamuukw to oral traditions have standing in court, to decisions made on Haida Gwaii: these are global precedent-setting. We’ve got issues here, we’re addressing the issues, but Canada should be commended for court decisions like this, because they’re setting a new trend for the world.

Nowhere [has] a country... recognized Indigenous rights of its first peoples, and it could happen here. There’s no better place that it could happen: we’ve got the second-largest land area in the world, the lowest population per area, relatively wealthy, and more importantly a history of resolving differences through discussion and not grabbing that gun like our neighbour to the south. That’s where I hold out great hope for this country, and I think we’re on the verge of significant change here.

The Save the South Moresby Choo-Choo campaign received support from all kinds of Canadians. But you compared it also to the Oka Crisis, which did not receive support from non-Indigenous people.

Well, there’s a simple reason for that: they were armed. The state could say that they have the moral high ground, because here’s a group of terrorists that are threatening legally constituted bodies with weapons. So they become terrorists.

The Haidas knew better than to have any guns. One young Haida man pounded a spike into a tree up there because it was popular back then to spike trees, and the elders made him apologize to the logging company and remove it.

The thing that really gave them the moral high ground — and this was not a strategy, it was just people being themselves — [was Haida elders and Lyell Island blockade participants] Ada Yovanovich and Ethel Jones were genuinely devout Christian women. So naturally they had their Bibles in their laps when they were arrested, and that image brought in the church groups in Canada.

This was not a threat to the government of Canada: peaceful senior citizens, in their regalia, sitting in the mud, reading their Bibles is not a threat to this country. So it made Canada look like the bully. I think that was the moment that turned it around.

How much influence do you think the presence of white people in the South Moresby campaign had on non-Indigenous support?

If you talk to most Haidas today, the young ones, they think that the whole South Moresby campaign began with the [Haida elders’] Lyell Island blockade. The only reason they had a national stage is because a lot of white people had joined a few Haidas in building that platform for 10 years, so that they actually had a national stage to step onto.

Some people are going to read Raven as a white saviour narrative. What’s your response?

I think I’ve been pretty clear [in the book] that I contributed to the Moresby campaign and I certainly did not initiate it.

The Haidas have been fighting for their lands for years prior to [the campaign]. There’s absolutely no way that area would have been saved if the Haidas hadn’t taken [the] action they did. We’d probably still be having planning team meetings as the last of Moresby is being logged today.

And Rediscovery couldn’t have possibly gotten off the ground without the elders legitimizing it. It would have just been written off as a hippy, back-to-the-land movement.

You mention in the book that it was really hard to get kids outdoors in the age of television. What’s it like now?

It’s impossible. Nobody wants to give up their digital addiction long enough to want to go to camp. And the same actually applies to staff: it’s really hard to find staff that will want to give it up. It is a serious addiction.

The kids on my rafting trip [in Malaysia two weeks ago], they had a 30-minute safety briefing, they’ve got their helmets and life jackets on and the river’s been raging past us this whole time. And as we’re boarding the raft they say: Mr. Henley, which direction are we going to raft in?

This is the disconnect, and it’s chronic and it’s growing. If you don’t even understand the basic workings of nature, how can you even think about working to protect it? Or even know what you’re losing?

I think it’s the only way we’re going to care for it.

We know how the political system works: if we had a Green government and passed all of this environmental green legislation, it could be easily undone every time we flip flop at the ballot box.

So I think it’s better that people with environmental concerns get into every party. Make sure that every party has a green agenda to some extent. And I think that we need to look at commonalities between us as peoples.

I would never say that I couldn’t find common ground with a conservative person on some issue. There’s always a connection, and that’s what we need to be looking at. Maybe issues are going to be resolved over dinner or a walk with someone, rather than placards in front of a government building.