“The Spanish flu,” Laura Spinney tells us, “infected one in three people on earth, or 500 million human beings. Between the first case recorded on 4 March 1918 and the last sometime in March 1920, it killed 50-100 million, or between 2.5 and 5 per cent of the global population — a range that reflects the uncertainty that still surrounds it. …It was the greatest tidal wave of death since the Black Death, perhaps in the whole of human history.”

Yet when it was over, a kind of stunned silence fell on the survivors. People might talk about the carnage of the First World War and the resulting revolutions, but not about the much greater slaughter they had personally witnessed in their own homes and workplaces. My own grandparents, who had small children in 1918 and ’19, never mentioned the flu pandemic.

Part of that silence is thanks to the human tendency to pay more attention to some deaths than to others. The 3,000 deaths in the 9/11 attack are trivial compared to the 64,000 drug-overdose deaths the U.S. suffered last year, or the 660,000 worldwide malaria deaths so far this year. The 9/11 deaths changed the world, while we shrug off far greater death tolls.

But the silence after the pandemic was also like many soldiers’ PTSD: the survivors didn’t much want to talk about an experience that seemed to have neither cause nor remedy.

Spinney, who is both a science writer and novelist, is far enough removed from the pandemic to gain perspective on it, and storyteller enough to condense a global disaster into a chain of vivid stories linked by lucid explanation. In the process, she evokes a world that seems both farther from us than a mere century, and also uncomfortably close.

Nobody knew anything in 1918. The germ theory of disease, a few decades old, was as controversial then as climate change is now. “Virus” was a medical buzzword for “something we can’t see in a microscope that must be causing this or that disease.”

Even the word “influenza” was a hand-me-down from the Middle Ages, when the diagnosis for many ailments was the “influence” of the stars. The 19th century had seen many outbreaks of a respiratory disease called influenza, including the “Russian flu” of 1890 that had killed a million people. Less fatal flu outbreaks occurred yearly, as they continue to do.

So a wave of flu in the spring of 1918 didn’t stir much alarm though it killed more people and those of a younger age than usual — especially in the armies still locked in trench warfare. So many soldiers fell ill that a major German offensive — intended to knock France and Britain out of the war before the U.S. arrived — failed. Even though French and British soldiers were sick as well, they had the advantage of defence. (The Americans, meanwhile, were dying aboard their troop ships en route to the front.)

Most histories of the Spanish flu focus on events in Europe and the U.S., but Spinney’s scope is world-wide. Here is where her book distinguishes itself — by detailed scrutiny of the response to the pandemic in places like Brazil, China and India. All were baffled by the disease and by its seeming randomness. In the gold mines of South Africa’s Rand district, for example, black miners lived under crowded, unsanitary conditions that encouraged pneumonia. They fell ill with the flu, but most recovered. A week later, the flu hit Kimberley’s diamond mines — and the death rate was 35 times that of the gold miners.

Culture played a crucial role. In Spain, a charismatic bishop in the city of Zamora drew crowds into the churches to offer prayers to St. Rocco, the patron saint of plague, making the spread of flu much easier. The authorities tried to forbid mass gatherings; the bishop said they were interfering in church affairs.

Elsewhere, politics promoted the flu. In the Philippines, the Americans who’d occupied the islands 20 years before didn’t try to protect the local population except for a camp where Filipinos were training to join the U.S. war effort. Flu killed an estimated 80,000 Filipinos.

But the flu also promoted politics. After the Russian Revolution and civil war, Lenin brought in the first modern public healthcare system (at least for urban Russians). He asked doctors to make epidemic and famine prevention their top priority because flu and famine had nearly wiped out the Russian working classes.

Before that, however, flu had influenced not only the war but also the peace conference that followed. Woodrow Wilson almost certainly contracted Spanish flu en route to the Paris peace conference in 1919, and like many other cases, he suffered cognitive harm. His illness may also have helped cause the stroke he suffered a few months later; it left him crippled and unable to persuade Congress and the Senate to back the League of Nations.

In India, Mohandas Gandhi contracted flu. Already a leading figure in the struggle against British rule, Gandhi was temporarily unable to act as the epidemic aggravated a drought-related famine. But some of his followers began to build a grassroots organization to provide influenza relief — laying the groundwork for future liberation campaigns.

When Gandhi did recover, he was still too weak to control the response to a British bill that continued the rule of martial law in India after the end of the war. That bill, says Spinney, led to the Amritsar Massacre in April 1919, when brigadier general Reginald Dyer ordered his soldiers to fire into an unarmed crowd of protesters. Somewhere between 400 and 1,000 died. The slaughter was the beginning of the end of the British Raj.

The silence of the artists

If culture influenced influenza, influenza also influenced culture. Spinney explores the eerie silence about the pandemic in the work of 1920s writers. She argues that flu led to a general melancholy among artists, rather than works dramatizing its impact on individuals and communities. 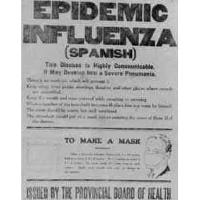 From this she makes an interesting further case: We remember wars and then gradually forget them, while we forget pandemics and then gradually remember them. So, 72 years after the end of the Second World War, we contend with neo-Nazis while we also begin to sense what a shattering event the 1918-19 influenza pandemic really was.

A century later, we are far better equipped to deal with the next flu pandemic but also more vulnerable to it. The 2009-10 “swine flu” pandemic travelled at the speed of modern air travel; British schoolgirls brought it home from a holiday trip to Mexico. It killed over 200,000, a number too small to earn respect. In B.C., we had more than 1,000 cases and a mere 56 deaths — and promptly forgot them all.

The next influenza — whether H5N1, H7N9, or some other strain — could kill a magnitude more. As Santayana famously observed, “Those who do not remember the past are condemned to repeat it.” If we can’t reconstruct our memories of the Spanish flu quickly enough, millions more will die in the next pandemic.