“If you have a Canadian passport or residence, and don’t get to Fort McMurray to get a piece of the fucking pie, you’re basically an idiot,” a passerby says. He almost grabs the camera as he soliloquies about how one can make “a schizzle-schizzle-my-dizzle load of money” and then leave to live somewhere else.

Such a philosophy permeates Vancouver filmmaker Julia Ivanova’s stunning documentary Limit Is the Sky, a documentary that tracks the lives of residents of Fort McMurray before the oil price collapse in 2015 and wildfire of 2016 shook the city. (The film had to be re-edited after these events.)

There are very clear divides in Fort McMurray, and Ivanova is adept at bringing them to the surface. The population is dominated by men — bars and clubs are sausage fests where “on-site workers” are the alpha males. Immigrants come to the city for the promise of making their fortunes, but when one of the people in the film tours a local college, a group studying how to operate oil sands equipment is composed of all muscular white men.

Limit Is the Sky follows several characters — most notably Max, a hairdresser from Lebanon; Sable, a young woman who moved to Fort McMurray with her boyfriend; and KingDeng, a musician from Sudan. Theirs are the stories on the margins of this economic boom. They come to try to make a living, but are either rocked by their inability to achieve the promise of wealth or shaken by the economic, environmental and personal catastrophes none of them saw coming.

Ivanova is an accomplished filmmaker. Her 2011 film, Family Portrait in Black and White, which followed the racism endured by biracial children in Ukraine, premiered at the Sundance Film Festival and won Best Canadian Feature at Hot Docs in Toronto.

Limit Is the Sky plays at the upcoming DOXA Documentary Film Festival (see sidebar). The Tyee connected with Ivanova before the festival to talk about the experience of making the film.

How did you end up meeting all these people?

“The National Film Board wanted to make a film about Fort McMurray. We went... it was the first time I saw the city. It was very different from Vancouver environmentally and lots of young people were living there. You could feel it, a young energy.

“We decided we would make something about young people. I started to look for a way to find interesting characters for the film. This is a place where the whole country goes temporarily to work and to make insane amounts of money. There was a very different attitude to the land and to the place than what I ever encountered anywhere else.

“It was go use for your own benefits, and leave as soon as possible. So I wanted to find people who were more thoughtful, more interesting, that had more sensitive souls. I wanted to know what would make a young person go to the oil sands in order to make money to pursue their dreams. I wanted to discover what dreams are there, including [those of] immigrants.”

Gender plays a very important role in the film. The community, especially the on-site community, was very male dominated. What were you taking away from that?

“Things have changed drastically in four years, and the gender balance has improved a lot. Fort McMurray consists of two parallel universes. One is the town and the people who live in town, but a completely different one is the camps. A huge percentage of oil field workers live in the camps. It would be more than those that live in the city.

“When I came in 2012, it was 20 to one [male to female]. When we were researching we went to the camps, and you literally would see 20 men and one woman. They live like that sometimes for three weeks. It is very strange to experience. But in the city, a guy [in the film] was saying it’s four to one, but in 2012, I think it was seven to one.

“It was a period of great boom for the city, so in a short period of time fancy breweries were built. The place became so much more civilized and average. I was missing the rough edge Fort McMurray had and that I relate [to] so well, because I am a creative person. I am attracted to more in-your-face rough things.”

The oil crash and the fire happened while you were still making the film. How did that affect the narrative you were constructing?

“The crash affected the film in the way it affected people, meaning it was absolutely out of the blue... [We were building] the narrative, all the script and steps in it, and then the reality comes. Everything we wrote was edited already and the whole story, beginning, middle and end, somehow needed to be reworked.

“It’s difficult on a creative level to rework things, because every story [was] worked out before the crisis. I was editing, then the crisis came and it deepened the story. It became way more philosophical. Before I was looking at this place as El Dorado where young people go... I wanted to see whether El Dorado makes people happy and what can prevent you from becoming a happy member of the El Dorado family.

“Then suddenly it was not about El Dorado anymore. It was One Hundred Years of Solitude... where Macondo experiences a boom because of workers who come to work on banana plantations. Then it goes through a period of sharp decay, people leave, and nature takes the place back. It destroys the leftovers of human presence, the plants destroy the foundation of the houses, and eventually there is nothing left.”

It’s kind of remarkable that the film had to change so much as a result of something that nobody saw coming.

“That’s exactly how we live as a society. Regardless of how well things are going, the situation can always change in a split second. That’s what’s happening in the economy, in the world and in society. Any change of power at any place in the world is happening very fast and out of the blue. But I think that in Fort McMurray, because it’s such a condensed story, it is like the world... It is the story of us, each of the characters represents just one type of person who lives in this world.”

Limit Is the Sky will play on Friday, May 5, at 6:15 p.m. at the Vancity Theatre. Tickets can be purchased here.

The film will screen as part of the DOXA Documentary Film Festival. The festival will run from May 4-14 in Vancouver. The full program for the festival can be found here.

Limit Is the Sky will also be released online on May 16 via iTunes and the National Film Board website here.

We know why Fort McMurray is important from a political, economic or environmental standpoint, but why was it so important to show the people of Fort McMurray?

“For me, it was important that Fort McMurray was attracting a large number of young specialists, a number of young graduates from universities from Ontario to B.C., because that was the place to jumpstart your career. You are given a choice: either to carry copy for somebody in an office for another five years and then you do something, or you just graduate and are offered a job in Fort McMurray as a city planner. You think, ‘I will go to Fort McMurray for three years and then I will leave.’

“There were tons of people that would go there, and they would also struggle with this feeling, ‘I am participating in the exploitation of an expansion of the oil sands.’ But I’m doing it because it’s beneficial for me. It’s not much different from what the young workers are doing working in the oil fields. We find a way to justify whatever we are doing.

“The same with me. I’m making a film in Fort McMurray and I am fascinated by the place, but it serves my purpose. We are very fast to jump to conclusions that someone else is doing something that we disagree with, but if we are given the choice I’m not sure we will be as pure. If given the choice, I don’t think all of us make a choice based on the interest of the planet rather than [our immediate lives].” 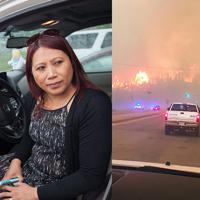 Is there anything that this experience has taught you? What are you taking away from this film?

“I can’t say that this film makes me optimistic about the future of our planet.

“One of the characters in the film... when she’s driving the car, she’s saying something that other people would not dare to say but she does, which is about the environment. She chose this job because it’s easy money and she understands that her work contributes to environmental destruction but then she looks in the camera, she smiles and she says, ‘But I think it’s a part of life.’

“The way she spends this money shows that we often just throw out the money that we gain through hard work and exploitation of the natural resources. Money that we could easily live without — in some cases, it’s not everybody’s case. My optimism has been reduced by nobody ever saying, ‘I have enough and I can live with what I have from these years in Fort McMurray.’”

Limit Is the Sky will play on Friday, May 5 at 6:15 p.m. at the Vancity Theatre. Tickets can be purchased here.

This interview has been condensed and edited for clarity.