From Occupy, Idle No More and the Maple Spring to street-fighting in Greece, from strikes in China and India to the surprising support for the left-leaning Jeremy Corbyn and Bernie Sanders, the fight against capitalism has taken new, exciting forms around the world. The question now is whether protests can develop and find links with others. That in turn requires forming a vision for the future that people can believe in and work towards. In his new book, Viking Economics: How the Scandinavians Got It Right — And How We Can, Too, George Lakey outlines one such vision.

Lakey has a record of scholarship and activism that stretches back to the early 1960s when he trained American civil rights workers in non-violence and civil disobedience. During the Vietnam War he sailed through the war zone on a Quaker peace ship to deliver medical supplies and publicize the anti-war movement. He has led over 1,500 workshops on social change and education on five continents, including many in Canada, notably with CUPW, and is the author of several books on the subject. He helped create the activist training organization Training for Change and is a regular columnist for the online publication Waging Nonviolence. His record of arrests for non-violent protests is extensive, starting with the civil rights movement and, most recently in 2014 as part of the Earth Quaker Action Team protest against mountain top removal coal mining. He is, therefore, well qualified to write about organizing for social justice.

The book is part of his longstanding argument for the need for a strategy for change. Lakey is quick to point out the strength of Occupy and other movements, but he stresses the need for oppositional movements to grow and to develop plans for moving forward that go beyond registering discontent and protest. Crucial to moving forward is articulating a vision that is practical, popular and pragmatic. The aim of this book is to give North American readers a sense of what is possible by demonstrating the successes of Denmark, Sweden and Norway. 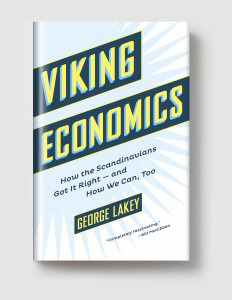 Tyee readers will know some of the Scandinavian story that Lakey outlines. Nordic countries do better than Canada in most social metrics. Crime and recidivism rates are lower. Education, from K-12 through vocational and university training, is free. Affordable childcare has empowered women. Social programs shield the population from the booms and busts of the market. Unemployment is lower, wages and salaries are higher, vacations longer, and the work week shorter. Most importantly, the gap between the richest and the poorest is much less. This is crucial, for the demand for economic equality is about much more than income. Even in Canada, with a health-care system that is notably more equal and universal than that of the U.S., income, not diet or smoking habits, is still the single biggest, best predictor of mental and physical health outcomes. Lakey demonstrates why economic equality matters and how the Scandinavian countries have moved towards it.

The book makes no argument that these countries have solved all their problems. The Sami, the nomadic Indigenous people who travel across Scandinavia, have long been victims of discrimination. Anti-immigration sentiments and racism have grown and have been whipped up by right-wing opportunists. Statoil, the oil company largely owned by the Norwegian government, has created economic benefits but has been a major investor in the Canadian tarsands. Lakey acknowledges all this, and more. But again and again he outlines how Scandinavians look for and work for inclusive, creative, democratic solutions. The Sami and their institutions have considerable authority in Norway and Sweden. Public pressure induced Statoil to divest from its tarsands holdings. Public opinion polls show that Norwegians overwhelmingly believe that immigration and ethnic diversity are positive developments. As the gains of the Scandinavian countries are threatened, people continue to fight back, and win. 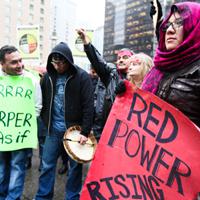 Idle No More, Meet the Norwegians

Lakey has no utopian faith in parliamentary democracy. He does not argue that voting for a particular political party is sufficient. He outlines the historical battles and popular protests that forced governments, whatever their professed politics, to meet the demands for equality and shows how the battles are being fought today to keep and expand those demands. Nor is he content with social democratic reforms. He does not pretend the Scandinavian countries have gone far enough. But he is not naive enough to believe that the ability and desire to fight back come from increased misery. They come instead from a vision for the future and from the hope that change is possible. The experience of Scandinavia is proof that we too can do better in the here and now so we may build on successes to an even better future.

At the same time, Lakey offers practical ideas on how to build a successful movement, based on his experiences around the globe. It needs to actively seek allies; it needs to be diverse and democratic. It needs tactics that are creative and that empower the activists while inviting in the timid and unsure. As we watch the debacle of the U.S. election and are reminded of the limits of parliamentary politics, the lessons of Viking Economics are important. Lakey does not pretend to be the last word on social change. He does, however, point toward our next steps.