[Editor's note: B.C. authors Larry Hannant, David Yorke, Ronald Liversedge, Alec Wainman and Serge Alternês feature in an 80 Year Spanish Civil War commemoration event on Monday July 18 at 7:30 p.m. at the People’s Co-op Bookstore, 1391 Commercial Drive in Vancouver. The public is invited to discover Vancouver’s connections to that fight with newly unearthed photographs and a memoir by the British Columbian who took them, Alec Wainman. They are collected in a new book by Serge Alternês: Live Souls: Citizens and Volunteers of Civil War Spain, reviewed here.] 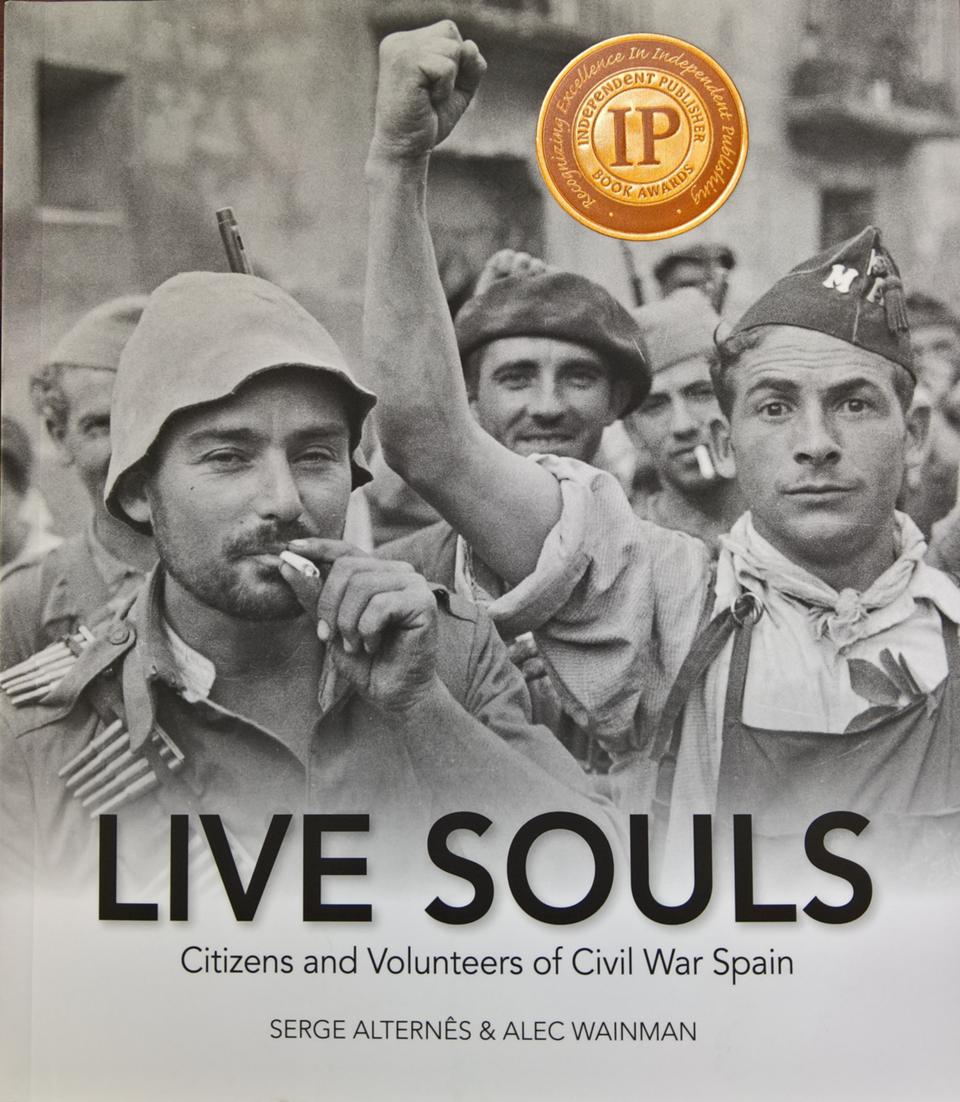 Live Souls includes a recently found trove of photographs illuminating life during wartime for fascist-fighting Volunteers in Spain 80 years ago.

The Spanish Civil War is edging towards the far horizon of living memory. There are no more than a dozen veterans still alive.

Those survivors include Fernando Macarro Castillo, better known as Marcos Ana, a poet who signed up with the Republican Army and later spent 23 years in one of Franco’s jails. He is now 96 years old. And José María Gárate Córdoba, who fought on the Nationalist side and went on to be a military historian. He is 97. Or the Englishman Stanley Hilton (now living in rural Australia) who, at 19, jumped ship in Alicante and joined the International Brigades. He, too, is 97 years old. No doubt there are others who were only children at the time, indelibly marked by the first “total war” to be fought on European soil, in which civilians were directly targeted as in the infamous bombing of Guernica. But there cannot be many left.

But history has a way of catching up with us. Live Souls (Ronsdale Press, 2015), a collection of photographs (plus brief memoir) by Alec Wainman, who served in Spain as a volunteer ambulance driver and interpreter, is a reminder that the past is nearer than we think, the repercussions of this internal conflict broader than we might imagine. For the struggle between Franco’s insurgent Nationalists and Spain’s legitimate Republican government was always an international affair, as the former were enthusiastically backed by Nazi Germany and Fascist Italy, Mexico and the USSR weighed in for the latter, and the rest of the world watched on and waxed sanctimonious.

In some ways, the war of 1936 to 1939 was a dry run for the subsequent World War Two, as what would become the Axis powers tried out novel tactics of aerial bombardment and mass terror, while the true stakes of Allied anti-fascism were laid bare: the UK and France (among others) chose not to intervene where they felt their national interests were not at stake. In frustration and anger, thousands of (mostly) young men such as the Anglo-Canadian Wainman, fresh out of a Modern Languages degree at Oxford, travelled to Spain to help in any way they could, believing that the Republican cause transcended national boundaries.

But the global impact of the Spanish Civil War is not measured in geopolitics alone. The Republic’s defeat prompted a diasporic exodus of its adherents: throughout Europe but also to many countries of Latin America. And those who had fought alongside them also ended up at all four corners of the world: Stanley Hilton in a remote town on the border between Victoria and New South Wales, and Wainman on what must have seemed the equally isolated Canadian Pacific Coast, about as far away from the battlefields of Madrid, Catalonia, and Valencia as one could imagine.

Here, in Vancouver, Wainman dedicated himself to teaching Slavic languages and culture at the University of British Columbia, apparently telling few of his friends or colleagues of his experiences back in the heady days of 1937 and 1938.

A treasure of photos unearthed

Wainman died in 1989 and his archive of 1600 photographs taken in Spain with a trusty Leica was thought lost until, very recently, his son (who goes by the name of Serge Alternês) tracked them down, salvaged from the home of a retired London publisher. Now available, together for the first time, in this handsome volume, these images chart the tenacious persistence of memory, the resonance of surprisingly intimate encounters that radiates outward from then to now.

With few exceptions, almost all these pictures are portraits. The first, indeed, is the figure of the photographer himself, snapped close-up (a “selfie,” perhaps?) on a Barcelona street car. His head is back, and he looks somewhat warily at the camera lens from behind glasses that reflect the light from the street and so render the photographic subject slightly opaque, reticently fleeing our gaze. Equally, another photograph that features Wainman, in his khaki shorts, leaning on the bonnet of the ambulance he drove, is strangely out of focus and blurred. This is a portraitist who happily effaces his own image and subjectivity in order all the better to let those portrayed fix their own self-representation. 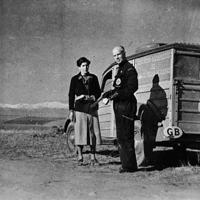 On the page facing the picture of Wainman with his ambulance, for instance, is an image of John Cornford, the British Marxist poet whose “Full Moon at Tierz” and “To Margot Heinneman” are classic meldings of politics and romantic elegy. To add to the mythos of doomed romanticism, Cornford famously would go on to be killed in action at 21. But in this picture, he’s perhaps surprisingly smiling, raising his fist in a salute that seems almost comic, self-consciously humorous. Wainman’s portrait opens up a perspective that goes beyond the time-worn cliché.

And so it is throughout the collection. We perpetually get the sense of a curious eye that lets itself be drawn by its surroundings and by the dispositions of those who are facing the camera. In nearly every case, the people we see are aware that they are being seen, and so participate in their self-representation. The cover image is another good example: it shows what appears to be a veteran militiaman, with an ammunition belt over his shoulder, amusedly looking at us with half-closed eyes as he takes a drag of a cigarette, while next to him a younger man, barely out of adolescence, extravagantly strikes a pose with his fist in the air. Behind them, a small crowd cheerily look on, observing this to-and-fro between photographer and his subjects, self-fashioning and its capture on film. The glory of this book is not that it shows us its varied array of combatants, volunteers, nurses, patients, peasants, children, and so on as they actually are, but rather that it allows them to show themselves as they want to be seen, devoid of any particular propagandistic intent.

Hence perhaps the book’s title. The “life” of these live souls comes through in the poses they strike, and in the freedom that the photographer gives them to strike them. If this is a claim to authenticity, it is so in that it is the record of a series of interactions: the truth of the encounter, of bodies that meet and become subjects through the medium of the camera gaze. The very last image, for instance, is of a young girl in the Basque country in 1939, at war’s end. She stands in front of a laden donkey, her head slightly bowed, her feet a little askew, one arm behind her back but the other (she hopes) almost nonchalantly balanced on the basket by her side. With a broad smile she looks directly at the camera. Here I think the caption gets it wrong in stating that “life remained the same as before for those children who were not orphaned or evacuated.” How could it? But what we see, in all the tension between the awkward pose and the beaming face, is the determination that, despite everything, life will go on.

This book, too, is the product of a similar determination: that even as the past slips into history, as memory becomes unreliable and at best second-hand, the soul of Republican Spain should continue to resonate into the future.

Live Souls: Citizens and Volunteers of Civil War Spain, with photos and memoir by Alec Wainman and text by Serge Alternês, was awarded a bronze medal for best regional Non-Fiction for Europe at the IPPY Independent Publisher awards.