If you haven't already seen the 2014 documentary Alive Inside, fire up Netflix tonight and watch it. And as soon as it's done and you've mopped up what might very well be a small bucket of sad-happy tears at all the lives changed by something so small, you just might want to get started on your own music playlist. 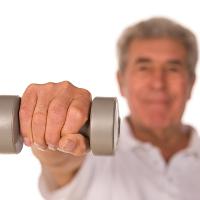 Yes, You Do Have the Power to Ward off Dementia

The documentary is about a quest to give people back their music, most especially those living with dementia in U.S. care homes.

The film opens with a scene of a near-comatose, non-verbal old man being outfitted with a headset and iPod loaded with all his favourite music, and his instant transformation into a wide-eyed, smiling guy singing along and recalling a dozen stories from his youth. (Maybe you were one of the 2 million people who viewed the clip on YouTube?)

Anyway, it's an amazing scene, but there are many more equally powerful ones in the full documentary. I felt like evangelizing after I saw the film. I wanted to start calling up care homes in Canada to ask if anyone was doing something similar, and how I could help. Anyone who ran into me in the days that followed had to put up with me exhorting them to see the film.

And then I got thinking about what songs some good-hearted person might put on my own personal playlist should the day come when I can no longer remember who I am. That kind of freaked me out.

I mean, what if the nice people looking after me presumed that because I was a teenager in the '60s and '70s, that's the only kind of music I want to hear? I'm sure grooving to "The Night Chicago Died" or "Sylvia's Mother" would bring a smile to my face, but being stuck until I died in the memories of my early teenhood would be its own kind of nightmare.

If the goal is to evoke the memories of a lifetime, who but me really knows what those songs are? I'm practically like the guy in the movie High Fidelity, with a different signature song for each profound memory. But it's not like I share much of that with people as a general rule. ("Hey, honey, did I ever tell you that even 45 years on, hearing "Me and Mrs. Jones" makes me feel nostalgic for the boy who first broke my heart?")

Were I to be heading into the dark night of dementia, I'm pretty sure I'll want all the memories I can get my hands on. Which means I'd best get my list together.

I doubt that even my kids would think to include Blue Rodeo's "Rose-Coloured Glasses," which would deny me a magical day in my late 20s when my three young kids and I were singing that song at the top of our lungs after a day on Denman Island, and I suddenly felt free for the first time in my life. No one would know to put on Bob Seger's version of the Tom Waits song "Blind Love," which would mean I'd never go back again to those three weeks in 2013 when the bar in the scary little Moskitia town I was staying in mixed that song in with its many narco-corridos, and I felt less lonely.

"Just When I Needed You Most" -- my son's first heartbreak, and an important memory for me because I realized for the first time that my own heart would be breaking right along with my children's as life brought its cruel lessons. "Murder in the City" -- the song that made us laugh through our anxiety as we headed into our big Honduras adventure. "Hand in My Pocket" -- me and a vanload of Grade 7 girls coming back from my daughter's field trip, stereo cranked so loud that we proudly earned a look of disapproval from a fellow motorist at a red light.

"Bizarre Love Triangle," the stripped-down Frente! version that made me cry and cry in my early days with my partner Paul because I thought he'd put it on a mixed tape he made for me as a hint about how he felt about our relationship (when in fact, he'd just recorded a whole Unplugged album that it happened to be on). Teddy Thompson's "I Don't Want to Say Goodbye," because it conjures a misty morning kayaking in Saanich Inlet when I was listening to it on my headphones as geese took flight, and I paddled through the breathlessly still waters thinking that if I were making a movie of that moment, that song would be perfect for the soundtrack. Daft Punk's "Get Lucky," because my grandsons (and Paul) still love retelling the story of me hearing that song on a road trip to Idaho and mishearing the chorus as, "Grew up on Mexican hockey."

At any rate, you get the picture. My personal playlist is deeply personal, and in all likelihood will span all the decades of my life. So yeah, please do throw some Beatles in there, but don't forget "Sweet Cherry Wine" or "Which Way You Going, Billy?" Don't forget AC/DC, because nothing puts me back on the road with the 2001 Tour de Rock quicker than the distinctive opening of "Thunderstruck." Don't forget "Barbie Girl," because I know I'm going to want to think back on the sweetly astounding sight of my very serious and quiet five-year-old grandson dancing like he was possessed when he first heard that song.

May the gods trigger someone who loves me to go carefully through whatever musical catalogue I'm keeping at the point that I start to lose myself, and find a way to give it all to me.

Even better, they could throw in some new songs that will be the background for whatever memories I'm laying down during those intense final months or years. Nothing would make me happier than to be listening to some cool new tune when the end finally comes, and thinking to myself, "Wow, what a perfect song to remember the moment I died."

Now go watch Alive Inside. And if your greatest-life-hits list is as fun to remember as mine has been, feel free to share it in the comment thread below.