[Editor's note: Today, The Tyee published an excerpt from Tragedy in the Commons, by Alison Loat and Michael MacMillan, about opaque and juvenile party handling in Ottawa. Loat and MacMillan also founded the political think-tank Samara in 2009. Tyee editor Sarah Berman reached Loat by phone to discuss Canadian MPs' struggle against party discipline.]

'CHANGE IS IN THE AIR': VANCOUVER EVENT

After two decades of virtual silence on the subject, Canadians are once again thinking and talking about how to improve the institutions that we rely upon to represent and govern ourselves.

Foremost among those calling for change is Conservative MP Michael Chong, whose proposed Reform Act has suggested intriguing new possibilities for the country's political system, but also laid bare both new and old ﬁssures within it.

Join Tragedy of the Commons author and Samara founder Alison Loat in conversation with Chong, the Honourable A. Anne McLellan and political scientist Stewart Prest at a talk on April 22 at the University of British Columbia's Liu Institute for Global Issues, 6476 NW Marine Drive, from 4 to 6 p.m. 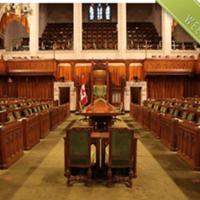 Sarah Berman: In the introduction to Tragedy in the Commons, you say you didn't start out asking MPs about party discipline. Can you tell me about the moment you decided to pursue it? How did it come up?

Alison Loat: "Backing up a little bit, when Michael and I set out to conduct these interviews, we certainly weren't thinking of a book, and we didn't have preconceived notions about what MPs would say.

"It was premised as an exit interview, which is very common in all kinds of places, both public and private, but it had never been done in a parliamentary context anywhere in the world. We really sought to understand why had they won, the process, what frustrated them and what advice they have for current members of Parliament. We had a pretty broad objective, but it was an interesting way to kick off a conversation.

"When we asked what was frustrating, many pointed the finger at their very own parties. I thought they would have been more critical of the other parties, but we found it was much more about their own party.

"It really was the MPs repeatedly coming back to that topic that made us think this is something we need to dig into a little more."

In the book excerpt The Tyee published today, you described party decisions as opaque, arbitrary and even juvenile -- for example, Liberal MP Bill Matthews being sent to the back row of the House as punishment for opposing the extended mission in Afghanistan. How do you think we got here?

"Like any complicated problem, it never just appears overnight.

"One of the big things, going back 30 or 40 years, is the role of the mass media, which made it much easier for a central organization to send a message out to everybody.

"I think that's reversing now -- with social media there's a much different media environment. But that's probably part of how we got there.

"The truth is that we have a system designed to be controlled by the centre. That's because Canadian history has been one of trying to keep together a disparate population -- a very diverse population over a large territory.

"There's a long history of trying to get majority governments, I can extrapolate from what the MPs said, that's probably gone too far now.

"Another one of the big reasons is the MPs allowed it to happen. As you can see in the book they're very remiss to even identify themselves as a part of the party which they are a part of. This anti-politician self-styling came through.

"It's easy to say 'Somebody else must have acted that way, but I didn't.' It's almost like in retrospect they're saying 'I wish I did.'"

What were some of the mechanisms you found driving those party discipline conflicts?

"I know part of it is the prime minister has a lot of tools at his disposal for helping ensure compliance. For example, the postings -- who gets posted to committee and cabinet positions -- it's up to the prime minister to decide how that happens. It isn't like there's an application process or any formal transparency about it. Some MPs are quite shocked by the appointments.

"[Liberal MP] Andy Scott is the example in the book. He had spent many years working on literacy in New Brunswick and had considered himself an expert... and he was put on health."

In these exit interviews you encountered a lot of frustration and brokenness. What emotions are you left with after 80 interviews?

"It's mixed emotions. When you're sitting with these members of Parliament, they're all very remarkable individuals. And we often did the interviews in their homes.

"You hear these stories of really talented and committed people -- everyone has a story about how they made a difference. [Liberal MP] David Anderson in Victoria, he was in his late 20s when he was first elected as a backbencher in the '60s, and he started the first environment committee. He understood the rules, and said, 'I'm going to push and get it done' and he did. The David Andersons balance the more depressing bits -- the central party control.

"It's amazing the sense of responsibility MPs describe when walking into the House of Commons for the first time, and it's interesting to see what people do with it. It's interesting to hear the encouragement these former MPs would give today's MPs and tomorrow's as well."

Find today's excerpt of Tragedy in the Commons here.