The God of Small Things, Arundhati Roy's debut novel, was published in 1997. It won the Booker Prize, sold more than six millions copies, and was translated into over 40 languages. 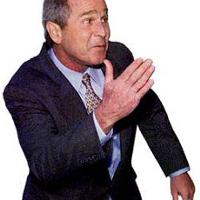 Bushed! It's All for the Best

That was just the beginning. In the 17 years since, Roy has turned to writing non-fiction and become one of the most important and powerful voices in today's progressive discourse. She has used her position as a celebrated author to bring attention to urgent issues from globalization and American imperialism, to the role of gender in resistance movements, to the forced displacement of India's villagers and tribal people in the name of economic development. Careful readers of The God of Small Things have not been surprised. Mode of storytelling aside, speaking truth to power has always been in Roy's wheelhouse.

You can hear Roy speak in Vancouver on Tuesday, April 1 (in conversation with David Beers), a talk presented by Indian Summer Arts Society. Tickets available only in advance online here; more details at the end of this piece.

In the meantime, here are five things you should know about (and read by) Arundhati Roy:

1. "The End of Imagination." Roy's first piece of writing after The God of Small Things was her 1998 essay, "The End of Imagination," a forceful condemnation of the underground nuclear tests in the Pokhran desert carried out by the right-wing Hindu-nationalist Bharatiya Janata Party (BJP) government. While India's nuclear program was being celebrated by some on the basis of nationalist pride, Roy wrote:

All I can say to every man, woman and sentient child here in India, and over there, just a little way away in Pakistan, is: Take it personally. Whoever you are -- Hindu, Muslim, urban, agrarian -- it doesn't matter. The only good thing about nuclear war is that it is the single most egalitarian idea that man has ever had. On the day of reckoning, you will not be asked to present your credentials. The devastation will be indiscriminate.

As far as her public perception was concerned, this was a turning point. She had refused to play the part of the nice novelist and, for better or worse, people noticed.

2. The Narmada dam and "The Greater Common Good." In 1999, Roy joined a longstanding campaign against the Narmada dam project. She told the story of India's uprooted and displaced populations in an article titled "The Greater Common Good." Following a protest outside the Indian Supreme Court, Roy was charged with criminal contempt of court for her criticism of the decision to approve the project and for accusing the Court of "muzzling dissent." She served a one-day sentence in 2002. Following her release, Roy spoke openly against the Court's practice of silencing public criticism through intimidation and harassment.

3. Maoists and "Walking with Comrades." In 2009, Roy spent three weeks living with the Maoist guerrillas in the central Indian forests of Chhattisgarh State and documented her experience in the 2010 publication, "Walking with the Comrades." In a region home to millions of India's indigenous tribal peoples, she describes a war waging between the Government of India and a group of Maoists. This war being fought over land, the environment, resources, and ideology is, Roy tells us, a battle "for the soul of India." She has advocated for the survival of a "non-capitalist society" in the forest because, she argues, "they are not the past; they are the future."

4. "We are all Occupiers." In 2011, as part of her support for the Occupy movement, Roy spoke at People's University in Washington Square, New York. In her speech, "We are all Occupiers," she credited the movement with re-awakening the people's imagination: "You have reintroduced the right to dream into a system that tried to turn everybody into zombies mesmerised into equating mindless consumerism with happiness and fulfilment." Focused on economic justice, Roy urged her audience to call for public ownership of natural resources and essential infrastructure, and demand an end to monopolies and cross-ownership of businesses.

5. Roy's open letter to Penguin. This past February, Roy wrote an open letter to Penguin denouncing their decision to pull and destroy all copies of the American historian Wendy Doniger's 2009 publication, The Hindus: An Alternative History. Penguin's decision to withdraw the book was based on a court settlement of a complaint filed by Shiksha Bachao Andolan, a Hindu group which opposes Doniger's interpretation of Indian history. "Tell us, please, what is it that scared you so? Have you forgotten who you are?" Roy asks Penguin. "You are part of one of the oldest, grandest publishing houses in the world. You existed long before publishing became just another business, and long before books became products like any other perishable product in the market -- mosquito repellent or scented soap."

She will be in Vancouver for a public talk on April 1, 2014 (in conversation with Tyee editor David Beers) presented by the Indian Summer Arts Society in collaboration with British Columbia Library Association, SFU's Surrey Campus Library, the Georgia Straight, SFU's Vancity Office of Community Engagement, SANSAD and the Hari Sharma Foundation. For information, please visit their website.