This month's explosion of enthusiasm for Alice Munro's Nobel Prize win was matched only by the online ass-kicking that was visited on David Gilmour two weeks earlier -- and the two are not unconnected. 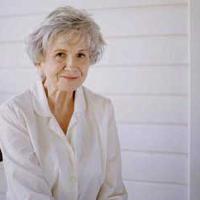 Of course Canadians enjoy being recognized as "world class," the phrase that city halls from Toronto to Vancouver love to trot out at every opportunity. And apparently we don't care how we get the nod. A Nobel Prize winner or a local twit's musings reported in Gawker and The Guardian are greeted with equal, tweeting excitement.

But taken together, Munro and Gilmour tell a tale of a cold war that is being waged against Canadian women writers, and which extends well beyond Gilmour's classroom. It will prevent today's undiscovered version of Munro from becoming a Nobel Prize winner, if we let it.

For those who missed Gilmourgate, in which the CBC broadcaster, turned author, turned professor spent a week opening his mouth just long enough to change feet, here's the recap. Gilmour, 63, runs a class promoting writers he likes to be associated with -- "real guys' guys" -- at the University of Toronto. He told a writer from Hazlitt magazine that he is interested in teaching only "the best" writers, by which he means Tolstoy, Chekhov, Henry Miller, and (inexplicably) Philip Roth.

"But I can only teach stuff I love. I can’t teach stuff that I don’t, and I haven’t encountered any Canadian writers yet that I love enough to teach," Gilmour said. "I’m not interested in teaching books by women."

There's more, it's comedy gold, and it's well worth looking up.

Gilmour's swipe at women writers got all the attention, but what struck me was his contempt for Canadian writers. In an obvious bit of self-aggrandizing, he tried to buff his own image by associating himself with famous Europeans and Americans. Welcome to Canada, circa 1952.

Munro, 82, was equally funny in giving us the world class thrill, albeit for different reasons. The Nobel Prize people had to leave the good news in a message, because the modest author was nowhere near a phone when they announced it. Reporters had no more luck reaching her for comment, so they began calling everyone she'd ever met.

That led Margaret Atwood, witty Queen of the Twitterati, to fire off: "Okay, everyone’s calling me to get me to write about Alice! (Alice, come out from behind the tool shed and pick up the phone.) #AliceMunro"

Her shyness is all the more astounding since Munro is entitled to boast. She has always been a popular writer as well as one of those high-falutin' literary scribes, and her award-winning work has long appeared in magazines like The New Yorker. She's CanLit canon, taught in universities far and wide. And she has a list of major awards that include two Gillers, the Man Booker Prize, the Commonwealth Prize, three Governor General's awards... you get the idea.

By today's standard of self-branding egomaniacs, Munro seems too good to be true. She's the voice of small town Southern Ontario, and she's as far removed from Torontonian Gilmour as you can get. Born in Wingham in 1931, she's a hardworking child of the Depression, who began writing short stories as a teenager and publishing while still a student at the University of Western Ontario.

Her success is remarkable partly because she toiled outside that Toronto bubble and the self-important third-rate talents it often produces. Ironically, I'd argue that it's novelists like Gilmour who have turned the term CanLit into an insult.

Munro wrote while raising three children in Vancouver and Victoria, but she was supported by that first wave of Canadian nationalism that gave rise to the Canada Council in 1957 and marked a country-wide commitment to fostering Canadian talent.

That commitment wasn't just in public grants, or in legislation like the CanCon rules for broadcasters, but in private industries, like bookstores and news media. They reviewed Canadian books. They sold Canadian novels. Our universities taught Canadian authors.

In retrospect, the gatekeepers of the day seem remarkably gender-blind in their selections -- if you could write like Munro (or Atwood, or that other Margaret, Laurence), you were in. You didn't need friends in high places or cronies at the CBC.

Of course, Munro's stories were, and often still are, dismissed by some for being "too domestic." A complaint levelled at great women writers for centuries, it has always been the preferred put-down for Jane Austen. But like JA, there's no arguing with success.

Well, not as long as success is so visible. But as CWILA -- Canadian Women in the Literary Arts -- has been pointing out, women writers are becoming invisible. They did a study proving women's books are reviewed far less often than men's in Canadian newspapers and magazines. When Gilmour mouthed-off the joke was that CWILA had just found its Poster Boy.

'They can't work if we don't support them'

The problem isn't limited to women authors. Women playwrights are being ignored to the point that in 2011 the U.S.-based International Centre for Women Playwrights began handing out an award to theatres that buck the trend.

This year the kudos to go to 29 international companies including Vancouver's Shameless Hussy Productions, Toronto's Factory Theatre, and the real outlier in the list of mostly small, alternative, and women-run theatres, Winnipeg's Prairie Theatre Exchange.

Bob Metcalfe, who has led PTE since 2003, is one of only 3.5 male artistic directors with a season split between male and female playwrights. (The 0.5 is at Factory Theatre, where Nina Lee Aquino and Nigel Shawn Williams share the job.)

Metcalfe, who trained at Vancouver's Studio 58, says that while he does look for women playwrights, it's not quite that simple. PTE does mostly contemporary Canadian work, so his seasons are a balancing act between his audience's interests, his budget, and the plays available. He says the problem of women being excluded is part of a growing problem of Canadian playwrights being excluded, as larger stages opt for producing American plays made from Hollywood movies.

To counter that, Metcalfe launched a playwrights' unit in 2007, designed to create opportunities for local artists. He insisted on gender equity -- six of the 11 scribes are women.

This year Winnipeg media were crowing about how there are seven new plays by local women writers opening on various stages. Not coincidentally, four of the writers are members of Metcalfe's team.

But Metcalfe makes it clear he's not pushing any sort of quota system. PTE is one of Canada's oldest theatres and one of its most successful: they play to full houses and haven't seen a deficit in more than a decade. He's just serving his audience.

"I would never choose a play just because it's written by a woman. I choose plays that are written honestly and that have something to say to our audiences," Metcalfe says. "There is no such thing as 'women's bias.' The women in our playwrights' unit are such different writers and they produce very different plays."

Metcalfe argues that artists flourish where there are opportunities to practise their art, and that's what PTE is providing. They renovated the 320-seat theatre last year, and among the additions was a library designed for the playwrights.

"It's about giving them the space -- including a literal space -- to create. They're the primary creators in the theatre and they can't work if we don't support them."

As he talks, it dawns on me that behind Munro's wonderful Nobel win was some guy -- it was probably a guy -- like Metcalfe, in a position of power, who created opportunities for her and other Canadian writers to be published 50 years ago. And then reviewed. And then sold in local bookstores.

For one brief moment in the middle of the last century there was an infrastructure staffed by people who said Canadian culture matters, and that led to writers like Munro becoming international stars. Despite those double X chromosomes.

Now the David Gilmours of the nation are trying to drag us back to the 1950s, and the real question is whether we will let them. Because if the Gilmours win, we won't see another Alice Munro.

In the meantime, cheers to Munro for her Nobel Prize and her talent and her modesty. And here's a salute to Prairie Theatre Exchange for still believing that Canadian writers are good enough, and that includes Canadian women writers.

I even have compliments for Gilmour, without whom I couldn't have written a piece about women writers being excluded from pages and stage. He may be an asshat, but when all's said and done he's our asshat, and I'll give him this: he's world class.