I've been reading a lot about motherhood lately, because my youngest is finally in daycare. Moms will smile at that statement, but few others will understand the exhaustive and exhausting parenting that is now the norm for moms of the under-three set. We are exhorted to be constantly vigilant, and with traffic what it is, the warning does not seem excessive. Heavy disapproval from strangers attends our every attempt to allow our offspring to run freeish, despite each week bringing another headline about the advancing obesity epidemic that begins in their strapped-in strollers and car seats. We must weigh the unknown effects of chemicals in sunscreen against the prospect of prematurely wrinkled adulthoods. And so on. If there is a problem, and there is, it's our job to fix it, however Sisyphean the task. 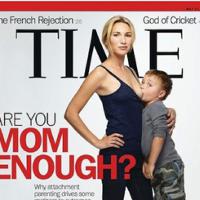 I Breast-fed My Preschooler. Big Whoop

All this to say that I was looking forward to reading the new translation of The Conflict, which is billed as French philosopher Elisabeth Badinter's excoriation of the current state of liberal mothering. Notice I didn't say liberal parenting. Even though, these days, "we" get pregnant (and do we, pray tell, also acquire the attendant varicose veins and hemorrhoids?), it's still mothers who bear the brunt of our collective sense of good motherhood: endlessly available, entirely unselfish, and very near sainted.

Only that's not what this book does, not by a long shot. The much-ballyhooed polemic against extended breastfeeding (guilty), co-sleeping (guilty again), and attachment parenting (three strikes -- does that mean I get to go out?) absents itself without leave. Instead, the book's reasoned tone argues, through factually-buttressed claims, that boosting birth rates in industrialized countries means supporting women in going back to work, not staying home to become their child(ren)'s every resource.

Badinter does attack breastfeeding's claimed superiority, a job tackled far more thoroughly by Joan Wolf, author of last year's Is Breast Best? Badinter's ultimate issue is not with the science, but arises from her suspicions that the dastardly La Leche League and others want breastfeeding mothers to quit work and stay at home, milk-producing zombies, to give their babies that unproven best possible start. Badinter points out that French breast-feeding rates are among the lowest in the industrialized world (indeed, one highly educated British mother I know who gave birth in France simply had to tell medical attendants that she had no desire to breastfeed for them and never to mention it again).

But her a priori assumption that exclusive breastfeeding conflates the "despotism of an insatiable child" and its mother's slavery, like Wolf's book, ignores the reverse: that endlessly buying, preparing, toting, warming, and sterilizing bottles and formula does not freedom represent. Just as breastfeeding advocates do not always tote up the costs of broken sleep and initial struggles, so do naysayers ignore breastfeeding's benefits for mothers: portability, lowered costs, hormonal buffering against postpartum depression and protection against breast cancer.

The Conflict's other targets are soft lobs rather than fastballs. Instead of mounting an offensive against wearing your baby in a sling, for example, a practice that reportedly reduces infant crying by nearly half, Badinter attacks the Seventies-era notion that bonding must occur in the moments immediately following birth. But every mom who's had a C-section, as well as every dad or other non-birth parent, already knows from experience that just isn't true.

I was gleefully rubbing mental palms at the prospect of Badinter savaging moms like me. There's plenty to satirize in the child who uses a full, crisply enunciated sentence to ask for a breastfeed, or the mom who nightly cedes the majority of her mattress to a pushy, horizontal toddler. As my 11-year-old, who continued to try sleeping with me until last year, recently explained, I should be firmer in refusing her little sister the parental bed. "Unless," she snapped, "you want her to end up like me." Serpent's tooth, indeed.

Alas, Badinter's measured, policy-focused book does little to connect with mothers like me, much less convince us our intensive, you-first approach does as much harm to us as good to our children. The latter is also debatable, by the way, but that debate doesn't happen here.

Books that address the visceral push and pull of mothering and the fierce combination of rage and tenderness it in turn inspires include the late, lamented American poet Adrienne Rich's ovular Of Women Born. Other cherished contrarian tomes, like The Battle Hymn of the Tiger Mother, use humour and verve to contradict our most cherished beliefs about our children's "self-esteem." Alas, these treasures on every thinking mother's bookshelf won't be joined by The Conflict anytime soon.

That's because Badinter's book seems to willfully ignore what all mothers know to our cost: that the world of mothering is made up primarily of bodies, our children's and ours, and their messy, unpredictable physicality. Whether it's coping with the tot who just hurled at 3 a.m. or the tween awash in weepy hormonal flux, we quickly come to realize that breastfeeding duration and crib philosophies are luxuries to ponder only after mopping up the latest emergency. We mothers could indeed change the world, if only we weren't so busy changing our offspring's (organic, homespun) diapers instead.