[If there's one theme veteran Olympics reporter and regular Tyee contributor Bob Mackin keeps returning to in Red Mittens & Red Ink, his in-depth account of the 2010 Vancouver Games, it's inequality. Perhaps no spectacle in B.C. history so clearly drew a line between the province's one per cent and all the rest. That was evidenced, in Mackin's account, by the billions of dollars spent on infrastructure and fancy False Creek condos during the Olympics lead-up, money badly needed for Vancouver's homeless or unhealthy. But inequality also glared in less dramatic ways -- the technical glitches that prevented Vancouverites from getting events tickets online, while politicians scooped up the best seats for themselves. 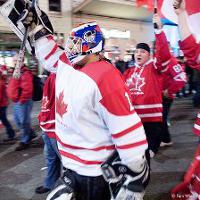 Mackin stresses that the Olympics did bring people together in new and exciting ways. One enduring legacy was the vibrant citizen's movement formed to protest against the Games. This movement's tent encampments, civil disobedience and plurality of voices in many respects foreshadowed the Occupy Wall Street protests only a year and a half away. Mackin told The Tyee he "felt the same energy" at the big Olympics protest on Feb. 12, 2010, as he did his first day at the 2011 Vancouver Art Gallery encampment.

The following excerpt from Red Mittens & Red Ink, which can be downloaded in full here, looks at the early days of this anti-Olympics movement, "the end of the honeymoon period," as Mackin describes it, during the lead-up to the 2010 Games. -- Geoff Dembicki]

About all Betty Krawczyk and Harriet Nahanee shared was a similar age and a common rage.

Krawczyk, born in 1928, was a Baton Rouge, Louisiana native who had already spent more than two-and-a-half years in jail for blocking logging trucks in Clayoquot Sound on Vancouver Island and the Elaho Valley near Squamish. British Columbia newspapers were riddled with stories of drunk drivers and robbers who spent less time behind bars than Krawczyk. Nahanee, a Nuu-chah-nulth aboriginal elder from Vancouver Island, was seven years younger than Krawczyk and joined the Squamish Nation in North Vancouver by marriage.

They became the public face of the protests against the destruction of the Eagleridge Bluffs above the BC Ferries terminal at Horseshoe Bay in affluent West Vancouver. The swampy, evergreen forest and grove of arbutus trees was targeted for removal to make way for the first stretch of the new Sea-to-Sky Highway.

The Coalition to Save Eagleridge Bluffs wondered how the Olympics could be "green" while construction for the crucial highway to Whistler would involve scarring the landscape. The coalition petitioned municipal council, which failed to convince a judge to stop the planned overland route. The BC Liberal government and its Highways minister, West Vancouver-raised Kevin Falcon, said a tunnel would cost too much. The province and its Nebraska-headquartered contractor Peter Kiewit Sons steamrolled forward. Local residents, many of whom were protest rookies, took advantage of favourable weather in the spring of 2006, camped by the entrance to the Bluffs trail and hung a banner reading "2010 Broken Promises, Stop the Scar!" They even piled rocks to create inukshuks, inspired by the Olympic logo unveiled the previous spring.

"I won't leave until we're arrested and carried off or until (Premier) Campbell decides he wants to talk this over," Krawczyk declared at a rally.

On the 39th day of the tent village, West Vancouver Police came to enforce a B.C. Supreme Court judge's injunction that banned protests on the site. Nahanee, with her head held high and her right hand clutching a faded Mohawk warrior flag, was among the first of two dozen people led away by police officers on May 25, 2006. Small, white-haired Krawczyk refused to budge. It took four police officers to carry her away on a blanket.

Work resumed a week later. Krawczyk returned for a one-woman blockade in defiance of the court order. This time she was carried away by just two officers. Krawczyk and Nahanee were found guilty of contempt of court. Krawczyk got 10 months. Nahanee, only 14 days, but her return to freedom was tragically short. Doctors diagnosed her with lung cancer and she died Feb. 24, 2007, of pneumonia.

The 2010 Games were three years away and opponents now had a martyr. The civil disobedience at Eagleridge Bluffs was the catalyst for disruptive, anti-Olympic protests across Canada. Those worried about the impact of the Games on the environment, aboriginal welfare, the homeless and public debt disrupted various stops on a 2008 tour by VANOC sponsor Canadian Pacific Railway and the Olympic torch relay in 2009 and 2010.

Though the International Olympic Committee had scrapped its "demonstration sports" to pare down the Games, it was said that demonstrating was the official sport of the 2010 host city. British Columbians were notorious for taking to the streets and expressing their opinions. Mostly they were peaceful, but sometimes not so. Vancouver was the birthplace of the Greenpeace anti-nuclear and pro-environment movement in 1971. The city drew 100,000 marchers to a 1984 anti-nuclear weapons rally. Half as many union members marched against Social Credit Party government cutbacks in an Empire Stadium rally the year earlier. Sometimes the dissent was ugly, under cover of the night and involving only a handful of people. Such was the case for the five radicals who embarked on a campaign of terrorism as Direct Action.

Anne Hansen, Brent Taylor, Julie Belmas, Doug Stewart and Gerry Hannah were called the "Squamish Five" after they were arrested near the town halfway between Vancouver and Whistler in 1983. The quintet bombed the Cheekye-Dunsmuir BC Hydro substation on Vancouver Island, set off a van containing 550 pounds of dynamite at the Litton Industries weapons plant in Mississauga, Ontario (injuring 10 people), and firebombed a Red Hot Video pornographic video store in North Vancouver.

The February 12, 2007 three-year countdown was an early turning point that caused VANOC to nix all plans for come-one, come-all milestone ceremonies. By Games-time, protesters were viewed by the authorities as a bigger disruptive threat than terrorists, mainly because protesters threatened to disrupt the Games and, it turns out, terrorists did not. A sparse crowd of 1,000 people gathered on the north plaza of the Vancouver Art Gallery -- the city's de facto civic square -- for the unveiling of an Omega-sponsored clock to count down to the Games opening ceremony. Until this day, Vancouver's most famous timepiece was the 30-year-old steam clock in Gastown, which was a magnet for shutterbug tourists despite its penchant for telling the wrong time.

Watchmaker and Olympic timekeeper Omega, being a Swiss company, hired an alpenhorn player to perform. Federal Olympics minister David Emerson headed the list of speakers and was loudly booed by those who didn't forgive or forget his opportunistic switch from Liberal to Conservative ranks after the previous year's election. VANOC staff, in new, light-blue jackets, scurried about. One of them noticed the flag of B.C. was missing from the stage and hastily brought one forward. Just as festivities began, protesters arrived. Some carried the Mohawk warrior flag, familiar to those who watched live TV coverage of the 1990 uprising in Oka, Quebec, where a policeman was killed in a failed bid to oust Mohawk Indians blocking construction of a golf course on disputed land. Soldiers were called and the standoff ended after 78 days.

Outside Quebec, B.C. was the hotbed of sympathetic protests that summer. The federal and B.C. governments responded by creating the B.C. Treaty Commission in 1992 to finally negotiate cash and land settlements with tribes. A decade-and-a-half passed and nearly all West Coast tribes remained without a deal.

Vancouver Police were already lined up behind a barricade. The mounted squad was waiting nearby. Protesters chanted "Homes Not Games" and "No Olympics on Stolen Native Land." The first was the rallying cry whenever the Anti-Poverty Committee staged a sit-in at a Downtown Eastside property set to close for demolition or renovation. The latter was new to many ears. Gordon Campbell and Jack Poole acknowledged and even taunted the angry mob. How dare these people oppose a Games that would bring jobs and opportunity! Master of ceremonies Renée Smith-Valade, the VANOC vice-president of communications, was suddenly pushed aside by Native Youth Movement activist and artist Gord Hill, his face obscured by a bandana. "Fuck 2010, Fuck you Campbell!" Hill shouted before the audio feed was cut and he was wrestled off-stage. APC leader David Cunningham, wearing a Detroit Tigers baseball cap, pumped his fist and led the "Homes Not Games" chant before he, too, was pulled away.

Both were charged with mischief despite claiming they had been pushed through the barrier and their only way out was up, onto the stage. The steel, red cedar and Plexiglass countdown clock was finally revealed, with 1,096 days, 5 hours, 22 minutes and 57 seconds to go until the Olympic opening ceremony. The opposite side counted down to the Paralympics. Guards were hired to protect the clock, day and night, from vandals. Maker EEC Industries anticipated trouble by coating it with a special anti-graffiti film. That didn't stop Krawczyk sympathizer Garvin Snyder from spraying "Free Betty" on the clock two months later.