Let's get uncut, here. There's a reason pop culture has turned its eye onto Miami rapper Stitches and given his raw, coke-slingin' debut single "Brick In Yo Face" over a million views on YouTube. It's not, however, due to ingenious wordplay. At one point the hard-edged trap track has the guy trying to pawn off the lazily hyper-violent couplet: "If you wanna shoot a fade, I'll leave your face leakin'/You better not tell the police I did it." The drug-and-gunplay-driven narrative is certainly part of the charm, but if it weren't for the fact that the bars are being screamed out by a psychopathic teenager armed to the teeth and covered in face tattoos, the video may have just become another blip on the radar, its accompanying No Stitches Is My Status mixtape gathering digital dust on DatPiff. 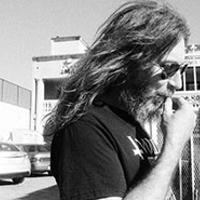 What the Hell, Stephen McBean?

As far as gimmicks go, Stitches visage-adorning ink may not be as intricate as the guys in Kiss pairing grease-paint with jumpsuits, platform boots and out-of-this-world personas, but the effect is more demonic than the sight of Gene Simmons. One of his cheeks is emblazoned with an AK-47, which is a solid form of product endorsement from the dude as he confirms over the tune's relentless, automatic boom that he "don't shoot no pistol." Fittingly, we later see Stitches hanging out in his front yard, hoisting assault rifles in the air as he brags about the non-stop bullet spray that comes out of his "extendos."

Even more terrifying is the Jack Skellington perma-grin tattooed across his face, though this is more nobly explained as part of his street ethics. In an interview with Complex, Stitches explains of his personal code: "The stitches on my mouth -- What I stand for is no snitching, know what I mean? I don't like no snitch. There's no face paint, none of that. It's just who I am. I'm about what I say in my music. You just listen to it and it'll speak for itself."

That said, while he's not going to rat anyone out on their illicit activities, the rapper is sure going out of his way to flaunt his. Backed by mean-spirited synth melodies and skull-hammering production ticks, "Brick In Yo Face" underscores the point that Stitches has apparently made some serious stacks in the Dade County area ("I make drug money, fool, I don't need a rap check"). He'll give you the goods, but you had better have his money when he comes to collect. Simplifying things even further on the already dumbed-down beat is the most beguiling chorus in recent rap history, where the rapper growls out, as if he were a monster jumping out the trap house closet: "I love selling blow!"

Despite the up-front nature of "Brick In Yo Face," there are lingering questions about his time in the drug trade. Though he told Noisey that he was "in and out of jail when I was younger and shit," the actual specifics on his prison time are still hazy.

Stitches - "Brick in Yo Face"

Sticking to his M.O., though, other tunes on No Stitches Is My Status have the MC laying out plans to push product through the U.S. Postal Service ("Mail") or to set up wave-riding drug deals ("Boatload"). It's still the guard dog growl on "Brick In Yo Face" that's putting the spotlight on the spitter, though. The track has made the rounds on the NBA circuit, for instance, having been pumped through hometown speakers during Miami Heat playoff games this spring. A premium, uncut version of the single is being offered up on iTunes, sans annoying DJ tags, for .99 cents. Though currently unsigned, the rapper Instagrammed a picture of himself at the Universal offices last week.

It's hard to say at this point how long the inked-up artist will stay in the spotlight. But by striking out with shouted out bars, coke dealer drama, and terrifying personal style, Stitches' urban horror show gimmick has struck some sort of chord. It's the gamble that a giant grab bag of recording artists take when they're bringing their tailored image to the masses, some obviously more successful than others. It's Elvis's swivelling hips; it's Kris Kross's totally crossed-out backwards overalls and baseball jerseys; it's Screamin' Jay Hawkins rising out of his coffin to put a spell on you; Jesus, it's the Fab Four's immaculate bowl cuts and witty repartee. Either that or it's just Stitches taking a quick career diversion before getting back to the business he knows all too well. In case you missed it, he loves selling blow.

Stitches - "Brick in Yo Face"