Sharon Jones and the Dap-Kings – "Retreat!" 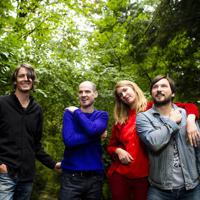 It's been a long time coming, but soul singer Sharon Jones and her Dap-Kings' sixth long player, Give the People What They Want, finally arrived this week following a major health-related delay. Originally set to be delivered last August, the album plans became unglued when the vocalist revealed in the spring that she had been diagnosed with bile duct cancer. While thankfully the growth was caught early on, an invasive surgery was set to sideline the singer for several months.

Now, with Jones having recovered from the procedure and reporting that she completed chemo treatment in December, she's giving her faithful a couple weeks to savour her latest blast before getting back out on the road. As you might expect by the album title, the record finds the veteran artist playing to her strengths.

Starting the set off strongly is "Retreat," a sinister, slinking slice of soul pop that finds a scorned Jones telling an ex-flame to tuck tail and head for the hills if they know what's best for them ("Play with me and you play with fire/I can make you pay," she sneers early in the cut). Simmering alongside her sublimely scratchy threats is a piping hot horn section and gothic girl-group backups, making the cut one of the more ominous entries in Jones' catalogue.

Like past work, Give the People What They Want has Jones surrounding herself with the sonic touchstones of classic '60s R&B. Producer/bandleader Bosco Mann brings the horns, rubber ball-bouncy bass lines and driving beats of the Motown sound to fun-and-full-throttle foot movers like "Stranger to My Happiness" and "Now I See."

For her part, Jones sticks to tried-and-true relationship issues throughout the set, whether once again sticking it to a charmless has-been on the funk-steeped "You'll Be Lonely", or detailing the dizzying ups-and-downs of a roller-coaster romance on the honey-dripping slow jam "Making Up and Breaking Up (And Making Up and Breaking Up Over Again)."

While Give the People What They Want was no doubt titled in earnest, and includes some incredible cuts, a more-of-the-same vibe permeates the back end of the LP via the no-stick melodies of slick yet so-so rave-up "People Don't Get What They Deserve", or the almost tragically-titled "Long Time, Wrong Time," which loses its momentum over a low-key, monotonous swamp samba beat.

Even so, the album ultimately delivers on its promise for anyone appreciative of golden-era R&B. Going by Jones' recent clean bill of health, she'll be giving it our way for some time to come.