While it'd be a lie to say that Rockie Fresh and Casey Veggies weren't grinding all year long, the two rappers definitely hit biggest during its first and final months. Back in January, each artist – Fresh, the Maybach Music Group member from Chicago, and Veggies, the Odd Future ex-pat from Inglewood, CA -- struck out with their own mixtapes, but ultimately capped the year with a collaborative project called, what else? Fresh Veggies. 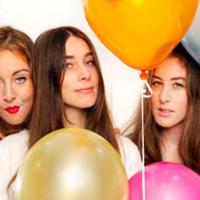 The Year of Haim

Putting the year in rewind, it was Fresh who hit first, by a day, with his Electric Highway mixtape. The freelease was the young artist's fifth overall, but first following a high profile signing to major player Rick Ross' MMG empire, and fittingly it served as a majestic debut for the company. Keepers include opening cut "The Future," which throws Back to the Future samples, a sugary and auto-tuned pop hook and a military boom bap behind Fresh's confident, on-the-way-up bars about "feeling like a billion right now." Elsewhere, though, Fresh brings out both an experimental and confrontational side, spitting hard atop Montreal producer Lunice's frightening icicle-drip synths on "Superman OG" about being "more bomb than Israel or Gaza." He also gives up the regionally-minded diss that he's "Jordan at livin'" while you're no more than a second-in-command Scottie Pippen... at best.

Veggies' Life Changes was a tad friendlier, but no less impressive. Standout cut "Young Winners" thrives off of a snappy piano loop and deep bass bounce, with the verses heading from riding around with a "sassy young thing" that loves listening to his music, to more motivational lines to the young'uns about staying on your grind. It should be noted that Veggies is all of 20 years old.

While the two had teamed up in 2011 for a Veggies track called "Duckin' and Dodgin'," the first collaboration in 2013, "Energy," was delivered just after both MCs dropped their tapes. The playfully braggadocios track builds itself around windswept back porch chimes that had the pair going on about girls all the way between L.A. and the Chi feeling their respective vibes.

Fresh took the lead in the spring with his mini-EP The Birthday Tape, but showed solidarity with his West Coast pal on another Lunice-produced highlight called "Panera Bread," pointing out how it wasn't a big deal that neither rapper made this year's prestigious XXL Freshmen List. Though a quickie, the tape also yielded big numbers like the weed-and-women-indebted rap ballad "Kush Do," featuring fellow bleary-eyed blazer Wiz Khalifa, and the soaring, strings-assisted opener "Top of the World."

Fresh and Veggies' friendship was cemented even further earlier this fall when they announced they'd be closing out the year with another free mixtape, this being the portmanteau-titled Fresh Veggies. The tape was released on Dec. 16, and finds the two putting the shine on their camaraderie over a diverse cross-section of beats. Reflecting another iron-strong bond, the opening title cut features yet another masterful beat from Lunice, this time in the form of a hypnagogic swirl of cough-syrup-spiked synth arpeggio. The track, meanwhile, has both rappers intent on living in the moment ("Let’s roll one up and make a toast, the young is living like kings," Fresh says, closing out the cut).

The champagne-poppin' "Celebrate Life" likewise finds the guys living to the fullest. Spritely standout "Sacrifice" sounds as if the guys jacked an old 8-bit Nintendo theme song for the beat, with Veggies dropping lovey-dovey '90s nostalgia about his girl being like Boy Meets World's Topanga, and Fresh spending his bars talking about trying to make more money so his mom can drive a respectable car. The twosome, meanwhile, opt to take the ladies on a magic carpet ride on hypnotic clapper "Aladdin," and flirt with the jacked-up world of old school acid house on the closing "The World."

As 2013 proved, both Rockie Fresh and Casey Veggies can serve up some meaty material on their own, but the two managed to cook up their most well-balanced meal via the vast and varied Fresh Veggies.