Being that Hallowe'en lands on a Thursday this year, weekend warriors looking to maximize their party count will no doubt be donning their costumes on the club circuit come tomorrow. Speaking of which, if you manage to hit Vancouver club the Cobalt for their weekly Come Friday event, you'll notice a different breed of costumer mixed in with the litany of sexy nurses and dudes dressed up in Heisenberg-style hazmat suit-and-bald wig combos. The club night's second annual "Hallowe'en(ish) Tribute Party" will find a number of local groups putting aside their own songbooks in order to run through the back catalogues of some of their favourite bands. 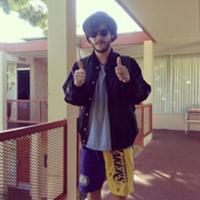 The Paradox of Wavves

This year, new wave crew Girlfriends and Boyfriends will put on the red light as The Police; thrash and pop enthusiasts Phoenix Thunderbird will ride the lightning as Metallica; and noiseniks Shearing Pinx will get wild as The Troggs. The evening will also include a one-off performance from members of Basketball, Aquanaut and Sunshine, uniting to play Smashing Pumpkins tunes under the portmanteau Billy Corgan's Shaved Head (the band name also references obscure outfit Natalie Portman's Shaved Head).

While there are acts dedicated to playing the covers circuit all year long (see Sack Blabbath, Power Clown or any number of garden variety top 40 acts playing bars and bar mitzvahs), the big difference with the Hallowe'en show is that the tribute is rolled out for one night only. But unlike grabbing a tattered bank robber costume from London Drugs at the last minute, a surprising amount of work has to go into pulling off the performances just right.

That said, Risk noted that the sojourn from regular duties can be a lot of fun, and can also "take the wind out of the sails out of all the pomp that comes along with being in a band." Last year, Risk's pop project Sunshine tackled classic tracks from New Order and Joy Division, but he's approaching the Smashing Pumpkins with a tongue planted firmly in cheek.

Noting that he hadn't listened to the '90s alt-rock vets in years, Risk explained that revisiting the group had him realizing that band leader Billy Corgan, talented a guitar player though he may be, wasn't exactly the best at penning a verse.

"His lyrics are just brutal. They're embarrassing," the faux-Corgan explains before listing a series of Messiah complex-indebted passages and clunky lines such as "The fashion victims chew their charcoal teeth" from "Zero." "I can't believe I'm singing them," Risk says with a groan.

While Billy Corgan's Shaved Head appears to be, at least in part, taking the piss out of the Pumpkins' Siamese Dream, Phoenix Thunderbird guitarist-vocalist Jordan Ardanaz is more than ready to jump into the role of Metallica singer James Hetfield this Friday.

"It's kind of embarrassing, but I'm more excited for this than any of the other shows that I've played," Ardanaz laughs. "I get to act out my teenage fantasy."

While the band cites new wave influences like Gary Numan, the chugging, down-picked-licks found on their 2012 EP Repetition and a recent split 7-inch with Girlfriends and Boyfriends suggest Ardanaz spent a lot of his youth banging his head to "Creeping Death" and "Trapped Under Ice."

"That's the music we grew up listening to, and has undoubtedly had an influence on Phoenix Thunderbird's sound," he confirms. "We're doing '84 Metallica. It's that era when they're reaching the apex of their awesomeness, but they're still really raw and punk. That's always resonated with me."

Though Phoenix Thunderbird's post-tribute plans are to finish writing and recording an EP set for release sometime next spring, the band admits that fully slipping into Metallica's skin, if only for a moment, has helped them progress.

"It's certainly tightened us up as a band," six-stringer Ardanaz notes. "The band that we're covering is extremely technical, and it's definitely raised the level of my game, in terms of my rhythm playing. I've had to learn some riffs that I had never thought I'd ever be able to play. "