[Editor's note: In case you're new to Thom Wong's extremely personal but not at all contentious great Canadian song tournament bracket, here's where it begins] 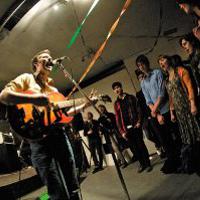 Both overlooked to basically the same degree, although in Sexsmith's case it's hard to tell how true that is anymore -- after the nth article describing him as such you really have to wonder how these writers even know about him. Generally speaking, unknown artists have a hard time getting Coldplay's Chris Martin to duet with them.

Be that as it may, Sexsmith is certainly underrated, if album sales are anything to go by. The man behind one of Feist's best songs, Sexsmith has made a career, such as it is, of sounding absolutely shattered by love and life. If he looked like Jeff Buckley he'd be an international sensation, but since he looks perfectly and wonderfully ordinary he's spent most of his career as the artist other artists admire. Beyond all that, he writes consistently excellent songs.

The Grapes of Wrath happened a decade too early to ride the Canadian band wave into indie rock glory, but even so stand tall amongst their... vertically challenged brethren from the early '90s. Possessed with hooks a-plenty and brothers singing harmony, their songs are the perfect soundtrack to regretful mornings.

Where "You May Be Right" is the perfect pop song (later live versions improved on this perfection with extended organ solos), "All the Things I Wasn't" is what happens when a band limits itself to two minutes to tell a complete story, even finding time for a little orchestral interlude. Both are about losing the person you love, and claiming not to care, while overtly caring a great deal -- in other words, the Canadian love story.

"Words We Never Use" shows Sexsmith as what he might have been: the spiritual successor to Gordon Lightfoot. Between the left channel-only metronome-like drum and the right channel-only plucked guitar -- as if the producer had an aneurysm while putting together the mix -- and his drawn out vocals making every syllable heavy with the loss he's expressing, the song charts similar ground to the Grapes. It's also totally awesome.

So how to choose? Both deserve to go through, and only cruel fate and a totally messed up bracket system have lead to this. Coin flip time.

Winner: "Words We Never Use"

9. "Safe and Sound" by Hawksley Workman  vs. 8. "Theme from a Summer Place" by Percy Faith

It's easy to hate Hawksley Workman. In fact, I'm hating him right now, for showing a ton of verve and talent and then flushing both down the giant toilet of popular culture. Once the weird, theatrical singer opining about jealous cigarettes and sharks eating wedding rings, he's devolved into... well, into Sum 41.

But before that happened Workman gifted us with a travel/love song for the ages, a song filled with such worn out sounding metaphors it's amazing we've actually never previously heard them. It's a wonder anyone had taken a road trip before it.

If you know who Percy Faith is my hat's off to you, but you've definitely heard "Theme from a Summer Place" because it's exactly what it says on the tin, in the same vein as Vivaldi's "Spring". It doesn't so much evoke the summer as encapsulate it completely in a heady mix of swelling strings. Faith is generally maligned as the man who popularised easy listening, but if all that "genre" sounded this beautiful I'd doubt we'd have such an issue with it.

Is an instrumental going to be the best Canadian song ever?

Winner: "Safe and Sound"  10. "This Heart's On Fire" by Wolf Parade vs. 7. "Early Mornin' Rain" by Gordon Lightfoot

What is it with Canadian bands and their seeming unwillingness to both stay together and/or continue to make music? Three years isn't very long in Stone Roses' time, but in blink-and-you've-never-heard-of-it 2013 you might as well have never existed. "This Heart's On Fire" is Wolf Parade at its rock 'n' roll-est, no small thanks in part to Spencer Krug (the weird one) not singing. Dan Boeckner (the rock star one) delivers the song as if it might be literally true; it thrums along with such relentless energy that you forgive him the occasionally nonsensical lyrics:

"I am my mother's hen
And left the body in the bed all day
We don't know what to do."

If Wolf Parade had managed to continue in that vein, unabated by multiple side projects and what seems to be a fundamental lack of interest in remaining, you know, a band, then it might have pushed aside the Nickelbacks of this world to become Canada's best known rock band. As it is, we got one very rocking song.

"Early Mornin' Rain" is early Lightfoot, which is to say best Lightfoot, before the weight of apparently being Canada's greatest artist forced him to sing about shipwrecks. "Rain" is so calm and unassuming that it's easy to forget it chronicles the Halifax fire of 1869, mostly because it doesn't. Instead, it tells a simple story of a man "a long way from home" with a "pocket full of sand", starting with the refrain and heading on its merry way without care for chorus or verse.

While his more famous work leans heavily on rhyming couplets, "Rain" sounds more like free verse -- the rhyming exists only to move the song along. And move along it does, at a pace that makes other Lightfoot songs appear glacial in comparison. It also reminds us that with just his voice and a guitar, Lightfoot is a beast of a performer. Everything else is just window dressing.

In the underrated (by the rest of the world) Canadian bands of the '90s pantheon, Sloan is the trickster god, playing dumb when it suits them while hiding an intelligence that if not fierce is at least slightly confrontational. Maybe it's the glasses that most of the band members wear, but Sloan has always seemed smarter than their "we're a Beatles cover band" persona has revealed.

Ostensibly about suicide, "The Lines You Amend" does sound a lot like the Beatles as filtered through the Violent Femmes, which, depending on where you stand, is either the greatest thing ever or an abomination. Me, I'll take all of that combo I can get.

"The Summer of '69", aka that song all Canadians know, aka the Canadian song everyone outside of Canada knows, aka the song you sing while drunk.

How much would I love the criminally under-appreciated Odds to knock off the (generally) rightly appreciated The Band? Not that much, really, because The Band is amazing -- who else could write songs that sounded like literal instant classics? You'd swear that "The Weight" was an old spiritual or coal-mining tune, but there is Robbie Robertson's name sitting squarely beside it in 1968.

Even spotting them an extra song won't even the, ahem, odds for Odds here, so while the actual contest is moot it's still worthwhile to consider them as they join Sloan, The Grapes of Wrath, and a handful of other Canadian bands on the almost famous stage. "Love Is the Subject" sounds entirely of its time, but damned if it isn't the catchiest example of it, a song I'd put up against any of the Brit Pop brethren they were no doubt emulating.

Look, Caribou isn't beating Neil Young, and that's fine. He's a young buck in an established artists' race, and there's no shame in going out to the fourth member of Crosby, Stills, and Nash. But listen to "Odessa", really listen to it, and you'll hear the future of music all bottled up inside its frenetic melody.

14. "The House That Heaven Built" by Japandroids vs. 3. "The Future" by Leonard Cohen

In favour of Japandroids from Vancouver knocking off Leonard Cohen, possibly our greatest Canadian:

• it has better parts to which you can shout along

• the drums are gigantic

• listening to it makes you feel both younger and more attractive

• it's the song you want to close a bar to

Against that happening -- this single line:

15. "Nowhere With You" by Joel Plaskett Emergency vs. 2. "Suzanne" by Leonard Cohen

Well, I think we know where this is going. Joel Plaskett could write "Hallelujah" and still not win this round. "Nowhere With You" is basically Plaskett personified, a rolling party of a song that plays to all of his strengths with its cleverly integrated title and chant along melody. It's not a deep song but it is a passionate one, and chant-a-long passion is most certainly Canadian. Plaskett will likely never achieve widespread fame -- his songs are too regional and maybe even too Canadian -- but that hardly matters. He's ours to enjoy.

16. "Basin Street Blues" by Kid Koala vs. 1. "Needle and the Damage Done" by Neil Young

Kid Koala proved that Canadian DJ was not just a punchline or paradox, and he did so by being, for a time, one of the best in the game. Whether it was scratching chicken clucks or drunkenly slowing down a horn section, his way with sounds and experimentation inspired an entire generation of Canadian turntablists and producers.

Like me, Koala calls both Montreal and Vancouver his home, but unlike me he's carved out a career of being among the first to use a turntable as an actual instrument. Along with "Basin Street Blues", you can hear this to the greatest effect on the literally titled "Drunk Trumpet", in which a horn player slurs and mumbles his way through a melody. On his latest album, 12 Bit Blues, he hunted down the SP-1200 sampling machine, a limited, to say the least, drum machine from the golden age of hip hop to produce a blues album. Oh, and it came with a cardboard, hand-cranked turntable kit.

For a country not especially known for its electronic or experimental musicians, Kid Koala gives us reason to keep listening.