Last summer I visited Sicily. At a small weekly market in the hilltop town of Castiglione I came upon a fruit I'd never seen before, shaped like a small pear, with amber skin and a stem on top. "Nespole," the vendor said -- a local early-season favourite nearing the end of its annual run. To discover a popular fruit I'd never even heard of was a thrill. The new documentary The Fruit Hunters, opening Saturday night at the VanCity Theatre, reveals that this thrill drives some seriously dedicated people. 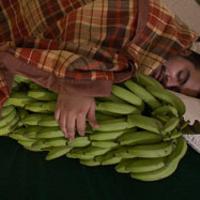 Secrets of the Banana

Director Yung Chang, whose previous documentaries include Up the Yangtze and China Heavyweight, delves into the world of fruit cultivators and preservationists -- not the mass producers but the horticulturalists determined to find and preserve rare and disappearing varieties of fruit. But the film starts with voluptuous close-ups of fruit accompanied by Chang's voice-over cooing that the sight of fruit is downright arousing. For a few disturbing moments it appears we may be about to see a documentary version of American Pie.

Happily, Chang is not planning to show us the citrus equivalent of furries. Instead we follow actor Bill Pullman, who came from a family of fruit growers, as he travels the world in search of novelties and returns home to kick-start a quixotic attempt to create a communal neighbourhood orchard in the Hollywood Hills. We also meet Richard Campbell and Noris Ledesma of Florida's Fairchild Tropical Botanic Garden, who explore jungles in Asia and South America seeking particular plants they can graft and preserve. Then there's Ken Love, a man who became interested in the exotic produce of Hawaii after discovering how little of it was for sale in Hawaiian supermarkets (a phenomenon familiar to Lower Mainland shoppers every summer as B.C.'s local bounty goes MIA at the local Safeway).

As you'd expect there are warnings sounded. Chang reminds us of the danger currently faced by the world's banana plantations -- since virtually all bananas grown worldwide are of the Cavendish variety, the global monoculture could be wiped out by a single plague. And he introduces us to a Penan tribesman in Borneo, a man with an astounding depth of knowledge about local jungle plants -- jungles that are increasingly being razed for lumber and palm oil cultivation.

Chang stages dramatic tableaux to illustrate tales from the rich history of fruit, such as the origins of the McIntosh apple, and how lychee nuts helped bring down China's Tang Dynasty. Although presented as history, most of Chang's stories have roughly the same historical content as the one about Eve and the apple.

But then fruit does have an almost mythic appeal, especially for those of us raised in colder climes. Ken Burns' recent PBS documentary The Dust Bowl described how, for migrating Okies, the allure of California was often best summed up by the possibility of picking oranges from the trees. Similarly, those of us who grew up on a 1960s Prairie diet of canned peaches and plums can still be dazzled by the sight of a corner grocery stocked with pineapples.

There was a time when I considered myself a first-rate pineapple detective. I made so many pineapple-based fruit salads that I developed a finely-tuned sense of which specimens would be sweetest. Unfortunately the resulting overload of acid and fruit sugar eventually forced me to scale back on that scaly pleasure. One day I ate so much pineapple that, to my horror, my tongue started bleeding.

Pullman's powerful connection with fruit cultivation has its dark side too. The Independence Day star talks of the family orchards as places of youthful refuge from a turbulent home life. But I wish Chang had taken the opportunity to explore another aspect of Pullman's tale. Early in the film Pullman casually mentions that he has lost his sense of smell. It's a fascinating revelation, since the sense of taste is always affected -- sometimes almost obliterated -- when the sense of smell is missing. If Pullman can't really taste the fruit he loves, what draws him in? Chang never asks.

The real strength of The Fruit Hunters may be its reminder of one of this planet's simplest and most fundamental joys. For me the film's parade of exotic delights triggered great memories forged in faraway markets and little side-streets. A wonderful aspect of overseas travel is discovering how the usual supermarket suspects do not necessarily hold sway everywhere. Mangosteens can be found in Vancouver -- usually for a hefty price -- but in southeast Asia they're everywhere, and what an intensely flavourful revelation they are. On my most recent Asian trip a Singapore man explained to me that there are at least three local types of durian sold in stores -- one yellow and sweet, two others milky/grey and more bitter. Unfortunately my durian crepe, purchased from a Singapore Chinatown stand, featured one of the grey/white kinds -- I couldn't get the acrid taste out of my mouth for blocks. Last year in Bangkok I brought my own street-purchased mangos to the genial lady who ran the smoothie shack beside my hotel. She combined the mango with passion fruit and pineapple to create a concoction I am craving even now.

As for my Sicilian nespole (a.k.a. loquat), they weren't bad -- sort of a plum/apricot cross, but a little watery. They won't make me forget the taste of a ripe peach. But the melons I bought at that same market still reign as the sweetest I've ever had. I also found huge, juicy figs unlike any I'd previously tasted. And that morning spent in the little Sicilian town is more vivid in my memory than any mountain vista or Greek temple. The gallery of strange, exciting produce on display in The Fruit Hunters is a reminder that life's most sensual pleasures need not be the guilty kind.