The idea of making a film about Margaret Thatcher seems such a patently bad idea that I'm surprised the notion ever stumbled out of the starting blocks, past the stunned punters, dragging its hind end around the track towards the finish line. The Iron Lady is one sad old grey mare, a warhorse in the worst sense of the term, lame, tired, hobbled by a dreadful script and worse direction. Really the old nag should really be taken out behind the barn and put down; it's the most compassionate thing to do. 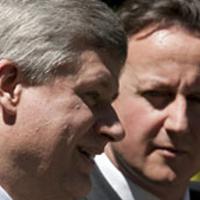 How Strangely You Canadians Elect Your Leader

The simple badness of the film will ensure that in short order, no doubt. Soon enough The Iron Lady will join a host of other films about people you never wanted to live with for 90 minutes, such as: J. Edgar Hoover, George W. Bush, Richard M. Nixon, and Nicolas Sarkozy. The habit of making biopics about politicians has always struck me as very odd, since even the most accomplished of thespians looks like they're doing a form of caricature. For those of us who came of age in the 1980s, Mrs. Thatcher lives in toothy horror in our minds eye, like some ancient evil aunty with pearls and good diction. I remember quite clearly knowing that she and Ronald Reagan were out to get me. They were the enemy then, so it is difficult now to feel much sympathy for the old battleaxe now.

I didn't have a great deal of hope for the film from the outset, since the pairing of Meryl Streep and Phyllida Lloyd is a match made in deepest hell. Ms. Lloyd's previous film, Mamma Mia! is one of the most terrifying things I've ever had the displeasure of witnessing. If the words "Pierce Brosnan Sings!" don't send you immediately into a fetal position, rocking back and forth, biting the inside of your cheek, hoping that the shrieking pain will offset the unholy sounds coming off the movie screen, consider yourself spared. And warned. Stay away from Channel 19, the Women's Network, (where the film is in heavy rotation) and you should be safe enough. I would gladly take zombies, vampires or slobbering maniacs in gore-soaked overalls over Streep warbling Abba songs. But Lloyd and Streep's recent outing lacks even the curious spectacle of famous actors honking out tunes. The Ironing Broad: The life story of Maggie Thatcher the Milk Snatcher, is a boring dreary, sentimental, simplistic and insulting affair.

And yet, it is also perhaps, most curiously, correct about a few things.

Before we get to what the film gets right, we must deal with what it does wrong --and really, there is so much wrong with this film that it is difficult to know where to begin. Let's start with its gender politics. Here is a woman who presided over some of the darkest days of British history, otherwise known as the 1980s, but you would barely know that from Abi Morgan's script, which gaily skips over the Irish hunger strikers, the systemic disemboweling of worker's rights, and the ridiculous loss of life over the hunks of rock called the Falklands. No, the majority of the story is centred on Thatcher's marriage. This would be like focusing George W. Bush's story on Laura Bush. The film does not have a feminist bone in its body despite the fact that it is about Britain's first female prime minister.

Certainly Thatcher had a uterus, but it didn't soften her political approach. This was a woman who took milk from the mouths of school children and voted for the restoration of birching. Mrs. Thatcher was one mean old mama, deeply influenced by the men around her. From her dear old conservative daddy, to the political Svengalis who later shaped her political career, (most notably Airey Neave, who was Thatcher's campaign manager, and later blown apart in a car bombing attack), Thatcher was always a boy's girl. The one key figure the film leaves out is Winston Churchill, whom Thatcher worshipped and emulated more than any other. Thatcher was a child when Churchill's wartime speeches gripped the nation, and his version of what constituted Britain's great and glorious past informed a great deal of her later political approach.

The appalling facts of history have little place in the film's narrative as the majority of the story takes place in Thatcher's silver years of decline, when age and dementia have robbed the woman of her natural authority and left her wandering in time and space. Denis Thatcher, her long-dead husband has the unfortunate habit of popping up all over the place, and nattering his damn fool head off. Maggie's struggle with the onset of dementia is embodied in her struggle to get rid of the apparition of her dead hubby, an irritating conceit from the outset that only gets worse as the film goes on.

As Mrs. Thatcher shuffles back and forth her flat, in slippers and pale blue bathrobe, her past comes waltzing in, in old shoes and copies of The King and I. I lost faith in Meryl Streep a long while back, and this impersonation of Maggie Thatcher seems to share the same tics that characterized the actress's version of Julia Child. But even before the mind spins off, imagining the inestimable Julia Child in charge of world affairs, (which is a rather pleasant notion actually), something rankles deep down. It's not just the implication that Margaret Thatcher was a bad wife and mother, who favoured her son over her daughter, scarcely noticing when her husband decamped to South Africa, and favouring her own ambition over everything else. The film doesn’t even begin to tackler her racist, elitist ways. Let's not forget that Thatcher's government supported the Khmer Rouge, and opposed sanctions against South Africa during the apartheid years, among other things. The film version is an elderly lady washing teacups, laid low by time's great leveler. I refuse to feel sympathy for this fictional version.

If you would like a better indication of what British people think about Baroness Thatcher, watch this.

The difficulty in telling someone's life story is that it takes a lifetime. The film uses Thatcher's failing mind as a device to hop back and forth from the past to the present day, which starts to drive the viewer a little crazy after a while. An object, be it a teacup or a porcelain sculpture of British Marines taking back the Falklands, sends the old broad sweeping back through time to recount her glory days. But of course, glory is something of a suspect thing. Even Thatcher's saber rattling pinnacle, namely the war in the Falklands, seems more like a Gilbert and Sullivan production than a real conflict.

This is where the film gets oddly real, and in the strangest way possible. Like Churchill before her, Thatcher's version of what constituted Great Britain was a phantom. I have this on great authority, namely the superb British documentarian Adam Curtis, whose chapter on Thatcher was part of a much longer series on Western history called The Living Dead: Three Films about the Power of the Past.

The episode devoted to Mrs. Thatcher, entitled The Attic, used the idea of the attic apartment in number 10 Downing Street, where Thatcher lived, as a metaphor for the subconscious mind, and its habit of storing the junk and the relics of the past. Curtis uses this idea to underscore Thatcher's love for the ghosts and phantoms of British history that also informed Winston Churchill's version of his Island nation. Although he is described in the series as, "A dangerous fantasist," Churchill nevertheless came to convince an entire nation of the truth of his vision. The essential nugget at the centre of this is that this version of Britain only existed in the mind of the people who wished it so. As Curtis remarks in his film, in somewhat shocked tones, "It was only a dream!"

The Iron Lady is simply another fantasy pantomime of the past, which is perhaps the most truthful thing about it. But what are we ultimately to make, if anything, about the weird cultural amnesia that is enacted by films such as these? There is something more insidious taking place, and the failure of memory being suffered by the character of Thatcher is taking place on a much larger level. It is being enacted on a societal level. In fostering such an idealized and imagined past, like the kind that Thatcher and Churchill before her conceived for Great Britain, the question becomes, who benefits from this process?

Trace the money back, and find what's behind the rewriting of history, harsh, bitter, ugly fact replaced with a wash of sentiment and treacle. Cui Bono? (Who benefits?) Ed Vulliamy's recent piece in Harper's magazine says it best. The title is "Broken Britain: Nothing is left of the family silver."

Read it and don't weep, rage.