While people are still flooding the cinemas week in-week out to catch the latest flicks -- just check out the record-breaking numbers raked in last week by the final Harry Potter film -- something seems to be missing from the summer blockbuster these days. While action, drama and bone-rattling THX explosions are coming at us full-force as ever, there's been a distinct decline in the number of movie soundtrack singles stoking us before and after a screening. 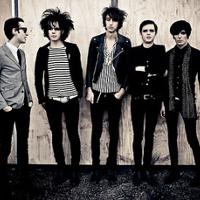 Just a cursory glance at the iTunes soundtrack section shows how the game has changed since the '80s were dominated by killer cuts like Kenny Loggins' "Danger Zone," from Top Gun, or Ray Parker Jr.'s "Ghostbusters," from, well, Ghostbusters. Today's soundtrack subscribers just aren't in it for a juicy new rock tune; they're in it for the film score. But while there's nothing wrong with sitting down to a nouveau-symphony masterpiece, when it comes to watching a beat-em-up popcorn flick, you really can't beat a back-drop of donnybrook rock riffs.

Take this year's batch of comic book-based films. This year we already got served dour and brooding soundtracks for Green Lantern, X-Men: First Class and Thor. With Thor in mind, Patrick Doyle's bombastic string arrangements set the scene for much of the fantastical flick. String sections screech and timpani boom throughout the battle scenes, but his symphonic strikes come across way too serious for the reasonably goofball plot. Despite Kenneth Branagh's directing job and the story's layers of familial deception, the film is hardly Shakespeare.

Just like the well-played, though obvious pun of using Black Sabbath's tune of the same name in the credits of Iron Man, imagine how juiced-up the ADD-set would have been at hearing Led Zeppelin's "Immigrant Song" blasting as Thor and co. went head to head with the frost giants in their land of ice and snow. For that matter, it would have been even better to have gotten an original, whip-crack anthem from oppressively heavy Norse-themed thrashers Amon Amarth.

There's a time and a place for enchanting, beautiful scores, and a superhero flick just ain't it. Though I can't remember where it plays in the film, I tie Nickelback main man Chad Kroeger's solo hit "Hero" to my memories of the first Spider-Man.

Questionable as the heavy-handed hard rock ballad may be -- I recall having a life-affirming conversation with a friend on a road-trip, only to have him grow cold and silent the second the song struck up on a mixtape I had made -- it still gets the job done. Between Kroeger's over-the-top testosterone croon, a wildly stomped-out wah-wah solo and its "believe in yourself" message, the song summed up Spidey's underdog vibe and left a bunch of bootcut jean and goatee-sporting brohams pumping one hand in the air in approval while wiping a tear away with the other. Magical, really.

Captain America: The First Avenger hits screens this week and judging by the tracklisting, there's nary a six-string solo to be found. Save for the showtune throwback "Star Spangled Man", as performed by the Star Spangled Singers, the bulk of Alan Silvestri's compositions for the ultra-patriotic picture get by on percussive military marches and epic, anthemic string work. Well, they can't all rock as hard as the Team America: World Police uber-banger, "America, Fuck Yeah."