Okay everyone, you can take the Canadian flags off of your car now, the party is over. Back to boring old reality, where people won't look you in the eye when you walk down the street, and everyone on public transit is surly, sour or obviously in some sort of late-stage psychosis. That's the Vancouver I know and occasionally like, not this starry-eyed, blessed-out, drunken party place where people touch you on the shoulder, offer to take your picture and compliment you on your hair. Who are these people? Are they really Canadian? Did this past two weeks really represent some new evolutionary manifestation of happy slappy Canuck identity or was it merely a passing fashion? 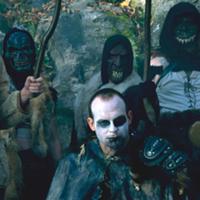 Canada 2.0, or perhaps more correctly Canada the brand. Whatever it really was, it freaked me out a little. The overwhelming red and white everywhere you looked was Orwellian after a while. Or as friend said the other day, "I'd like to see some other colours, I miss blue and green."

Other than making Canada into a logo, available for easy purchase, what was the point of all those flags draped everywhere? We Canadians laugh at the Yankee doodles when they wrap themselves up in their flag and tootle, "We're the greatest Nation on earth." Although, I don't think that refrain has quite the same ring that it once did. But when even newspaper columnists from Texas are saying you really ought to tone it down, you know it's time to put away your face paint and Canada cape and return to sober reality.

But... if you haven't taken off your Canada hoody yet and you're still in the mood for celebrating national pride, Vancouver's Pacific Cinematheque has some films for you. Canada's Top Ten begins March 3rd and runs until March 10th, 2010. It's a full on Canadian cinematic celebration that contains the good (Mary Walsh in Crackie), the bad (I still don't quite know what to think about The Trotksy) and the ugly (Polytechnique -- a good film about brutally ugly event).

The rest of the lineup is rounded out by Cairo Time, The Wild Hunt, Passenger Side, Defendor, La Donation, Carcasses and two different shorts programs. If you'd like some suggestions of what to go and see, I highly recommend The Wild Hunt and Passenger Side, but also do not miss Vive la Rose from Vancouver's Bruce Alcock, a truly lovely man who has made an exceptionally lovely film.

Watching the world roll by

Of this collection of film, Matthew Bissonnette's Passenger Side is curious because it is a Canadian film that takes place in L.A. At the recent Whistler Film Festival, Bissonnette talked about his adventures in getting money to make his film, including fielding questions from Canadian funders about why it had to be shot in L.A. and not Sudbury, for example. The audience laughed politely and knowingly in good film festival manner, a chuckle that says "Oh yes, we perfectly understand the dilemma of trying to make a film that is Canadian enough to get funding, but is still the film you want to make." Which is rather a lot for a chuckle, I suppose, but that's what I got out of it.

Passenger Side is a good example of this bind, since it is very much a Canadian film, filled with a sensibility that you will immediately recognize, shot in a landscape that is obviously not nearby. It is exactly this quality that the story is also about -- namely displacement, alienation, people who are cut adrift from a fundamental sense of connection and place, watching the scenery go by from a car window. Sudbury would have been an entirely different story, more Canadian in location perhaps, but not necessarily in spirit.

The story takes place over the course of one day. From the opening scene of a phone ringing and ringing in what looks like an empty apartment, the story takes its own sweet time. It will not be rushed. The man who finally answers the ringing phone is Michael, a would-be writer and ex-pat. The person on the other end of the line is Michael's younger brother Tobey (played by the director's actual brother Joel Bissonnette.) Of the two, Michael, looks far younger than the ravaged Tobey, who, it is gradually revealed, has had some rather large issues with drug addiction.

Petitioned to drive Tobey around L.A. on a series of mysterious errands that seem to mostly be about delivering packages to equally mysterious people, the pair set forth. As they meander along, bantering in brotherly fashion, the story begins to unfurl in elliptical fashion. I love a good car trip film, and this one is a dandy. As the brothers crisscross L.A., their car becomes the loci of many different types of encounters -- from the sexual (an awkward moment with a tranny hooker) to the altruistic (taking a young Mexican man to the hospital after he accidentally cuts off some of his fingers).

As the series of conversations, odd incidents, and seemingly random happenings begin to accumulate, the greater purpose behind Tobey's mission is gradually revealed. But Michael, too, is hiding a rather large mystery. Every time the brothers stop somewhere, Michael sneaks off the find a payphone. "A what?" you might ask. Increasingly an anachronism in contemporary L.A., the humble payphone is the thin fragile line of communication between Michael and the woman he confesses to love. The fact that his phone calls are never answered may tell you something.

A cooler side of Canada

Connection is a difficult thing, but also inescapable. The brothers, for all their bickering and carping, are united in this foreign place by the fact that they share a set of particularities that you can call Canadian for lack of a better term. Like family, nationality is as much about familiarity and recognition as it is bonding over a love of hockey and other fragile bits of culture and ephemera. In the case of Tobey and Michael, their degree of foreignness is enough to bring on the hatred of a gas station attendant who claims to hate Canadians.

You never feel as Canadian as when you are not actually in Canada. That's the thing I liked most about Passenger Side. It does not force anything, but rather allows it to reveal itself, in its own sweet time. It possesses a reserve, a wry humour, an intelligence, and a type of good-natured dyspepsia that made me feel instantly at home. These are only some of the essential things that I think of being common to this place we live in. They are as familiar as the maple leaf, and just as lovely.

To try and draw some sort of commonality between the films in Canada's Top Ten is a bit of fool's errand. The only thing they share is a certain geographical location. But even that isn't really useful, since there are as many manifestations of Canadian identity on display here as there are hosers sitting in lawn chairs drinking beer across this big old country. But even if you weren't tired enough of it already, collecting Canadian stories in one place begs the tired old question of what it means to be Canadian. If you watch all 10 of Canada's Top Ten you may arrive at the answer that being Canadian basically means whatever you want it to mean. Beyond the colour-blocked simplicity of our flag lies an entire rainbow nation of complex hues, tonal shades, gradations and sweet subtleties. Bitter blacks, ashen gray, the burnt umber of the desert, and yes, the deep blue green of the forest at night -- it's a goddamn colourful cultural mosaic.

Now that nationalist fever is breaking, leaving Canadians weak, sweaty, and a little nauseated, the movie theatre is an excellent place to be. It's dark, quiet, and there are plenty of snacks and a nearby washroom. When one emerges blinking in the pale spring sunlight, the country in all its colourful complication and complexity will be waiting.