Cool temperatures and a steady rainfall make B.C.’s coastal regions — extending from Burns Bog in North Delta to Drizzle Lake on Haida Gwaii — the region’s peatland hotspots. Often covered in a blanket of sphagnum mosses, some of the province’s peat deposits are more than four metres deep.

Unlike other parts of the country, B.C.’s peatlands house species like cedar and hemlock in addition to the more classic bog stalwarts like Labrador tea and bog cranberry. To learn more, read Hakai Magazine’s "The Secret World of Bog."

When record-breaking wildfires in western Russia killed 65 people, injured 1,068, destroyed 3,500 homes and caused billions in damages in 2010, it was no longer business-as-usual in Russia’s response to the impacts of climate change.

Not only did the Russian government begin investing more in traditional fire suppression, fire science and prevention strategies, it also began, with financial help and expertise from Germany, to restore peatlands that had been badly degraded by agricultural developments and the mining of peat to produce energy for household use and power plants. A fifth of Russia is covered in peat, mostly the northeastern side of the country.

Peat is partially decomposed plant material that builds up over centuries in cool, swampy, waterlogged conditions such as bogs and fens and, to a lesser extent, swamps and marshes. Representing just three per cent of the Earth’s landscape, peatlands like those in the Hudson Bay Lowlands can store five times more carbon than the Amazon rainforest. Collectively, they store twice as much as carbon than all of the world’s forests.

They also play an outsized role in filtering water and mitigating floods, drought and wildfires, such as those that loomed large in British Columbia this year. Had a large fen near Fort McMurray not been drained in the 2000s, it might have slowed the 2016 Horse River fire long enough for firefighters to gain control of it and avoid the evacuation of 88,000 people, according to Sophie Wilkinson, a peatland scientist at McMaster University.

Canada, endowed with more pristine peatland than any other country, has a unique opportunity to preserve and in some cases restore these ecosystems found on the tundra, in temperate and boreal forests, and in the Rockies and the Great Lakes region such as Georgian Bay.

Not only do they play an oversized role in managing climate change, regulating water and protecting critically endangered species such as caribou and whooping cranes, they offer denning sites for polar bears, turtles and Massasauga rattlesnakes. They also nurture many of the 546 plants that Indigenous people use for medicine.

Russia and Germany are not the only countries investing heavily in peatland restoration. China has successfully done this in the Zoigê Plateau, the most extensive mountain peatland in the world, after 700 kilometres of drainage ditches were dug in the 1960s and 1970s to provide more grazing for yaks. The restored fens — a type of peat-accumulating wetland — now filter and store freshwater for tens of millions of people.

In the United States, the Fish and Wildlife Service is rewetting badly degraded peatlands in the Great Dismal Swamp, a protected peatland on the border of North Carolina and Virginia, and Pocosin Lakes National Wildlife Refuge in North Carolina, to mitigate wildfires and floods and to keep carbon in the ground.

The U.K. and other European countries are doing the same to restore biodiversity and to meet their climate change goals. The sale of horticultural peat that is extracted from bogs and fens will be banned in Great Britain in 2024.

Canada has been slow to recognize the many virtues of peatlands. Oilsands operators continue to drain and clear them to extract bitumen. Hydro projects like Muskrat Falls flood or disturb them with cutlines. Mining companies, like the 18 that have 1,300 claims in Ontario’s so-called “Ring of Fire” in the Hudson and James Bay Lowlands, will dig them up and build roads through them if their developments go ahead. And cities like Calgary have drained peatlands to make way for urban developments.

Calgary recognized this mistake. It paid the price in 2013 when an epic rain-on-snow event in the Rockies sent a wall of water downstream. The worst flood in Canadian history may have been mitigated had there been peat to sop up some of the water. Sphagnum, one of many mosses that are the foundation of peat, holds 15 to 26 per cent of its weight in moisture, according to John Pomeroy, Canada Research Chair in Water Resources and Climate Change from the University of Saskatchewan.

But that flood would have been even worse had the beaver-managed Sibbald Fen and adjoining forest in Kananaskis country been degraded, as the southwestern Rockies may be if coal developments there are allowed to move forward. In interviews for my book Swamplands, Pomeroy and his colleague Cherie Westbrook have underscored the need to protect alpine fens and forests.

While other countries, including the U.S. and the Republic of Congo, have mapped out their peatlands, Canada has not. The limited information makes it difficult to protect them.

Peatland mapping has produced some surprising results, including the discovery of 14 million hectares of tropical peatland in the Congo basin in 2017.

In each case, the distinct nature of these mountain fens play an oversized role in supporting insects, plants and animals and in storing water and carbon. Small peatlands such as the 18 inventoried in Wyoming contain 32 threatened plant species, four of which are found nowhere else in the state.

Over the past two decades, David Cooper, a wetland and riparian ecologist from Colorado state has, along with colleagues, identified thousands of high elevation fens that were previously unknown or unappreciated for what they were. The numbers in some cases are mind-boggling.

In the 2000s, 1,738 fens covering 11,034 acres were identified in the Grand Mesa, Uncompahgre and Gunnison National Forests. Ninety per cent of these fens were found at elevations ranging from 2,700 to 3,600 metres. Cooper estimates there are more than 2,000 fens in the San Juan mountains alone, ranging in size from 0.2 to 20.5 hectares.

No one knows how many fens there are on the Canadian side of the Rockies because no one, including Parks Canada, has looked as closely.

Many scientists continue to underestimate the virtues of peatland ecosystems because of the dearth of plant and animal species. This is true if you compare the peat-rich boreal forest region to the Amazon rainforest. But it is a false slight for all the other ecosystem services that peatlands offer. 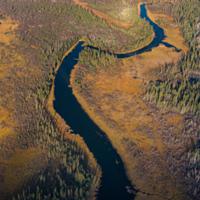 What the Teck Mine Will Destroy

One to three billion birds fly north to the boreal peatlands of North America each spring to breed, resulting in three to five billion of them migrating back in fall.

Scientists like Mike Waddington at McMaster University, Line Rochefort at Laval University and Jonathan Price at the University of Waterloo, have the expertise to restore Canada’s peatlands. David Cooper is helping, as is Dale Vitt, a former University of Alberta botanist who pioneered the art of restoring peatlands. Yet their numbers are few, as are their funding sources.

If Canada wants to change course, it needs to catch up with what the rest of the world is doing in restoring and protecting peatlands. Thirty per cent of the world’s soil carbon stock is found in the world’s peatlands. Canada contains a quarter of that — 150 billion tonnes that are still in the ground.