In a tense meeting of the Green Party of Canada’s national council on Tuesday, it was decided that the leadership of Annamie Paul will be put to a formal review vote on July 20, if the leader does not publicly repudiate statements by a former senior advisor, Noah Zatzman, and “explicitly support” the Green party caucus. As of this morning, no statement has come from the Green leader.

The move comes less than a year after Paul became the first woman of colour to win the leadership of a federal party.*

In the wake of last night’s meeting, two members of the national council resigned, both from the Maritime region. In practical terms, that will make it more difficult to get the necessary three-quarters vote majority on July 20 to recommend ousting the leader under the party’s constitution. Such a vote would be a huge blow to Paul, though the national council cannot unilaterally remove the leader via a vote of no confidence.

Last night’s meeting was preceded by an hour and 45 minute meeting between the leader Paul and former leader Elizabeth May, that did not go well. May was reportedly told that unless she supported the leader 100 per cent at national council, there would be consequences.

May attended only part of the national council meeting and left before the vote was taken.

Sources close to the situation worry that if Paul is removed, it could mire the party in accusations of racism and anti-semitism based on her experiences as leader. That kind of caustic debate on highly-sensitive matters could easily sink any hope the party might have of gaining more seats at the next election, which could come as early as fall.

Under the party’s constitution, Paul had to be provided with the written case in favour of reviewing her leadership. Sources who have seen that document told The Tyee that it was poorly done.

Paul’s troubles began when her former senior advisor Noah Zatzman attacked members of the Green party’s three-person caucus over criticism of Israel’s government, vowing to work to get them defeated. Green MPs Jenica Atwin and Paul Manly had stood up for Palestinian rights after Israel’s evictions of Palestinians in East Jerusalem, and subsequent heavy bombing in Gaza that killed 67 children under the age of 18. Zatzman’s outburst eventually triggered New Brunswick MP Atwin to leave the Green caucus and cross the floor to sit with the Liberals.

Paul’s version of Atwin’s defection is that the dispute over the Israel-Palestine issue was merely a “manufactured” reason to justify something that had been in the works before that policy dispute.

The two remaining members of the Green caucus, Manly and May, have spearheaded an attempt to convince Atwin to return to the Greens. Part of that process would entail an apology from the leader to both Atwin and Manly for the attack they endured from Zatzman. So far, Paul has eschewed that option.

Zatzman, meanwhile, is ending his paid role as advisor to Paul, his contract not renewed.

With speculation mounting that May and Manly could be the next MPs to abandon the Green party, the two MPs recently put out a statement making it clear that they have no intention of leaving the Greens. 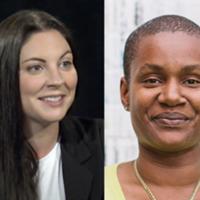 The principal beneficiary of the very public feud going on in the Green party is the Liberal Party of Canada. It could make it easier for the Liberals to hold Toronto-Centre where Paul is trying to win a seat in Parliament, and gain Atwin’s New Brunswick riding if she can retain the seat as a Liberal.

Should the national council vote by a three-quarter majority on July 20 to review Paul’s leadership, the actual review would be conducted by all Green party members at a general meeting already planned for August.

Should Paul be removed at that time, the Green party would be faced with coming up with an interim leader who could unite the party in short order, and be ready to perform in both the English and French debates should Justin Trudeau call an election.

*Story updated on June 16 at 7:35 a.m. to correct erroneous reporting based on preliminary information coming out of the marathon meeting as vote counts were underway.

*Story updated on June 16 at 9:40 a.m. to correct that it has been less than a year since Annamie Paul won the leadership of the federal Green party, not a year and a half.