When you grow up in an urban setting, you never have to worry about water. I never did until I turned 18. It always poured abundantly from the faucet — for washing dishes, for making juice, for cooking. The water was always there.

I grew up off-reserve in Thunder Bay and was never taught that I couldn’t drink the water. I never had to worry about whether it would give me skin problems or make me sick.

I’d visited my remote fly-in community of Eabametoong First Nation many times. But I was young and never thought too deeply about why I couldn’t drink from the tap like I did at my mother’s house in the city.

Eabametoong, located 360 kilometres northeast of Thunder Bay, has two locally-owned stores where the community shops for food or other necessities. It is surrounded by many bodies of water where people go out to fish or travel to their families’ traplines.

When I moved back there at 18, officially an adult, the harsh reality hit me. The water was still not safe to drink. Eabametoong First Nation has been on a boil water advisory since August 2001 — it came into effect when I was just four years old.

Lately, my home community has been on my mind as I recently read reports that the Canadian government had missed its own deadline to end all boil-water advisories on First Nations reserves. I imagined the extra pandemic risks that came with a lack of clean, safe water.

I wanted to find out if there was anything being done about this clear violation of basic human rights.

So I called Andy Yesno, current senior advisor for Eabametoong, who I met during my work with the Reversing River Youth Council. The council was founded by me and other youth in Eabametoong and has been officially recognized by the community as a voice for its young people.

Yesno has worked for Eabametoong for 45 years, serving as the Chief and on council. He is one of the most knowledgeable people around — he was once an electrician and knows so much about the treaties, government and, of course, the water issue in our community.

Water problems have plagued Eabametoong for years. The water would get shut off from time to time because of problems with the treatment plant. When water use rose, the inadequate sewer system would overflow, creating a health risk. In 2019, the nation declared a state of emergency over the water supply problems.

“It complicates things,” Yesno said, because when there is no running water, you can’t do everyday chores or maintain a normal life.

A new $12-million water plant, supposedly completed in 2019, was intended to end the boil water advisories. But the plant has many deficiencies because the community says its design is still inadequate.

The community now relies on reverse osmosis systems to provide filtered drinking and cooking water for the approximately 1,300 residents. Yesno says there are three reverse osmosis units, and people have to take water jugs to refill every time their household runs out.

Community members buy bottled water as well, but it is expensive, as it has to be flown in and is resold at a very high price. From my own experience, cases of bottled water can cost $25 or more at the local stores.

Water should not be this expensive. It is a basic human necessity. The lack of readily available, safe water creates health risks and adds costs and work to daily life — especially for families with babies or for Elders. There are times when bottled water has been shipped into the community from organizations like Matawa First Nations Management, a non-profit tribal council that serves nine communities from Treaty 9 and the Robinson-Superior Treaty.

There have been times when the water plant would have to shut down for a few hours, occasionally for days at a time, leaving everyone without running water. People would fetch lake water to flush toilets or for daily chores.

Every time it’s announced on the local radio station that the water will be shut off, households fill up their bathtub with water for everyday use.

“The infrastructure here is getting old,” Yesno tells me. The water and sewer system can back up fairly easily, so it has to be flushed out and cleaned out properly.

Before the new treatment plant can begin fully operating, the water will have to be tested to meet the standards set by Ontario water regulations. Yesno says the design of the plant is still not right and needs improvement.

“We will not allow the boil water advisory to be lifted until the new water treatment plant is fixed and is ready to be used,” he says.

“Nothing has changed in the past 20 years,” he added. “We would like to have clean water for the health and safety of our community.”

I first learned how common boil water advisories are when I worked as youth representative for different Indigenous organizations, and even more so when I was attending Aboriginal studies at my college.

In school, I explored more about the issues surrounding water in Indigenous communities. It frustrated me to learn that there were 52 long-term advisories in effect as of last month. Many of those advisories have been in effect for years, including for my community.

Canada is a first world country, with Indigenous populations and communities having to live under boil water advisories, with some children and youth never having had access to clean drinking water in their entire lives.

In the 2015 election campaign, Prime Minister Justin Trudeau vowed to lift all boil-water advisories by 2020. It is now 2021, and yet there are still these 52 advisories affecting 33 communities that don’t have access to clean drinking water.

There is no new target date for the government to keep its six-year-old promise. Communities need the proper infrastructure and funding now to be able to have clean water for the current members and future generations as well.

A class action litigation has been announced on behalf of the Tataskweyak Cree Nation, Curve Lake First Nation and Neskantaga First Nation against the attorney general of Canada for failing to address drinking water advisories on First Nation reserves across the country. 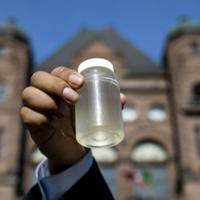 This could push the government to act faster on its obligation to ensure clean drinking water is available for Indigenous communities. But the fact that communities are still suffering and having to fight for their rights is unnecessary. It should’ve ever have happened.

Being able to live in my community for a time was a true eyeopener. I realized that growing up I took water for granted by not appreciating it as much as I should. Many communities, like mine, have been living in those conditions for years, and a generation has grown up without ever having access to clean water.

When I moved to Ottawa for school, I cherished the fact that I was able to drink from the tap, because after living in my community and educating myself about the issues, I had a better understanding of what water means to me.

Water is taken for granted by those who don’t know about this human rights violation that Indigenous people from communities affected live with every day. It is time to do better, Canada.