Plenty of headlines lately note how far Canada lags behind the United States in vaccinations. But guess what? We now are outpacing Germany even though the Pfizer vaccine is actually made there.

How could that be? After all, we don’t manufacture any vaccine in this country and depend on multinational corporations to determine our supply.

To date 20 per cent of the Canadian population has now been jabbed, and that number is growing steeply.

But that figure would be much lower — say 10 per cent — if it hadn’t been for some out of the box thinking spearheaded by British Columbia’s Centre for Disease Control.

Some call it “off label vaccine dosing.” It all started at the beginning of March. That’s when Dr. Bonnie Henry, B.C.’s provincial health officer, made a critical public health decision that has had both national and international implications.

To cover more ground with limited vaccines, and to save more lives, she endorsed a policy of delaying the second dose by four months. (Three of the four vaccines currently approved in Canada are based on two-dose regimens between 21 and 28 days.)

A couple of days later the National Advisory Committee on Immunization strongly recommended that the rest of the country follow suit. Surprisingly, they did.

As researchers at B.C.’s Royal Columbian Hospital later put it: “While there are no large clinical trial published data to guide prolonged delays of the second dose, there are data to suggest that delaying the second dose likely preserves the long-term boost in immunity without an unacceptable decrease in immunity in the intervening period between doses.”

The delayed second dose strategy shows what can happen when public health officials act fast and imaginatively in pursuit of the public good, and deserves notice amidst the fair criticism Canada’s overall pandemic response has drawn.

Here is how B.C.’s CDC explained Henry’s big decision: “At this point in the epidemic, when we have only protected a small proportion of the population, providing a first dose to as many people as possible will save more lives and avoid more cases and hospitalisations than providing a second dose to a smaller number of people.”

The province based its controversial move on several prongs of imperfect evidence.

In other words one shot delivered a wallop of protection. Similar data from Quebec confirmed B.C.’s results. Studies from Israel and the U.K. reached the same conclusions.

Second, Dr. Danuta Skowronski, B.C. Centre for Disease Control epidemiologist and expert on vaccine effectiveness, made an interesting discovery. Both Moderna and Pfizer-BioNTech structured their clinical trials on three to four week intervals between doses in order to get the vaccines to market as fast as possible.

But while parsing the data on vaccine efficacy submitted to the U.S. Food and Drug Administration, Skowronski found that both companies had underestimated the effectiveness of their mRNA vaccines after the first dose.

Skowronski’s analysis found that both vaccines were nearly 90 per cent effective at stopping infection with just one dose.

“With such a highly protective first dose, the benefits derived from a scarce supply of vaccine could be maximized by deferring second doses until all priority group members are offered at least one dose,” she wrote in The New England Journal of Medicine on Feb. 17.

“There may be uncertainty about the duration of protection with a single dose, but the administration of a second dose within one month after the first, as recommended, provides little added benefit in the short term, while high-risk persons who could have received a first dose with that vaccine supply are left completely unprotected.”

A study by The Lancet on AstraZeneca vaccine also indicated that delaying the second dose for three months actually boosted vaccine efficacy from 55 per cent to 81 per cent. That’s not an unusual finding in vaccine studies. They typically show that that longer the interval between vaccine doses, the better the immune protection.

At first B.C.’s decision to delay the second dose was roundly criticized. Canada’s chief scientist Mona Nemer, for example, called it “a population level experiment.” That’s true. Only the U.K. and Canada have so far delayed doses on such a large scale.

Others argued that Canada should conservatively follow the clinical trial labels which promised a wildly successful vaccination efficacy with two doses separated by a three to four week interval.

But an editorial by a group of prominent scientists countered with a powerful argument.

One dose of Pfizer confers 85 per cent protection while two doses delivers up to 95 protection against COVID-19, they noted.

“Does it makes sense to provide a second dose of vaccine to increase protection from 85 per cent to 95 per cent, while leaving an equal number of people with zero protection?” they asked.

No, it does not. The rapid rise of the variants, as the editorial added, further also supported a delayed dose policy because it simply doubled the number of Canadians that can be protected. And that delayed dose policy now explains why Canada’s vaccine numbers are now surging.

Are there risks to a delayed dose strategy? Absolutely.

A variant could punch a hole through a single dosed population as the virus continues to evolve under the pressure of vaccination.

A single dose of Pfizer and Moderna, for example, does not do as well against the South African variant B1351 as they do against other variants. And yes, we may well be battling “escape variants” that can elude vaccine immunity altogether in the fall.

However the greatest risks largely accrue to 80-year-olds and immuno-compromised citizens — cancer patients, for example. They need to get that second dose on schedule to solidly protect their health and prevent new variants. In most Canadian provinces these folks have been omitted from the one dose plan.

In sum a delayed second dose strategy for the general population represents something we haven’t seen a lot of during this pandemic: a bold move that respects the speed of the virus; the depth of the emergency and the whole purpose of public health: preventing disease.

Last year Mike Ryan, one of the World Health Organization’s bright lights, explained what works against a novel virus: “Be fast. Have no regrets. You must be the first mover. The virus will always get you if you don’t move quickly.”

He added that “If you need to be right before you move, you will never win. Perfection is the enemy of the good when it comes to emergency management.” 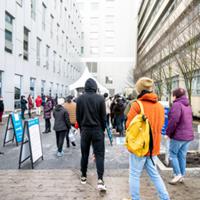 So, a delayed dose strategy is not perfection. Nor is it ideal. But it is the right response at the right time. And it has saved lives and just may dent the surge in variants that our politicians welcomed with their yo-yo open-close measures and porous borders.

It also has other benefits: “Reducing case numbers protects everyone, even those who need a second dose for a better individual immunogenic response,” recently tweeted Gerald Evans, an infectious disease expert at Queens University.

The delayed dose strategy is also the kind of thinking we are going to need more of if we are to get out of this mess because vaccines can’t do that alone. We will need effective public health measures — yes, masks and distancing and tight border controls — along with more quick creative thinking.

The best evidence now suggests that we can get the biggest bang from our one dose strategy by concentrating our vaccine efforts towards those people most susceptible to infections: young and immigrant populations doing essential face-to-face work. Let’s do that, and fast.