In an article published Friday in the Globe and Mail, national affairs columnist Gary Mason accused Wet’suwet’en hereditary chiefs of holding “proprietary ownership” over an agreement signed last year between the traditional leadership and federal and provincial governments.

“Many across the Wet’suwet’en Nation, including elected chiefs, still don’t know exactly what the memorandum of understanding that was agreed upon on Feb. 29 of last year says,” Mason laments, accusing the chiefs of hoarding the information.

But a Google search quickly reveals a copy of the document posted on the B.C. government website.

It also appears Mason didn’t turn to anyone actually working on the negotiations, which are aimed at defining the nation’s rights and title.

And it only serves to further divide.

Mason says the Coastal GasLink pipeline currently under construction through Wet’suwet’en territory created “a nasty feud” that “pitted” traditional Wet’suwet’en leadership against the nation’s elected chiefs, a classically polarized description of a community that, like any, is so much more complex.

As if a pipeline could draw such a neat and tidy line.

Instead, some Wet’suwet’en Nation members are strongly in favour, some strongly against, and many have mixed and conflicting feelings. They find themselves torn, balancing the pipeline’s effects on families, the environment, communities and the economy. Some struggle to deal with the pipeline in positions on one or both of the nation’s parallel governance systems.

In its insistence on oversimplifying, media coverage consistently puts a western lens on Indigenous politics, often conflating elected-versus-hereditary systems with democracy-versus-monarchy. From that perspective, democracy is always framed as superior.

But while pundits and politicians like to refer to hereditary names and positions as a “birth right,” they are anything but — they are granted on merit and involve many years of training in culture and tradition. They can be revoked if traditions aren’t followed.

In addition, the two governance systems are not mutually exclusive. Just as hereditary chiefs can be elected to reserve councils, there is nothing stopping an elected chief from inheriting a traditional name and taking on the responsibilities of a hereditary chief.

The narrative that pits hereditary versus elected systems ignores the fact that elected officials are also clan members, who are consulted by hereditary chiefs on the nation’s business through the feast system.

Those clan meetings to consult on the memorandum of understanding began a year ago but, like other traditional gatherings — funerals top among them — the ability to conduct traditional Wet’suwet’en business is largely on hold due to the pandemic.

Saying, as Mason does, that the agreement “cut elected chiefs out of the picture and made their hereditary counterparts supreme” further reduces the nation to absolutes.

Mason also says that the feds and the province “have decided, for whatever reason, to give the hereditary chiefs the last word on anything to do with this tentative agreement and on efforts to shape an everlasting one.”

There are, in fact, several reasons. 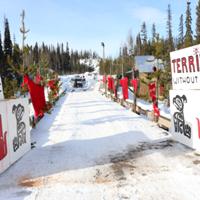 Politicians and Columnists Still Don’t Seem to Get the Wet’suwet’en Crisis, so Let’s Review

Because in the 10-year Delgamuukw-Gisdsy’wa court case, which ultimately led to the Supreme Court of Canada recognizing the nation’s rights and title in 1997, the plaintiffs deliberately used hereditary names to represent the role of traditional governance over the territory.

Because B.C.’s Declaration on the Rights of Indigenous Peoples Act recognizes First Nations’ right to self-government.

Because elected band councils are a construct of the colonial government and have jurisdiction only over reserves, which make up a small portion of Wet’suwet’en territory.

Governing those reserves is no easy task. Elected chiefs have the challenging work of creating infrastructure and employment opportunities in often-remote First Nations communities. Inviting resource development is one obvious way to do that.

Wet’suwet’en, BC and Ottawa Move Forward on Land Rights and Title

Impact-benefit agreements like those signed by five of the six Wet’suwet’en band councils offer much-needed funds promised by large-scale developments like the Coastal GasLink project. They may — but don’t necessarily — signal support for a project.

Anything that could impact a band’s ability to attract industry could also impact its ability to govern effectively. To that end, it may be entirely appropriate for band chiefs to have an elevated role in the discussions.

Ultimately, that’s up to the nation to decide.

The fact is, the memorandum of understanding and the negotiations that followed are a continuation of the hard-fought court battle won nearly a quarter-century ago by hereditary chiefs, a victory ignored until the relationship between the Wet’suwet’en, federal and provincial governments hit a breaking point last year.

Mason’s column imagines an “ugly imbroglio” in the nation, one he appears to be congratulating himself for predicting.

But really, it’s just another example of superficial media coverage of complex issues in Indigenous nations.