With very little media attention, a report was recently published that makes the COVID-19 pandemic look trivial by comparison.

On Feb. 9, the journal Environmental Research published a study conducted by three British universities and Harvard, titled “Global mortality from outdoor fine particle pollution generated by fossil fuel combustion: Result from GEOS-Chem.” While it seems like just another research article, its findings call into question the whole economic and political foundations of modern civilization.

Of course, the pandemic isn’t really trivial. On Feb. 9, the day this report appeared, Johns Hopkins University reported 106,826 new cases and 15,592 deaths. We are rapidly approaching 110 million cases and 2.4 million deaths in little over one year since the first case of “pneumonia” in Wuhan.

The global-mortality study deals with problems long known and long ignored. But the authors of this report force us to a new understanding of ourselves. We may well reject such an understanding, because it will demand a social transformation beyond mere reforms, and we have invested a great deal in a status quo that is killing us.

Like hundreds of other studies, the report looks at the health effects of air pollution, but it breaks out a specific component of that pollution: the fossil fuels we use to run our economy. When we burn them, we don’t just emit carbon dioxide; we also create PM 2.5, tiny particles just 2.5 microns wide. When we breathe such particles, they can move deep into our lungs, slowly crippling them, while also aggravating conditions like asthma and heart disease. PM 2.5 doesn’t often kill rapidly, but it is in no hurry.

Using 2012 as a typical year when no El Niño skewed the results, the study found a shocking result: “We estimate a global total of 10.2... million premature deaths annually attributable to the fossil-fuel component of PM 2.5.” But since 2012 China has greatly reduced its emissions, so by 2018 the global death toll was just 8.7 million.

So in 2018, even after China’s unilateral emissions reduction, fossil fuels still killed over three times as many people as have died in one year from COVID-19. They killed about the same number again in 2019, and perhaps a bit fewer in 2020 as fossil-fuel consumption declined. And as the economy recovers, another eight million or so will die in 2021. And 2022. And 2023.

It would be tempting to escape through “whataboutism”: What about China? Even after reducing its emissions, it still lost 2.4 million people prematurely in 2018. What about India, which lost about the same number of people? We might argue that when those countries clean up their act, we’ll clean up our own. But we’d be kidding (and killing) ourselves.

Federally and provincially, our governments must understand that they are killing thousands of their own citizens by subsidizing fossil fuels and the industries that run on them. They outsource even more deaths to Asia through coal from Roberts Bank and, soon, liquid natural gas from Prince Rupert and bitumen from Burnaby. Alberta Premier Jason Kenney wants to turn the Rockies into open-pit coal mines. It will all be burned, killing some in the short term through PM2.5, and killing others by pumping still more carbon dioxide into the atmosphere to power still more global heating.

Canada has a civil service full of highly-educated people who must understand this very well. No doubt they have advised their political masters of the carnage. But the politicians they serve seem to live like many of their voters, from paycheque to paycheque: the voters can’t see beyond next month’s bills and politicians can’t see beyond the next election. Justin Trudeau, Kenney, John Horgan and the others know that the very people who vote for them are being killed before their time, and some are losing their kids, by policies that support fossil fuels. 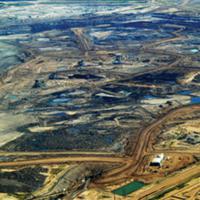 Why Scientists Are Amazed at Oilsands Smog Levels

But Trudeau and Horgan and Kenney can’t find the words to explain the situation, much less to offer a solution. How could they? “We’re sorry, but we seem to have been making you sick and killing you when we thought we were just making sure you had a job. It’s all been a terrible misunderstanding.”

And the misunderstanding doesn’t apply only to the oil patch. Our cities are designed for automobiles, not their drivers, and we densify our neighbourhoods by putting townhouses right next to high-traffic roads. We dream of an end to the pandemic when we can once again go trekking in Nepal or partying in Bali or cruising to Alaska.

We scorn ancient civilizations that sacrificed human beings to please their gods and ensure the prosperity of their society. Some even fought wars to capture more people to sacrifice.

But we do just the same. Whether we live under the capitalism of the neoliberal “Free World,” or the “socialism with Chinese characteristics” that currently challenges us for domination, we kill one another to persuade our gods to grant us continued prosperity.