[Editor’s note: As we look back on a year of living with COVID-19 in our midst, Tyee writers each day share ways in which the coronavirus defied their expectations about science, politics and human nature.]

When pandemic anxiety began to spread earlier this year, it revealed a hidden secret: Many of you hanker for a simpler life.

I get it. It’s a survival thing. When existential doubts arise, we long for wide-open spaces. We want to be self-sufficient. It’s not enough to bake your own bread and plant a garden — you want to grow your own wheat and grind your own flour, too.

In northern B.C. where I live, for just a moment the real estate market balked. Then it surged. Over the summer, house sales were up nearly 20 per cent across the region over last year. Realtors were presenting a fist-full of offers in one sitting. If you weren’t willing to pay five per cent above asking, were you even serious about buying a house?

We talk about this in hushed tones around the friend who lives in our garage in Smithers. For the past year, after returning to the valley following a stint away, he’s been trying to settle into his own northern nest but has been shut out of the market. (He declined to be interviewed for this article, morally opposed to anything that might further raise awareness and thus lower his odds.)

The thing is, in a pandemic, there’s a lot that’s attractive about country living. Easy access to the outdoors for both exercising and socializing in a COVID-friendly way. This fall, our local Nordic centre sold a record 1,000 season’s passes. And if you’re thinking about buying a new mountain bike for spring, better pay your deposit now — suppliers are already selling out.

Suddenly, people were sent home to work, and home could be anywhere. For many, it felt like the right time to jump on that long-held desire to live in a small mountain town. Not to mention, you can buy a house and acreage here for less than a one-bedroom condo in Vancouver.

For one friend, COVID-19 forced the move to Smithers. Her family had been planning to leave the city anyway, but when the pandemic hit, job prospects fell through. They decided to spend the summer in a travel trailer on her mom’s rural property.

“As the world became more and more unpredictable and measures around COVID-19 were getting more intense in April, we decided that living somewhere rural, that was also close to family, was a good move,” she says.

They are now making plans to build a home here.

“We have come to love Smithers and want to stay,” she tells me. “As the world moved towards a reality in which it seemed we would be forced to become more distant with most people and many things that made city life attractive began evaporating, a small town in which we had family and where the mountains are as beautiful as here became ever more attractive.”

But not everyone will stay. 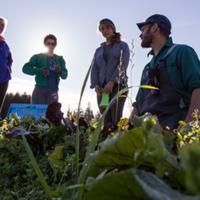 A Dozen Local Food Heroes on What a Pandemic Teaches

The reality is, that country laneway will look less romantic when it comes time to shovel it. Rolling lawns? They don’t mow themselves. Old houses need renos and building new ones never seems to end — take long enough and you might find yourself in the unenviable position of starting renos before all your trim is up. (Insert side-eyed glance at husband.)

Others will find themselves embedded, drawn into small-town-living’s best asset: community. They’ll volunteer at the summer music festival and enter homemade jams in the fall fair. Without even trying, they’ll become entrenched. They’ll invest in designer gumboots and a ride-on-mower-snowblower and make a go of country living.

Those who never find that anchor will drift back toward the city, to career opportunities and the friends and family they left behind. They’ll take with them memories of time spent in the north and leave behind their houses, sold for a small profit.

Then maybe I’ll get my garage back.