So much for bending the curve. That national policy has failed.

What Canada needs now is an old-fashioned debate about pursuing a radically different national strategy on COVID-19 — one that dares to believe we can actually eliminate the virus within our borders and then takes the required steps.

That’s the message of an important new study saying Canada is well positioned to succeed if it tries.

The dismal fruits of our current national approach, which largely consists of waiting for a vaccine and providing funds for the provinces, are now self-evident.

As the second wave sweeps the country, several provinces have ignored the threat of exponential growth — all to protect economies that a coronavirus flood could soon leave in tatters.

A nation that committed $4 billion to be able to conduct 200,000 tests a day still struggles to do half that.

The study by the NGO Global Canada Initiative titled “The TANZANC Model And Zero COVID Transmission: A Better Strategy for Canada?” offers a proven alternative to this miasma.

It notes that four democratic jurisdictions, Taiwan, Australia, New Zealand and Atlantic Canada and the North, have effectively wrestled COVID-19 to the ground and escaped the pandemic rut as well as the second wave.

What they share in common is a central belief it could be done, and commitment to see it through.

The study dubs them the TANZANC Model.

Four pandemic beaters, one in Canada

Start with Canada’s little-heralded Atlantic bubble and the North which “presently operate a successful zero COVID policy across 45 per cent of Canada’s territory and with seven per cent of its population (some 2.6 million people).”

Maritimers proved that living without COVID-19 can be done by controlling borders, engaging citizens and smart application of testing and tracing, something many parts of Canada are still struggling with.

After eliminating the virus in early July, the provinces of New Brunswick, Nova Scotia, Prince Edward Island and Newfoundland and Labrador formed a larger bubble that has maintained close to zero transmissions with strict quarantines for all incomers.

The Maritimes, a region with intense civic pride, happens to have the oldest population in Canada.

Its bubble is a roaring success story. “In the eight months since March, Atlantic Canada’s COVID case performance has been three times lower than the next best region in Canada: British Columbia.”

Why has Canada ignored its own successful Atlantic model? University of Ottawa health expert Amir Attaran offers a blunt answer: “There is a conceit in the West and Central Canada that dumb Maritimers could not solve any problem. That’s why the success has been ignored.”

In Nunavut, where Inuit people are 300 times more likely to suffer from TB than white Canadians, the government honoured its pandemic-fighting motto: “Decisive in our approach, cautious in our choices.”

Non-residents are not welcome and residents wanting to return must quarantine in “self-isolation hubs” in Winnipeg, Ottawa, Yellowknife or Edmonton. Nunavut had zero cases until Nov. 6 and now is battling an outbreak in the hamlet of Arviat.

Taiwan, a nation of 24 million, moved quickly with testing, tracing, masks and other interventions to quash the virus. Because it acted rapidly, it didn’t require lockdowns.

After imposing a severe lockdown, New Zealand decided to take advantage of plummeting case rates and aimed for elimination. When the virus reappeared in August due to a mysterious family cluster, the country quickly restored zero transmission with a targeted lockdown and mandatory masks. Within three weeks, New Zealanders were again living with fewer restrictions than most Canadians.

Inspired by New Zealand’s success, Australia went for zero transmission too. When a major outbreak erupted in the state of Victoria in August — 700 cases a day mostly in Melbourne — the nation kept the virus contained. Within 110 days, it achieved zero transmission with a disciplined lockdown that included a night curfew. (Yes, suicides and mental health issues did go up during that lockdown.)

The four TANZAC nations represent half of the world’s eight jurisdictions, including China and Vietnam, committed to measures for eliminating the coronavirus within their borders. Taken together, their population tops more than 1.6 billion people.

The Go for Zero payoff

The benefits of zero transmission once achieved are self-evident. Vulnerable populations do not get sick or die. Hospitals and schools operate normally.  The economy rattles along. Fear is not a constant of daily life. The pandemic edicts and masks disappear.

With a total population of 57 million, TANZANC jurisdictions reported altogether 20 new COVID-19 cases on Oct. 30. In contrast Canada, with 38 million people, had more than 3,000 new cases.

Aiming for zero transmission also had substantial economic benefits by establishing certainty. “Far from sacrificing their economies to get to zero, all TANZANC jurisdictions (except for oil-price hit Newfoundland) project better 2020 economic performance than Canada,” notes the report.

These jurisdictions are all beating the second wave while Europe and America have been overwhelmed again, notes the report. The TANZANC model shows “superior resilience to future COVID waves.”

Over the summer, Australia had a big and raucous debate about what it takes to get there. One notable report, “Go for Zero,” summed up what is at stake: “Ideally, lockdowns are only done once and done well. The benefit of zero is to reduce the risk of ‘yo-yoing’ between virus flare-ups and further lockdowns to contain them.”

What would the TANZANC model look like if applied across Canada?

Starting with a national commitment, it would apply the measures that work. Tight border controls and effective quarantines; rigorous test, trace and isolate protocols with quarantine hotels; schools with proper risk measures including fewer students in a room; mandatory masking; engaged citizens.

Some might argue that such a policy doesn’t make sense for Canada as a whole because the country isn’t an island. (We do have oceans on three sides of us.)

But the Maritimes aren’t an island either. They have neighbours with raging epidemics on their borders including the United States and Quebec.

The epidemiologist Michael Baker, the architect of New Zealand’s “go hard and go early” policy, recently told the New York Times that many politicians are allergic to an elimination policy.

As a consequence they have “adopted the approach of complacent exceptionalism — that they wouldn’t get the virus, or it wouldn’t be as severe as they thought, and the pandemic has proved them wrong.”

A choice worthy of debate

“It is ironic how much time and energy were spent debating the Swedish Model — with its decidedly mixed results — while a much more successful approach was being modelled here in Canada with virtually no comment at all,” says the Global Canada report.

In fact Sweden, home to a laissez faire strategy, is being hard hit by the second wave. It is experiencing higher levels of infections, hospitalizations and deaths than its Nordic neighbours.

Right now a lot of Swedes might wish they lived in Australia.

The Global Canada report, whose data is updated regularly, concludes that there is no real reason why a rich and organized country such as Canada can’t apply “all necessary TANZANC policies if there is the political will.”

In fact, for a brief window of time, much of Canada stood well poised to get to zero. Last summer the provinces of B.C., Manitoba and Saskatchewan, representing 23 per cent of Canada’s territory and 20 per cent of its population, nearly achieved no COVID spread. 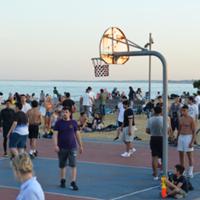 ‘Herd Immunity’ Is an Inviting Idea but Terrible Policy

But these provinces didn’t go the extra distance. And because Canada lacks a national policy mandating Go for Zero measures, each province — except for Atlantic Canada and the North, felt pressure to emulate others who were coasting. Now we are reaping the results.

But it would be a mistake to ignore how close those three provinces came to proving Go for Zero could work.

Vancouver Island, for instance, has so low a transmission rate it could have become another New Zealand had it seized the moment.

COVID-19 is not going to fade away on its own. Expect more waves before an effective vaccine can be produced in large enough quantities or adequately distributed to Canadians by the end of 2021.

Canadian politicians have behaved so incompetently in recent months that tough lockdowns in much of the country are now all but guaranteed.

If so, this time the nation must take advantage of resulting reduced transmission rates, and eliminate the virus from our borders.

Canada needs “a rigorous cost-benefit analysis and debate around a zero transmission strategy for Canada,” says the report by Global Canada Initiative. “We cannot afford to throw away our shot a second time.”

A national debate with thousands of life and death consequences. Let it begin immediately.