When Alberta Premier Jason Kenney says small nuclear reactors “could be a game changer in providing safe, zero-emitting, baseload power in many areas of the province,” as he did this week in a tweet, he’s pulling your leg.

For a variety of economic and technical reasons, the scenario Kenney described while retweeting a CBC story about his announcement that Alberta intends to join a four-province effort to develop small nukes is unlikely ever to occur.

Kenney and his government’s officials certainly know this.

This is not a judgment call on whether “small modular reactors” — as the companies proposing manufacturing these things prefer to call them to soothe a public skittish about the word “nuclear” — will perform as advertised. Small nuclear reactors can be built and should be able to be operated reasonably safely.

Nor is it a call on whether nuclear power is the solution to a warming planet or a dystopian nightmare with the potential to make things even worse. There are reasonable voices on both sides of that debate.

The problem is that the economics of the scheme described by Kenney just don’t add up.

Except in a few locations like very remote mines, small nuclear reactors will never make sense from an economic standpoint as long as natural gas is readily available and inexpensive, as it is now in Canada and will likely remain.

Even a modular reactor built by a mature industry selling lots of units would cost more to build and run than a natural-gas powered plant. And right now, there is no approved small reactor design anywhere in the West, and no mature industry to make them.

No electrical utility is ever going to buy one unless they are forced to by government policy or regulation — the kind of thing Alberta’s United Conservative Party purports to oppose. Nor will any bitumen mining company.

Probably the only way to make these things competitive would be to impose a stiff carbon tax that vastly increases the price of natural gas.

Small nuclear reactors are not as cheap to build as the premier’s fairy tale suggests.

Bringing an acceptable small nuclear reactor design all the way from the drawing board to approval by a national nuclear regulatory authority will cost hundreds of millions of dollars.

While dozens of speculative companies are printing colourful brochures with pretty pictures of little nukes being trucked to their destinations, very few are serious ventures with any possibility of building an actual reactor. The United Nations International Atomic Energy Agency says diplomatically there are about 50 concepts “at different stages of development.” Those that are serious, like NuScale Power in the United States, have huge amounts of government money behind them.

The only small nuclear reactor plant known to be operating in the world now is the Akademik Lomonosov, Russia’s floating power barge with two 35-megawatt reactors aboard. From an original estimate of US$140 million in 2006, its cost had ballooned to US$740 million when the vessel was launched last year.

The kind of small reactors Kenney is talking about won’t be cheap by any yardstick.

Small reactors are less economical to run than big reactors.

If a reactor is only producing 300 megawatts of electricity compared to 800 megawatts or more, it’s not going to generate as much profit for its private-sector owners. This is why all reactors getting built nowadays in the world are large — 1,000 to 1,600 megawatts.

This is why nobody wanted to buy the scaled-down CANDU-3 reactor, development of which was paid for by Canadian taxpayers in the 1980s. At 300 megawatts, they were just too small for commercial viability. A working CANDU-3 has never been built.

By the way, in 2011 the Harper government privatized the best commercial assets of Crown-owned Atomic Energy of Canada Ltd. to... wait for it... SNC-Lavalin Group Inc. Think about that every time you hear Conservatives in Ottawa screeching about the goings on at SNC-Lavalin!

With one exception, all current small reactor designs use enriched uranium, and Canada doesn’t produce any. So if we adopted a lot of the small reactors being touted by Kenney right now, we’d be putting our energy supply in the hands of foreigners.

Would putting a large percentage of our national power needs in the hands of other countries be sound policy from the standpoint of security or sovereignty? Not if you’ve been paying attention!

The only exception is the CANDU-3, which SNC-Lavalin recently rebranded as the CANDU SMR. It can run on naturally-occurring uranium like that found in Alberta.

Don’t expect a boom in uranium mining in Alberta, either. There’s a worldwide glut of the stuff. Prices are low. (Sound familiar?) Existing suppliers have invested billions to mine high-grade deposits, and even that production is fetching only depressed prices.

So nobody’s interested in creating new uranium mines in Alberta, probably ever.

Small reactors might be safer than big ones, but we don’t really know.

Kenney and Savage talk about small reactors as if it were a fact they’re safer than big reactors. Maybe they are. But we don’t really know that because nobody but the Russians actually seems to have built one, and in most cases they haven’t even been designed.

Remember, the Russians’ small reactors are both on a barge. For what it’s worth, critics have called it “Floating Chernobyl.”

This is an important consideration. The safety of electricity generation projects, regardless of what kind of fuel they use, needs to be watched over by accountable, responsible, and, yes, properly paid public employees.

This runs counter to the philosophy of all four governments — Alberta, Saskatchewan, Ontario and New Brunswick — involved in the interprovincial effort to encourage the development of small nukes.

With the potential effects of a nuclear disaster so long lasting, can we trust industry to regulate itself? More importantly, can we trust an Alberta United Conservative Party government not to hand regulation of these plants to the for-profit companies that would operate them?

Then there’s the matter of waste disposal.

Nuclear plants don’t produce a lot of waste by volume, but what there is sure has the potential to cause problems for a very long time. Thousands of years and more. So safe storage is an issue with small nukes, just like it is with big ones.

Where are we going to store the waste from all these wonderful small nuclear reactors Kenney is talking about?

Canada created the Nuclear Waste Management Organization to find a “willing host community” for a deep geological repository capable of storing nuclear waste for thousands of years. Almost nobody wants the stuff, for obvious reasons. Does any Alberta community want to put up its hand?

“More research and development work is required on the fuel cycle for some SMR technologies,” the UN’s atomic energy agency notes cautiously.

Alternatively, spent fuel could be reprocessed in fast reactors. But why do that when natural uranium prices, just like oil prices, are in the bargain basement, making fast reactors uneconomical? What are we going to do to raise prices? Build a uranium pipeline?

None of this sounds like the basis of an exciting new industry for Alberta. On the contrary, there’s a whiff of scam about the whole effort to proselytize the idea of a small reactor manufacturing industry, which wouldn’t be located in Alberta anyway, and more uranium mining, which isn’t going to happen.

The timing of last Friday’s announcement was certainly intended as a distraction from the disastrous announcement of the results of a curriculum review the day before. 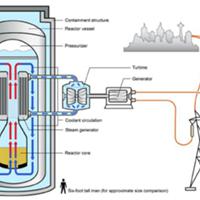 Are Thousands of New Nuclear Generators in Canada’s Future?

But arguably the whole agreement to join the other provinces in the initiative is a distraction too, a way to tell citizens and foreign investors fretting about global climate change, “Don’t worry about it, we’re working on it.”

Ontario has a big nuclear industry with lots of private employers and a large workforce, so for a modest investment joining the small nukes initiative looks good for Premier Doug Ford.

How many jobs is it likely to create here in Western Canada? Well, Saskatchewan’s Ministry of Environment recently posted a job for a director of small modular reactors. That person will supervise four people. That’s probably about it for jobs for the foreseeable future.

If Alberta ever ends up with the same number of people working on this, we’ll be lucky.