In trench warfare, before the shock troops go over the top, the artillery softens up the defenders with a barrage at the point of the attack.

In the midst of a great struggle with a mysterious coronavirus that threatens all mankind, we are being subjected to such a barrage by some of the most trusted economic commentators of the neoliberal right.

In a short jeremiad complaining public sector jobs are too secure published in the financial pages of the National Post, Mintz asked, rhetorically, “How about some public sector sacrifice, too?”

I will leave a detailed critique of Mintz’s commentary to economists. Suffice it to say he argues that since there are heavy job losses in the private sector as a result of the worldwide fight to control the spread of COVID-19, there must be corresponding losses and rollbacks in the public sector, too — including, presumably, among the health-care workers we are praising now for their efforts to protect us from the virus.

This is unlikely to be a popular policy prescription with that huge segment of the public that has grown wise to the depredations of neoliberalism’s Shock Doctrine.

On the same day, Stephen Harper published a similar screed behind the paywall of the Wall Street Journal. The former Canadian prime minister argued that “after coronavirus, government will have to shrink.”

Harper, who was never really an economist except in Conservative election brochures, nevertheless uses the bully platform provided by his current position as titular head of the neoliberal internationale to say of most governments’ responses to the coronavirus that “all this intervention has been economically ruinous.”

This is a sneaky and deceptive argument, designed to undermine the Liberal government of Prime Minister Justin Trudeau. After all, the intervention he’s complaining about was designed to keep the economy on life support while COVID-19 threatened our economic and actual lives.

But we expect no less from Harper, whose habits are familiar to Canadian voters if not to the Wall Street Journal’s principal audience south of the Medicine Line.

As it happened, an April 9 article in the National Post by Philip Cross, a “senior fellow” at both the neoliberal Macdonald-Laurier and Fraser “institutes,” was creating a stir in Alberta Wednesday as local politicians retweeted the author’s “modest proposal” to cut public sector pay by 20 per cent.

Despite the National Post headline — “A modest proposal on public service pay…” — it seems unlikely the proposal was intended as Swiftian satire by Cross, another fellow referred to as a “brilliant economist” by Poilievre, whose day job, despite the time he spends on Twitter, is federal Conservative finance critic.

All this stuff is being peddled now, of course, for a reason.

Nationally and internationally, the neoliberal stream of capitalism hopes once again to find way to use the coronavirus catastrophe to implement policies that are the opposite of what ordinary people all over the world are praying for.

Expect to hear “we can’t afford it” a lot whenever policies to save us from some future global pandemic or the depredations of neoliberalism are proposed.

Here in Alberta this poses a special danger because Harper’s acolyte, Jason Kenney, is premier, and our province has the bad luck to be the beachhead for their destructive plans.

Mintz, another Fraser Institute fellow, was appointed in March to lead Kenney’s “emergency economic panel” to create policies to counter the collapse in oil prices that struck just as COVID-19 began its march through Canada. Harper, troublingly, is also a member of that group.

Mintz already has a history of telegraphing Kenney’s punches through his writing, as he famously did when he co-authored a paper in 2017 with Janice MacKinnon, a former Saskatchewan finance minister, calling for legislated rollbacks in public sector salaries in Alberta. 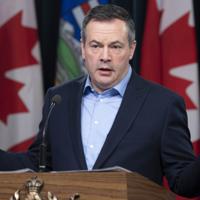 As Other Leaders Support Public Workers, Kenney Kicks Them When They’re Down

After Kenney’s United Conservative Party won the election in 2019, MacKinnon was appointed to lead a “blue ribbon panel” that, lo and behold, recommended pretty much what she had proposed with Mintz.

It hardly strains credulity to predict Harper’s and Mintz’s bloviations this week foretell exactly what Albertans are going to face when Kenney’s emergency panel reports.

As I’ve argued before, Mintz is likely to recommend exactly what Alberta doesn’t need in response to a recession — lower taxes for the already wealthy, more privatization, elimination of public sector jobs, use of legislation to force frontline public sector workers to take pay cuts, elimination of regulations that protect workers and citizens (from COVID-19, among other things), the usual neoliberal bromides.

The same can be said of Harper, with a cynical strategy tossed in to somehow use federal money to keep Alberta afloat while portraying the resulting national deficit and debt as a disaster, the better to take back Parliament Hill.

But first, Albertans will have to face austerity on steroids. We are being softened up for it now.